When we last left the X-treme X-men, they had travelled to the Savage Land along with a band of  American born reptile people who wanted to start a new life there. Unfortunately, the team ran into some old enemies as Brain Child and his Savage Land Mutates caused a cave in that crashed the X-men's Black Bird jet.

Brain Child decided to stir up conflict between the human settlers of the Savage Land and their Saurid neighbors, hoping to benefit from the ensuing war and grab control. But he wasn't above personal vendettas considering he kidnapped Storm to settle some old bets and use a little mind control to boot.

Storm was valiant and defiant as always, but Brain Child's promise to have her betray everything she ever cherished in favor of loving the passion and cruelty of murder wasn't exactly an empty one... Just look what being subjected to the primeval genius' experiments can do to you... 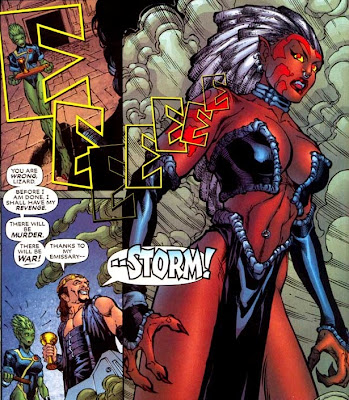 Yup, in a move reminiscent of his first run in with the X-men back in 1982's Marvel Fanfare, Brain Child had used his machinery to devolve the X-men's leader to a more primal, bloodthirsty warrior version of herself. Dressed in war paint, with claws and featers for hair... the pierced Storm was now evil and that means dressing up in black leather and wearing a slave collar...

But, bless her for trying, she still tried to resist her reprogramming... 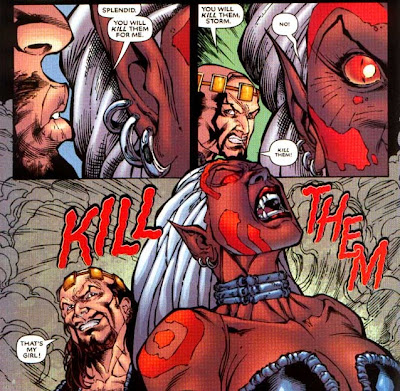 Some of the other X-men had been captured by Brain Child as well. But they had to deal with his female operatives, both capable of controlling minds and binding people to their wills. Here's why Leash is called Leash... 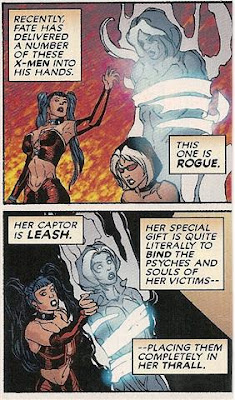 Unfortunately, Rogue's powers made it impossible for Leash to control her. A shame... But for those of you rereading the arc, it's never explained how Rogue became a prisoner of Brain Child by issue 3 of the mini, let alone how she esacped captivity. A couple of pages after Leash's failed attempt at mind controlling her, she just shows up at the village the other X-men have been staying at without mentioning what just happened to her. Weird.

Still, doesn't it look like she borrowed some of her clothes to Brain Child when he he needed a new outfit for the devolved Storm? Speaking of primal girls in skimpy clothes, the second sexy slaver is the lupine woman called Lupa, who revealed herself to be working for the evil mastermind as well.... 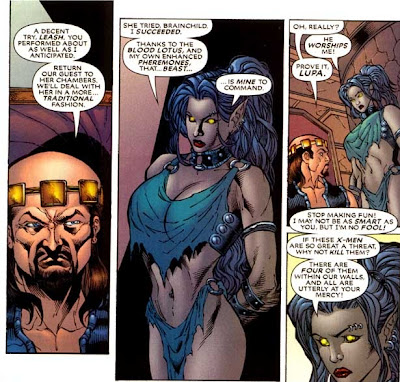 "If these X-men are so great a threat why not kill them? There are four of them within our walls."

Say what? There's Storm and for some reason Rogue, but who are the other two? Bishop and Sage remain with the Saurid kids inside the crashed Blackbird, trying to get the plane operational... While Thunderbird and Beast are in the village, so that's everyone accounted for, right?

And just how Lupa manages to leave and return to the village undetected... not to mention in time to join the X-men and the human warriors in a final battle against the Saurids isn't revealed. She's just there... Shoddy writing at its worst.

Speaking of shoddy, the eventual confrontation between human and saurid warriors is tepid at best. There's a few nice panels with velociraptors tearing into whatever moves, but in the end Rogue forces both parties to settle their differences and make peace. She even has them shake on it.

That concludes issue # 3, so with one more 22 page fun filled fest to go, let's see how all of this is wrapped up in the third and final part of The Land That Mind Control Never Forgot: Savage Send Offs
Posted by Clarmindcontrol at 12:00 AM