What If... You Used Some Mind Control? 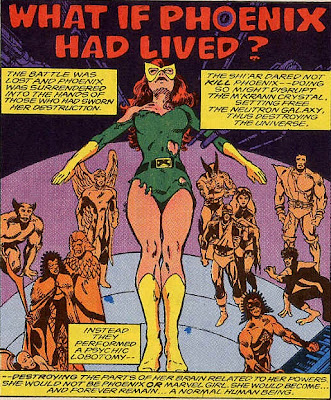 It's no big secret Chris Claremont had originally planned to spare Jean Grey's life at the end of the classic Dark Phoenix Saga. After losing their fight with the Shi'ar Imperial Guard on the Moon, Jean was to undergo a psychic lobotomy, a "procedure that destroyed the parts of her brain related to her powers" after which she would be sent on her merry way.

At the 11th hour, Marvel editor in chief Jim Shooter balked at this notion, claiming that Jean would have to pay for the crimes of Dark Phoenix (destroying a star, blowing up a planet, y'know, little misdemeanors like that). So Jean had to die, by her own hand, forcing Claremont and Byrne to rethink the long term planning for the book on the fly.

Luckily, the What If?-series allowed Claremont to answer that one question fans had: what if Phoenix had lived? The story shown in What If? # 32 largely followed Claremont's original plans. Chris had always wanted Scott and Jean to leave the team after the affair with the Phoenix. Settling down and enjoying a normal life for a few months, their relative peace and quiet ended with the late night arrival of their oldest foe. 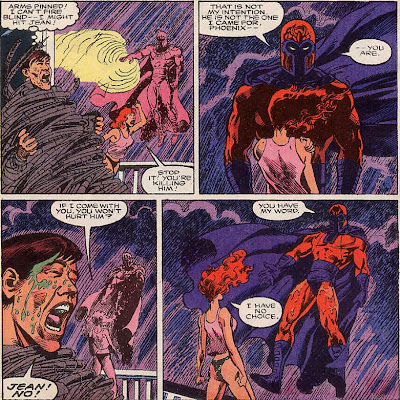 In Claremont's original plans, Magneto would also show up around Uncanny X-men # 150 to make Jean a very similar proposal... 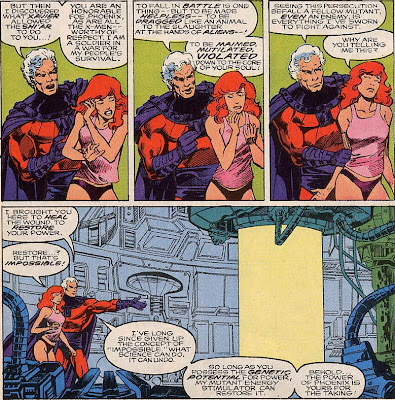 Magneto offered to restore Jean's powers and she was tempted to say the least. The loss of her telepathy had severely handicapped her. She even likened it to missing a sense or a limb. She felt locked inside her head, like her own mind was a prison cell. So, why wouldn't she accept it? Let's see what she did. 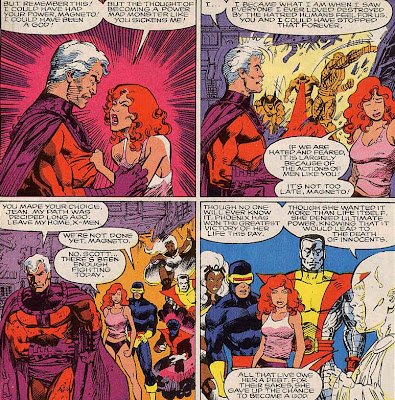 Jean's refusal was a part of Claremont's outline as well. Her choice influenced Magneto to rethink his evil ways somewhat, a move not too dissimilar from what happened in the 'real' Uncanny X-men # 150. In that issue, the X-men also faced Magneto who threatened the entire world in his classic silver age mad villain sort of way... But revealing a sudden humanity when he was shocked to learn his 'evil' actions caused the X-men's youngest member Kitty Pryde considerable harm. 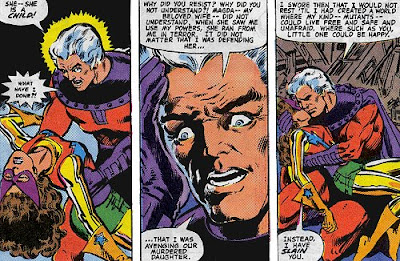 Getting back to the alternate reality at hand... After their adventure against Magneto, Jean felt more at peace and ready to move on with her life. Returning to college and graduating with a degree in education, she joined Professor Xavier's School For Gifted Youngsters as a teacher to the New Mutants...

And speaking of new mutants, not too long after that she gave birth to a baby girl named Rachel. Everything seemed to be going Jean's way... that is, until several months later tragedy struck again. 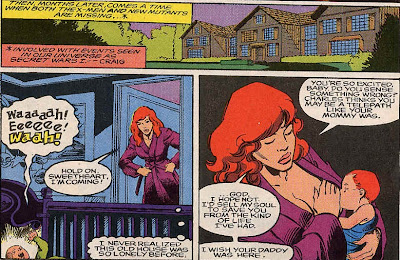 Much to her surprise Scott actually shows up. Sort of. Turns out, she's being mind controlled by a very familiar old foe... Mastermind. 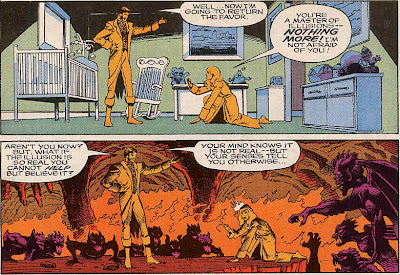 Mastermind's illusions are intense and powerful... even slightly disturbing... Watch for the melting infant with the spike sticking out of her eye... 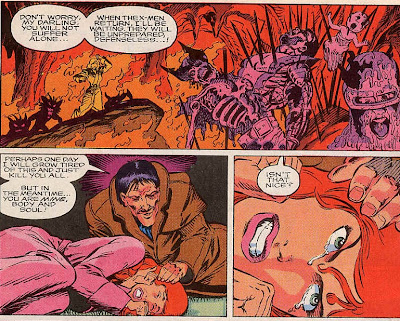 But in the meantime... you are mine, body and soul!"

Apparently, Jean didn't think that was too nice and she heroically fought back against Mastermind's illusion, even knocking him out. However, all that did was reveal the true villain... 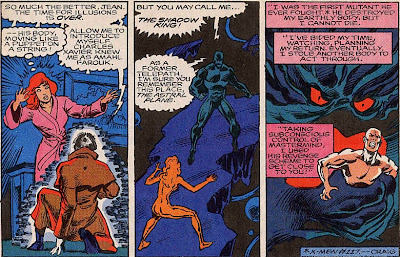 Ahhh, yeah... It's the granddaddy of all things mind control... The Shadow King. He had been watching Jean from the shadows, slowly taking over Mastermind's mind, biding his time until the right moment presented itself... And with the X-men and New Mutants off to fight in the first Secret Wars, he finally made his move.

Jean thought the Shadow King was after her. 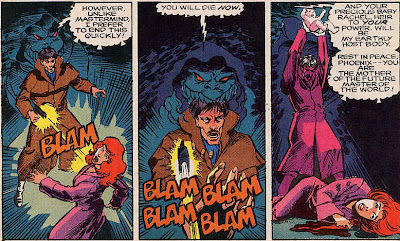 The Shadow King controlled Mastermind took off with baby Rachel, leaving Jean dead on the floor of the nursery. However, this is where we find out 'Jean' isn't really Jean after all. As established in 616-continuity, the real Jean Grey never became Phoenix.

Marvel Girl turned into Phoenix in X-men # 100, however years later it was revealed that rather than empowering Jean, the force actually assumed Jean's physical form and took over her life, leaving the young girl in a cocoon at the bottom of Jamaica Bay.

The same thing happened here, but the Phoenix had used her own powers to make herself forget she wasn't the real thing (... mind controlling your own mind? That's gotta be a first!). However, dying restored both the Phoenix's memories and powers, leaving her with a horrifying realisation. 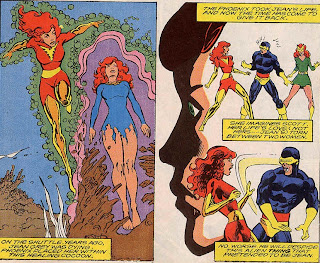 The right thing would be to restore the real Jean to life, allowing her to take over... But that would giving up the life Phoenix had with Scott, not to mention baby Rachel... Could she truly be that noble and heroic? 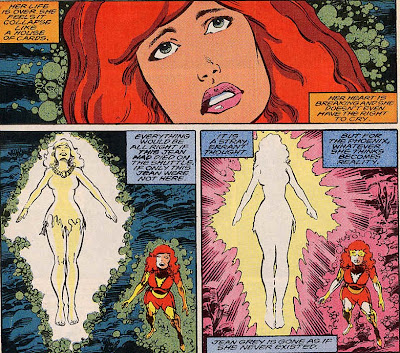 Phoenix essentially murdered Jean... taking over her life forever. And who would ever know, right? The issue ends with a cliffhanger, after all the threat of the Shadow King still had to be dealt with. 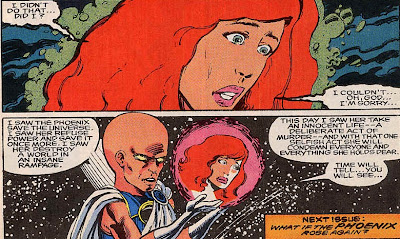 However, that next issue wasn't written by Claremont so let's not go into it that much. Suffice it to say, the Shadow King's powers were no match for the Phoenix' fires... nor were the Sentinels and lord knows what other X-men baddie showed up. Yet, in the end Phoenix realised she was just too powerful and dangerous to remain on Earth... So she choose to leave her life behind in order to save the entire planet.

Posted by Clarmindcontrol at 11:15 PM