Mind Controlling Magik part IV: Salvation Is But A Stepping Disc Away

Part three of Mind Controlling Magik ended with Belasco finally 'liberating' Illyana Rasputin from her protectors, Storm and Cat. Now she could at last start her apprenticeship at the feet of the demon lord.

Of course, there's no such thing as a free lunch... The price for Belasco taking you under his wing is literally your soul. When they first met, Belasco took part of Illyana's soul to create the first bloodstone, now she has to repay him by creating the second stone herself... willingly sacrificing herself even more. And that was just the first day! 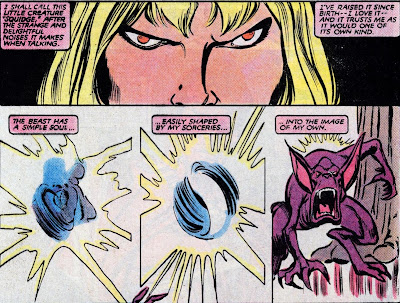 Belasco's teachings focused on Illyana warping life to its most darkest possible outcome, as this unfortunate 'Squidge' showed. Despite having three chunks of her soul corrupted by evil, Illyana still felt bad about what she had become... let alone about what she still was to do.

Alone in her appartments, Illyana realised she was more than just Belasco's demonic sorceror apprentice... Just like her brother Peter, she possessed certain mutant abilities. While she couldn't turn to solid steel like Peter, she was however able to control the light circles that plagued Limbo, circles of energy that teleported people caught in them all across space and time... Quickly mastering them, she teleported both herself and her bedroom...

However, fate and interdimensional crosstime *can* be a cruel mistress as Illyana's initial attempts at teleportation caused a rather interesting run in with her future teammates... the New Mutants. 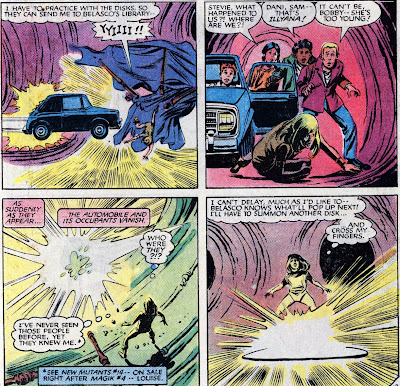 However, as Illyana teleported away, that scene would appear rather differently from the New Mutants' point of view. 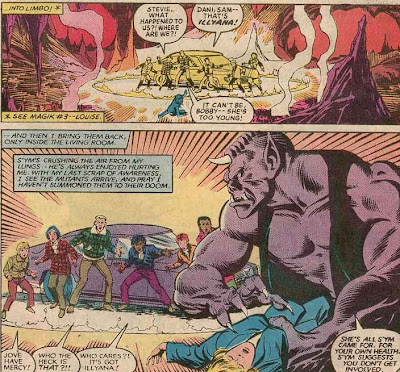 For some reason, their appearance in Magik # 3 was little more than a stop along the way to appear in New Mutants # 14, cover dated April 1984... close to two months ahead of schedule. A nice piece of foreshadowing and a prime example of making interlocked continuity work for you. But what had happened to Illyana after her blind jump?

Well, seconds after her jump Illyana learned another aspect of her powers. Not only was she able to teleport across space, time also seemed to be a factor as she arrived in Belasco's demonic lore library. Her destination was right on the money, the timing could use a little work. She arrived decades in the past, just as a still relatively young Storm faced off against Belasco. 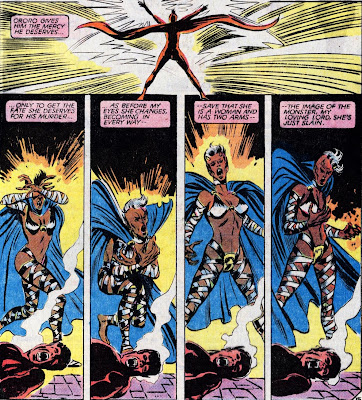 After using her mutant abilities to kill Belasco, Storm underwent a sudden change... her innocence giving way to a new form, more atune to Belasco's demonic tendencies. Which is odd, after all, she just killed the demon lord of Limbo, right? 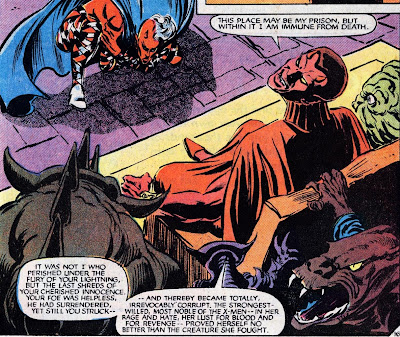 Fraid not... Belasco had used a cheap parlor trick and replaced himself with an innocent man. By attacking and killing him, Storm unwittingly lost most of her humanity, causing her to revert to a demon... Much to Belasco's pleasure.

However, this sojourn into the past was nothing but a warning about things occuring in the here and now. An enraged but ancient Ororo was attacking Belasco, ready to take Illyana back again but already convinced she was no match for him. As the old woman lay dying, Belasco forced Magik to kill her, thereby revealing his secondary motive... the creation of the third bloodstone. 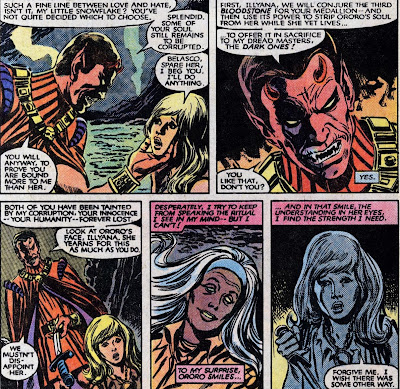 "Splendid. Some of your soul still remains to be corrupted."

After being forced to kill her former mentor Storm, Illyana goes on a bit of a rampage. Using her stepping discs to escape, darting across Limbo with Storm's body to give her a proper burial in the glade the former weather witch had created. However, seconds after the funeral a zombified Storm popped up from the rocks that made up her gravesite, followed by the long dead form of her brother Colossus.

A panicked Illyana instinctively calls upon her powers to take her home... Unfortuately for her, home isn't exactly the safe haven she was used to as she manifests in front of her parents' farm in Russia's Ust-Ordinsky collective. Knocking on the door to greet her parents, Illyana is only met with outrage and dismissal when she exuberantly approaches to hug her mom and dad. They are understandably confused and dismissive. How can this teenage girl possibly be their tiny snowflake?

Demoralised, Illyana doesn't even put up a fight when Belasco and his minions arrive to claim and torture her. 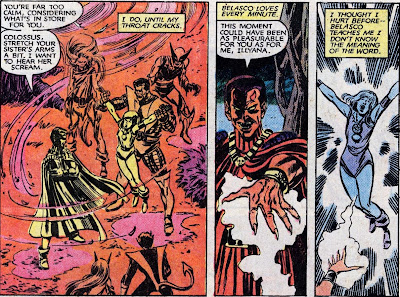 Of course, this punishment also involves a little bit of mind control for the heck of it... 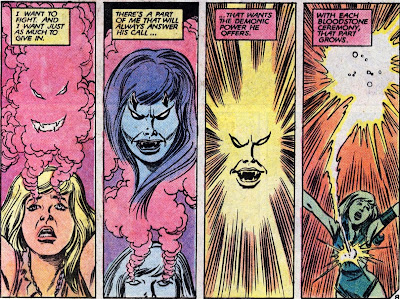 After draining the third bloodstone from her, Belasco decides Illyana ought to languish in exile for a while before he summoned her to create the fourth stone. This basically meant Illyana was allowed free reign, which isn't the smartest decision considering how devilishly devious Belasco had been making her for years now...

A drained and starving Illyana picked herself up for a little road trip on foot across Limbo, travelling towards Storm's abandoned glade. There, she sits by Ororo's ancient oak tree, the symbol of the wind rider's white magic. Trying a few of the white magic cantations Storm taught her, Illyana soon realised she had been irrevocably corrupted by Belasco's deviltry. However, she also made a discovery that would allow her ultimate freedom... something that had been there all along... 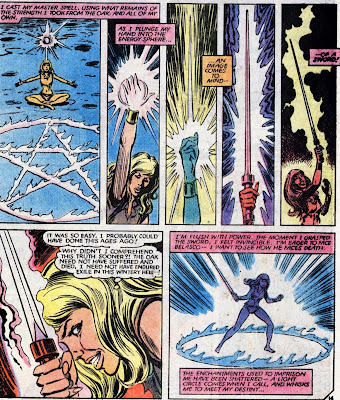 Finally attaining a weapon capable of dealing Belasco some serious damage, Magik teleported to his inner sanctum and fought the lord of Limbo. Her sword, capable of breaking any and all magic spells, soon gave her the upper hand, causing a remarkable change to take place between her and Belasco... 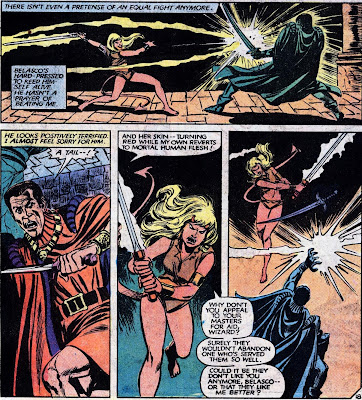 In Limbo, even winning is losing... As Illyana proceeded to beat Belasco, she turned more and more into the person she hated all along... Belasco's demonic features transferred to her, grooming the girl to be the next ruler of the demon realm... If only she'd deliver the killing blow! 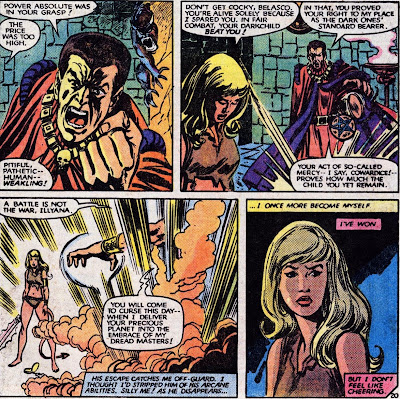 In defeating Belasco, Illyana also drove him from the throne of Limbo... In effect making her the new ruler of the realm. But other matters weighed heavily on the young demon sorceress' head... as she decided to fulfill the promise of a seemingly unavoidable timeloop as best she knew how... 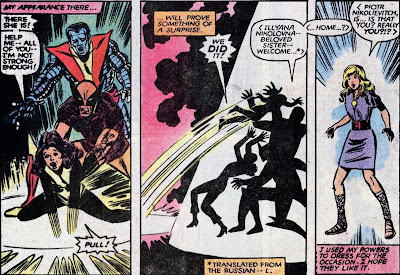 "I used my powers to dress for the occasion. I hope they like it."

... Well, Illyana, for my money... I know the mind control fetishists sure as Limbo liked it!

Posted by Clarmindcontrol at 1:33 AM