Mind Control On The Toad To Nowhere

Today's short but sweet entry serves as both a prequel and a dovetail to the previous God Loves But Mind Control Still Kills threeparter.

After his initial return to the X-books in 2000, Chris Claremont was asked to incorporate the events of the first X-men movie into mainstream comics. The bulk of the work was taken care of by Fabien Nicieza who penned X-men Forever, a continuity heavy limited series that featured Phoenix and Iceman teaming up with established baddies Juggernaut, Mystique and the Toad.

By the end of the mini, the events had miraculously *cough* caused Mystique and Toad to transform from their ever familiar form in comics to the look of their movie counterparts. 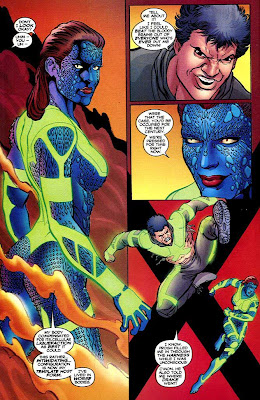 So... how did the reimagined Mystique (now with 80 percent more scales and spikes!) and the new model Toad for the 2000s go over? Well, the fact yours truly has to remind you they ever existed ought to tell you enough. Still, Claremont tried to work with the new status quo when he set up a subplot with them in X-men # 106... 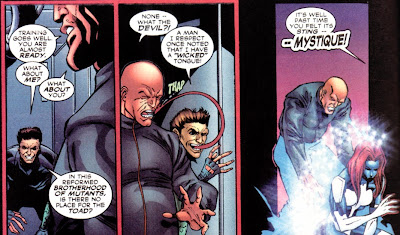 Yup, the new and improved Toad is no longer interested in taking orders from his bald broterhood bootcamp trainer and he uses his newly discovered, chemically rich tongue to the best of his abilities... first by forcing Mystique to reveal her true form and then, just to prove this is still a Chris Claremont comic, by adding a little hot mind control to the mix... 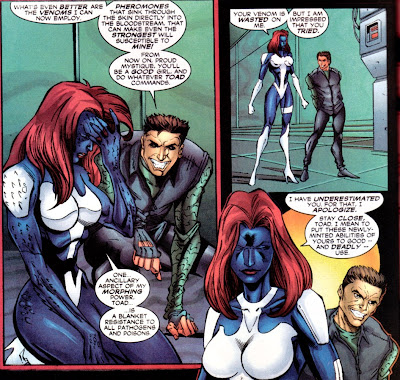 Toad's attempt to control her with his newly discovered pheromone powers suitably impress Mystique, earning him a spot in her new Brotherhood of Evil Mutants after all. But let's review the panels without the dialogue.

For one thing, apparently that single lick caused the disappearance of Mystique's new, spikey template host (only a matter of time, considering how complicated a look that would be to keep consistent from panel to panel).

But more importantly: judging from the art, it seems there might have been a last minute change of plans. Consider Mystique's submissive kneeling position, head held down and eyes closed, while Toad triumphantly stands next to her grinning all the way.

Still, all that alledged mind control went nowhere. This particular incarnation of the Brotherhood (including a new Crimson Commando and a speedster called Sabre) is never seen again. Mystique and Toad next appear as the Brotherhood a few months down the line when all that nutty forced movie adaptation was over and done with... 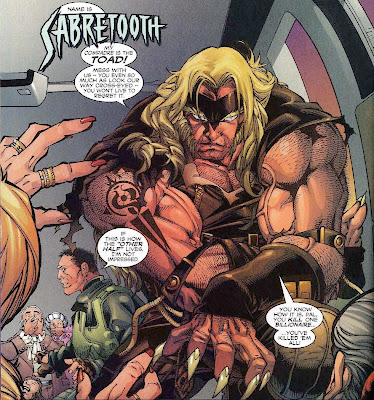 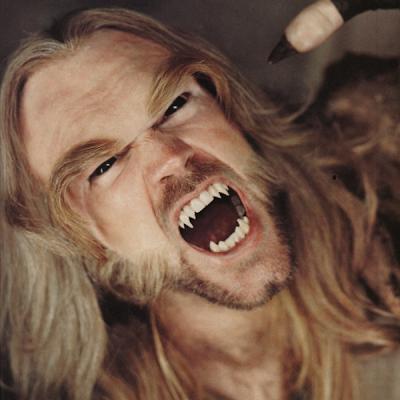 Posted by Clarmindcontrol at 12:42 AM