Mind Controlling Magik part I: Seduction of the innocent

Everyone's story has a beginning and this is how Chris Claremont started the corruption of Illyana Rasputin. Many a tale would flow from the humble beginnings in Uncanny X-men # 160, a story so rife with suggestive themes and downright offensive scenes it might as well have been sold in a discreet, brown paper bag. 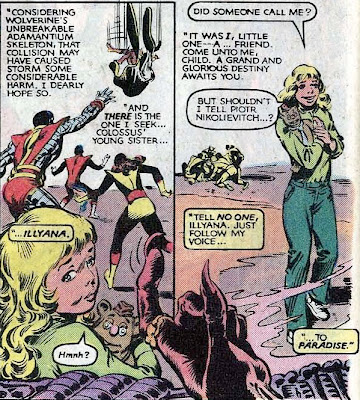 The issue starts with 8 year old Illyana watching the X-men's first proper training in their temporary headquarters, formerly Magneto's island base in the Bermuda triangle. Nothing out of the ordinairy, until suddenly every parents' nightmare scenario comes true: a stranger lures the little girl towards him, urging her to tell no one, because it's their little secret. Luckily, Kitty notices her leaving. 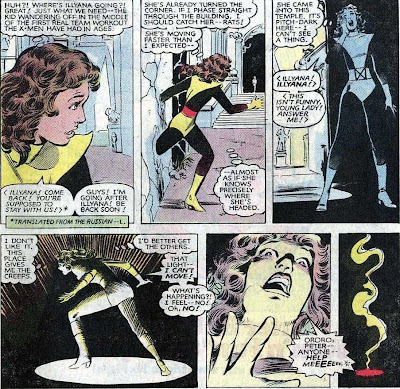 So, that's both Illyana and the X-men's 13 year old member vanishing into thin air right under the team's collective nose. It takes the others a while to notice they are missing, mostly because the training had a rather unexpected aftermath. Especially Storm isn't quite herself, as the others note.

How's that for quick exposition? Storm was recovering from being mind controlled by Dracula, and was afraid to sleep, fearing she was still vulnerable to the curse of the vampyr... Worse yet: she might enjoy life as a vampire. Looking for a quick way to change the subject, Storm decided to take a little shower as only a weather goddess can... 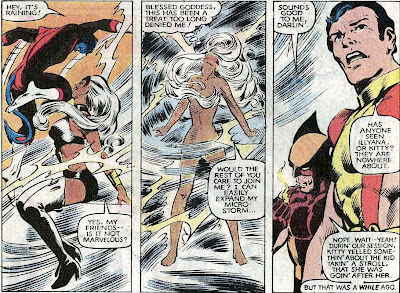 "Would the rest of you care to join me? I can easily expand my micro-storm..."

Having your teammate get naked in front of you can be pretty distracting and a little risque even... But then she also invites the others to join in. Wolverine, judging from the dialogue, was open to it, yet why does the art show him lighting a cigar? Smoking and microp-storm skinny dipping don't mix, usually.

Colossus finally notices both Kitty and his sister are missing and the remaining X-men split up and search the island... They don't find either one of the girls, instead all of them are snatched away by light circles as well.

Speaking of Kitty, her light circle dropped her off inside a strange, dark cave system where she soon encountered a familiar face. 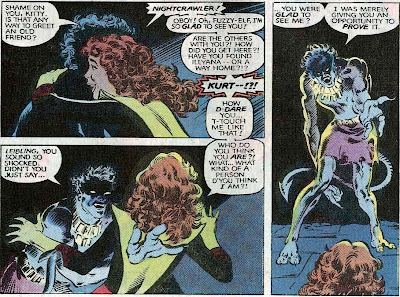 Ow yes, here we have a Nightcrawler counterpart fondling a 13 year old girl. And even when Kitty rebuffs his inappropriate advances, he smugly sneers that he was merely giving her a chance to show him just happy she was to see him. And as if that bit of dialogue wasn't evidence enough, the following panel truly hammers it home... 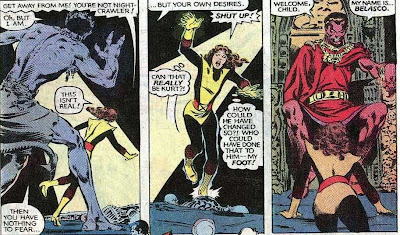 Running away from a Nightcrawler who claims she actually liked his three fingered probing, she trips and lands in the throne room of Belasco, ruler of Limbo. Let's just hope Belasco was wearing underwear, Kitty has been scarred enough for one issue. Oh, there's more?

"Would you like to... play with me, little snowflake?"

Thank heavens for Belasco. But the demon lord didn't just protect Illyana out of the goodness of his heart, no... He needed the little girl for something equally terrible as we'll see in part II of Mind Controlling Magik: Into A Limbo Far & Wide.

Posted by Clarmindcontrol at 2:48 AM