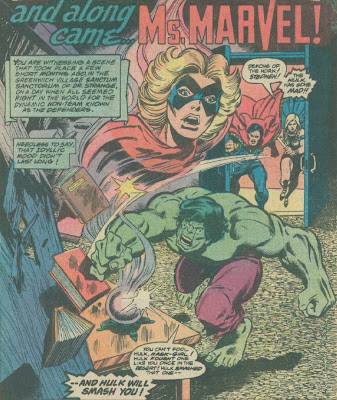 It's the 1970s again as Chris Claremont guest writes an issue of Defenders and even then his signature style was already in place. So roll on the mind control mirth plus half the cast of whatever book he'd been working on as well, Ms. Marvel in this case, thereby making the Defenders feel like guest stars in their own title.

Fair's fair, opening the story with the Hulk smashing an image of Ms. Marvel that had mysteriously appeared is a nice way to pique the readers' interest... You'd think the Defenders would take this emantion serious enough to drop everything and go seek out Ms. Marvel. She might be in mortal danger, right? Instead, the team decided to call it a night and 'maybe look into it tomorrow'. Unfortunately, that 'tomorrow' never came... Wait, let's have Claremont captions explain it all while the story really begins... 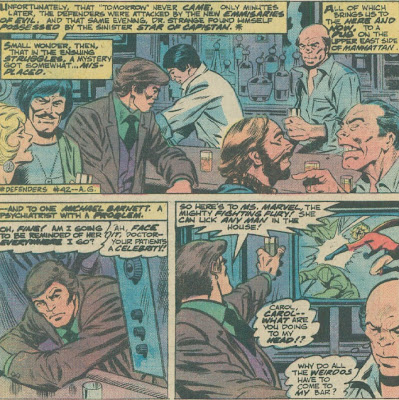 We find psychiatrist Michael Barnett, straight from the Ms. Marvel supporting cast, contemplating his fate. He's feeling down and drowning his sorrows because he's starting to fall in love with his patient Carol Danvers, who he also knows is secretly Ms. Marvel. 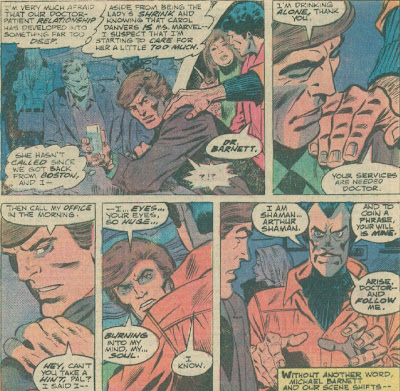 Doctor Barnett really is a terrible doctor. Not only is he totally unconcerned with violating the doctor/patient relationship, he also tells a man who might be a desperate even potentially suicidal person to go take a flying hike. Luckily, the only man in need of help is Barnett himself as the eyes of one Arthur Shaman start to burn into his mind... and soul!

After assuring the mind controlled Barnett he's no longer in command of his will, Shaman takes the good doctor away to a local AIM base. 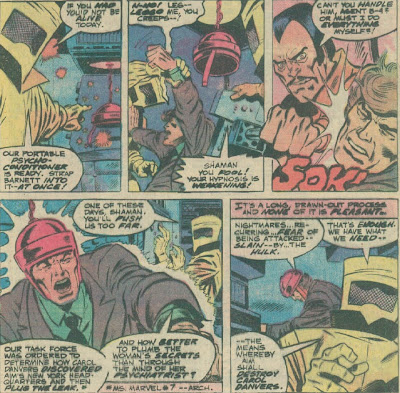 Picking up on a plot thread from Ms. Marvel, AIM still can't figure out how Carol Danvers was able to discover their New York base. So, what does a band of scientific geniuses with mind control equipment do to answer that question? Why... rely on a two bit hypnotist like Shaman to kidnap Carol's psychiatrist and mind control him of course! You know it makes sense.

After what Claremont makes sure we know is a long, drawn-out and thoroughly unpleasant process the beehive hooded brainiacs figure out the way to destroy Carol Danvers: get the Hulk to do it. And on a side note: Barnett KNOWS Carol is Ms. Marvel. What are the odds he didn't spit out that tantalizing tidbit of personal information long before coughing up her fear of the Hulk?

Meanwhile, let's see what the star of the show has been up to... 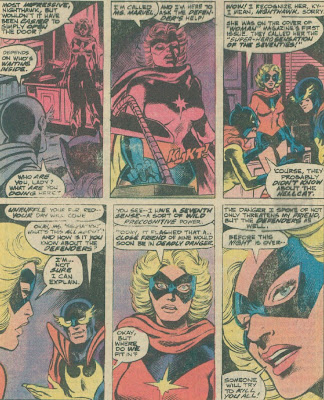 Ms. Marvel's seventh sense had told her both the Defenders and one of her close friends were in mortal danger. So it only makes sense she all but abandons her friends to go help out the Defenders...
A team that has the world's mightiest mortal and the sorceror supreme on the roster. Still, her seventh sense was right on the money as Doctor Strange's house is soon besieged by AIM warcrafts and... this guy. 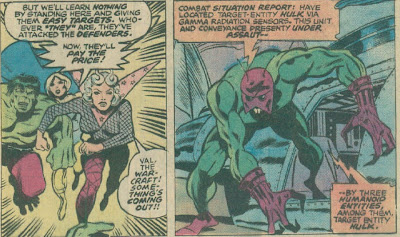 One can't help but wonder what artist George Tuska was thinking when he came up with the design for this combat droid. It looks like Tuska took the Beetle's body armor and slapped on this guy's headgear. 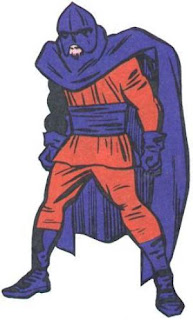 The AIM robot was a little tougher than the X-men's old foe Lucifer. Must be because of the added antenna. It managed to incapacitate most of the Defenders, encasing the Valkyrie within unbreakable crystal, knocking out Clea and flash freezing the one they came for: Hulk. As AIM departed, only Nighthawk and Hellcat were left standing. 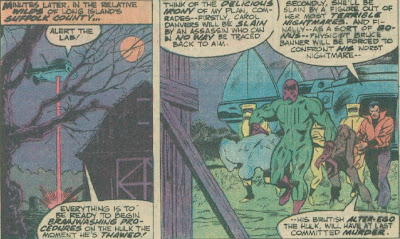 Arthur Shaman must truly be one of the last moustache twirling bad guys, as he raves about the 'delicious irony' of his plan. Still, mind controlling the Hulk to kill a civilian seems about as convoluted as you can get. Not that he even gets a chance to execute his plan because Ms. Marvel, Nighthawk and Hellcat are waiting for the bad guys inside their lab.

Using the element of surprise, the severly underpowered trio manages to beat Shaman, AIM and the robot... which left Chris with only a few panels to clear up one final mystery... Just how did Ms. Marvel's image pop up from the orb of Agamotto months ago? 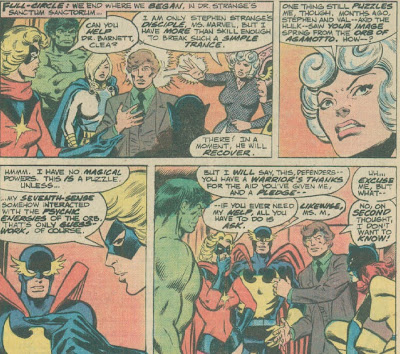 "Hmm. I have no magical powers. This is a puzzle, unless... my seventh-sense somehow interacted with the psychic energies of the orb. That's only guess work, of course."

Posted by Clarmindcontrol at 5:09 PM