It's still the 1970s and a young Chris Claremont is given a prime opportunity to put his writing chops to the test on Marvel Two In One. This mid 70s team up book featuring the Thing proves that old jocular saying among musicians:

"How do you get to Carnegie Hall?"

And oh boy, did Chris Claremont ever practice his mind control moves in the tale he concocted for Marvel Two In One # 9, starring Thing and Thor. 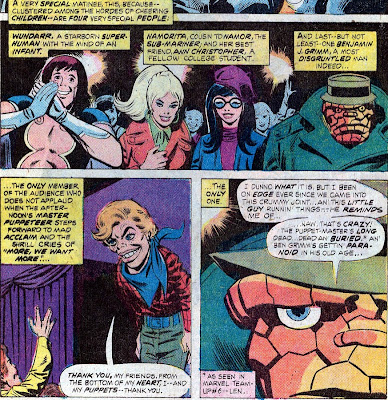 The story opens with Thing at a puppetshow, babysitting the childlike superhuman Wundarr and the decidely not infantile Namorita and Ann, her friend from college. Just why two college students would willingly tag along to a children's show is left unexplained of course.

The Thing finds himself unable to enjoy the show especially when the master puppeteer comes on stage to take a bow. The man reminds Ben of his old enemy Philip Masters, the mind controlling Puppetmaster. But, he died... Right? 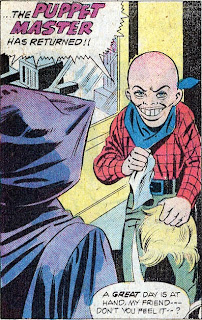 As Philip Masters (rather redundantly) explains to his new, hooded friend... he only survived because  aforementioned stranger found him.. As an added bonus, the mysterious man also possessed certain powers that increased the effectiveness of the Puppet Master's radioactive clay, allowing him to mind control just about everyone. 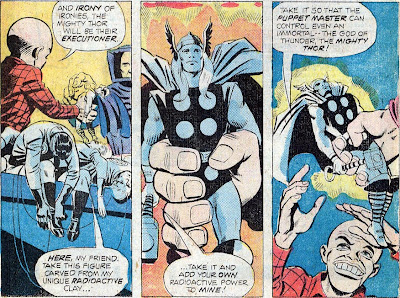 Yup, his clay figurines were now powerful enough to even control someone as mighty as Thor. And in true Claremontian fashion, the take over of the thundergod went with appropriate aplomb. 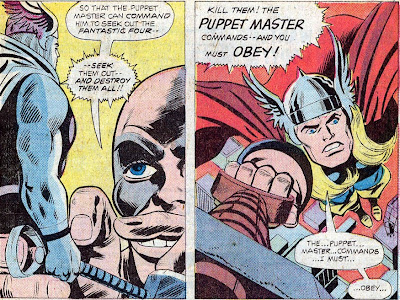 The possessed Thor literally hammered his way inside the Baxter building and knocked around the Fantastic Four, beating them into a pulp with effortless ease. All of them, except the Thing who was still on his playdate with Wundar. But seconds before delivering killing blows, Thor briefly regains control of his mind and forced himself to revert to his human form. 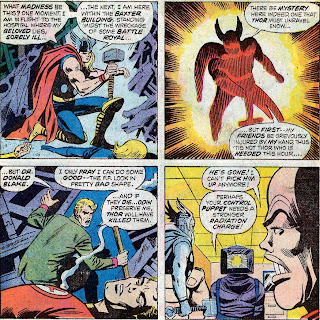 Considering the Puppet Master wasn't aware of Thor's alterego doctor Don Blake, his control vanished instantly. Don Blake tended to the Fantastic Four's injuries, leaving the Thing behind to take care of his teammates. But once Don Blake's form gave way to Thor, the Puppet Master got a hold of him once again. 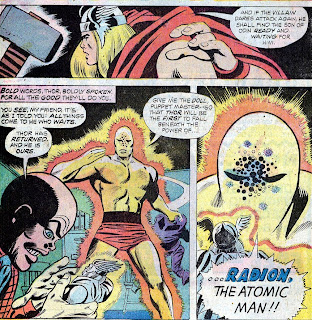 So, just what are the odds a villain using radioactive clay happens to hook up with an equally evil person called Radion, the atomic man? Still, it's not like Thor had a choice in what happened next. 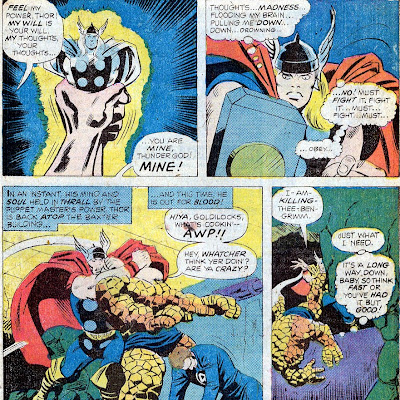 "Feel my power, Thor! My will is your will. My thought's your thoughts... you are mine thundergod! MINE!"

Despite the fact that piece of dialogue sounds a lot like the Puppet Master trying a Vulcan mind meld on Asgard's crown prince, the effects of his suggestion are undeniable. Thor immediately returns to finish the job and Ben Grimm's might initially proves rather ineffective against his immortal enemy's onslaught.

The Puppet Master and Radion are so pleased with all this, they decide to make a personal appearance on the battlefield. 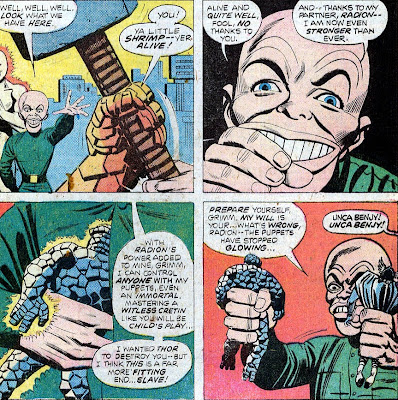 "I wanted Thor to destroy you... but I think this is a far more fitting end... SLAVE!"

Despite all of Puppet Master's admirable bad guy ranting, his puppets stopped glowing because of the deus ex machina of the mid to late 1970s... Wundarr. 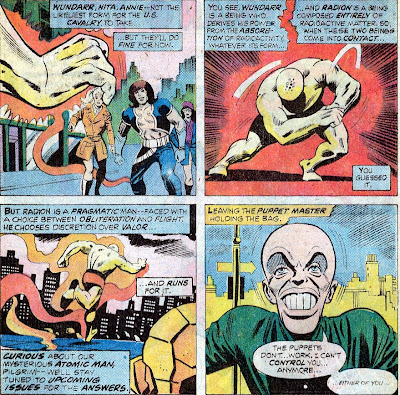 ... So. Yeah. A powerless Puppet Master suddenly has to face his two tremendously threating former playthings Thor and Thing. But before he can surrender, Wundarr decides to take an active role and suddenly dropkicks the helpless Philip Masters into a brick wall...

Knocking him out as the adventure ends with Thor absentmindedly resuming the quest he was on before Chris and the clay dragged him into this particular caper...
Posted by Clarmindcontrol at 12:22 AM