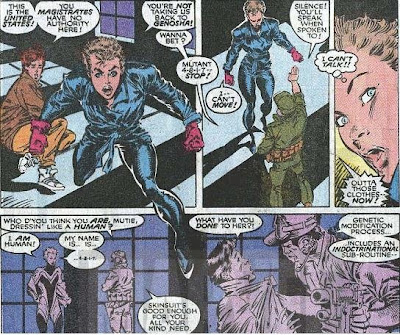 So, lets review, shall we? What do we know about Genosha? Tiny island nation off the coast of Madagascar, gained incredible wealth by manipulating mutants into mutates capable of mining the country's mineral riches... And what do we know about Chris Claremont? Not so tiny writer of comics who frequently uses mind control as an excuse to manipulate characters to act like caricatures of themselves in order to get a fat paycheck.

In this scene, we see how the Genoshan Magistrates control the mutates: not only are they reduced to demi-human state, forced to wear a skintight suit and branded with a number instead of a name... They are also instant S&M slaves. One word from the Magistrate in command and they revert into willingless toys... 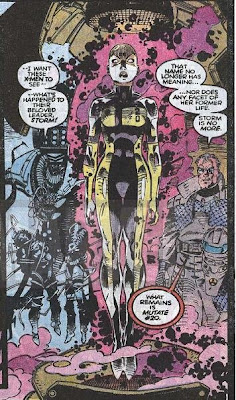 And yes, during the early 90s X-men crossover X-Tinction Agenda Chris Claremont subjected his favourite X-man Storm to the Genoshan mind control technique. Or, Storm... please refer to her as Mutate 20... No, this young black preteen has no will, no name, no way to defend herself from your depraved, sick wants and whims... please be kind... or not... *SIGH*... Now I feel dirty, I need a shower...
Posted by Clarmindcontrol at 11:57 PM 1 comment: 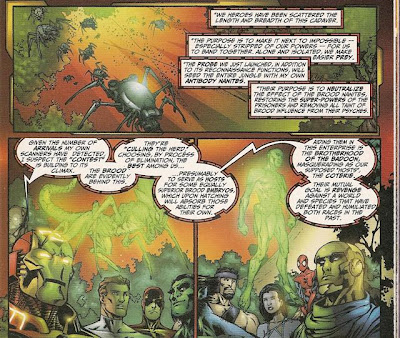 Ow, how time flies. Excuse the long delay in posting (but, judging from both the number of page views and the comments not too many of you noticed I was gone. Its 2009 and Chris Claremont is still writing comics. Oh well, there's something to be said for consistency in the universe. So, to celebrate the new year, lets look back at a comic Claremont wrote back in 1999. These are scenes from the sequel to Contest of Champions, a miniseries from the early 80s.
Contest of Champions only came to be because the Americans withdrew from the 1980s Olympics. Say what? Ow, its quite simple... Marvel Comics had planned to celebrate the 1980 Summer Olympics in Soviet Russia by releasing a limited series in which international heroes competed against each other in a big game. Sounds Olympic enough, right? But then tragedy struck: Russia invaded Afghanistan in 1979 and the US reacted by not competing in the Games.

A nice symbolic gesture, to be sure... But Marvel had about 40 pages of art and story done. So, now what? The answer came when Marvel editor Mark Gruenwald decided to revive the project, using the cosmic gamesman the Grandmaster as impetus for the heroes to fight. When Contest of Champions was released in 1982, it was a big hit... So, it took 17 years for a sequel to be made and who better to write it than Chris Claremont?

Claremont's basic premise: a previously unknown band of aliens known as The Coterie come to Earth and recruit many heroes to prove their mettle against each other. The winners win... wel, something. As it turns out, The Coterie don't actually exist... the real instigators are the Badoon and the Brood, two alien races with a score to settle...

In true Claremontian fashion, the heroes are duped into fighting each other thanks to nannites... a very post modern way of mind control. The second they got kidnapped, they were exposed to mind altering microscopic nannites that made them more agressive and careless. 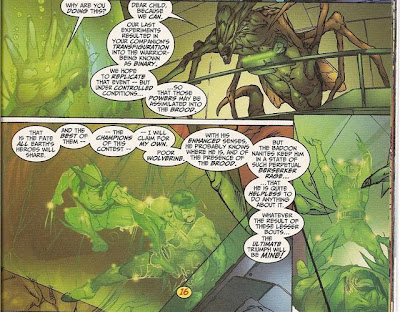 And ow yes, the Brood wanted to implant the winners of the matches with Brood eggs so they could breed the perfect, unbeatable warriors... Of course, they failed... Hey, the good guys still win.
Posted by Clarmindcontrol at 11:13 PM No comments: