The previous two entries featured some of Chris Claremont's earliest writings from the 1970s.

It was a different time for all of us. Heck, most of us weren't even born when neophyte writer Chris Claremont was making a name for himself. He had a lot to learn back then. His storytelling was still a little clunky, his scripting might be a tad too wordy and sometimes the plots were a bit hard to follow. But the man showed promise.

So, let's do the time warp again to see how and if 30+ years of experience had paid off... 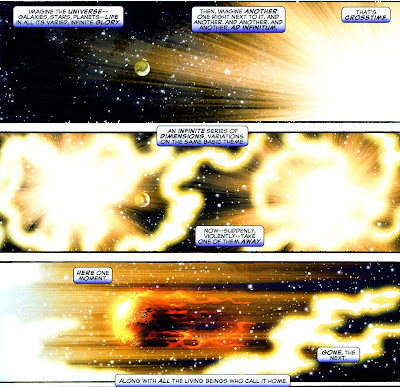 Opening with the death of an entire universe?

*sigh* so much for mastering the art of 'less is more'.

Welcome to the latter half of Claremont's all too brief Exiles run. During their first mission under new management, the Exiles failed in their mission to contain an alternate reality Madame Hydra (Sue Storm) and her cronies to the Earth they had ravaged. Instead, the trio escaped into the omniverse, but not before setting off an explosion that seemingly destroyed that entire reality. 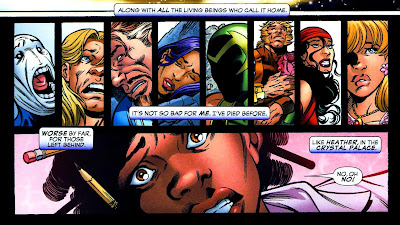 Back at Exiles' headquarters Heather Hudson was forced to watch her comrades perish. Severly depressed, Heather went on a prolonged drinking binge, before finally deciding to leave the Panoptichron, aka the Crystal Palace, altogether.

Before departing to her home dimension, she did however program a digitalised, interactive version of herself should any possible future visitors to the Panoptichron need aid. The minute she left, the Palace's lights went out.

As enticing a dramatic turn this might be for Heather, it all felt a bit futile... Because the readers already knew the Exiles were alive and well. It took the better part of Exiles # 95 to clear all of this up, but the team finally visited Heather's reality where she had reunited with her husband and was an expecting mother. Overjoyed, the team allowed Heather her happy ending as they got ready for their next mission...

Without Heather, the Exiles needed someone to hold down the fort. Their most recent member Psylocke volunteered for the job, waving goodbye to the others who were off to visit a world that was ruled by the Fantastic Four, or a rather interesting take on them: Meet the Four Fantastics and yes, that is Doctor Doom leading them. 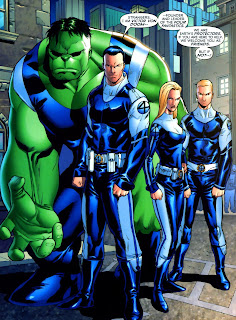 Over the next several issues a lot happened. For one thing, with an alternate reality Fantastic Four ruling the Earth... who else could oppose them but Reed Richards as... The Mole Man? And the fun doesn't end there. Or, actually it does... because Doom had unleashed something in the air that did a real number on the minds of every single person on the planet, as Longshot learned. 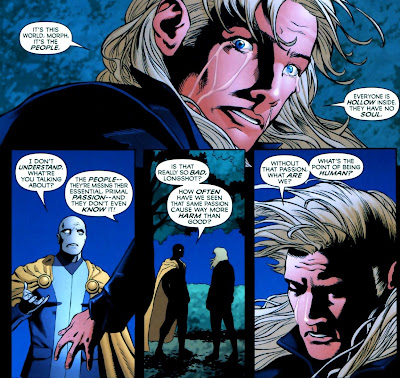 Yup, leave it to Victor von Doom to come up with a way to safeguard humanity... by taking away all that makes mankind unique. Von Doom's pathogen had effectively erased all inclination to having fun or laughing from mankind's genetic make up.

Meanwhile back in the Crystal Palace, Psylocke's monitoring duties get a whole lot more interesting when a young visitor pops in out of the proverbial blue... 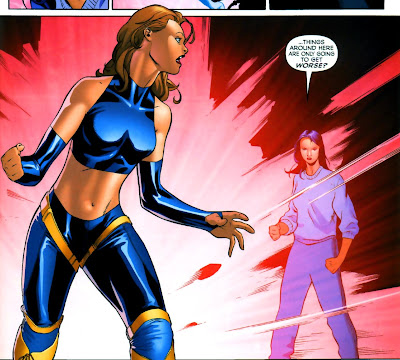 But first there was a new threat to deal with: Victor von Doom had managed to home in on the Exiles' Tallus energies. Copying them, the FF leader was able to send an armed contingent to the Panoptichron so they could claim its technologies for the greater glory of Doom.

Initially succesfull, Von Doom's forces capture both Psylocke and Cat and, to kill a little time, decide to have a little mind control fun while they're at it. 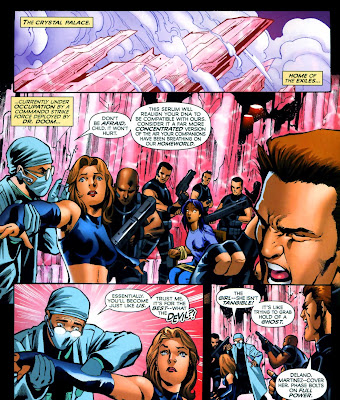 Now, it makes sense for a team of marines going into combat to have a physician in their ranks. But why would any doctor go into battle wearing his surgeon's scrubs and a face mask? So much for camouflage.

Unfortunately, it's hard to stab someone with a needle if that person is intangible. Poor guy, all dressed up for the part and nowhere to go. Meanwhile, Von Doom was facing his nemesis Reed 'Mole Man' Richards in a final confrontation... 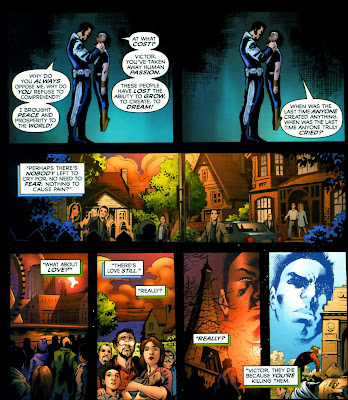 Forget the weird glasses and the Mole Man's hood, this Reed Richards truly is a poet. 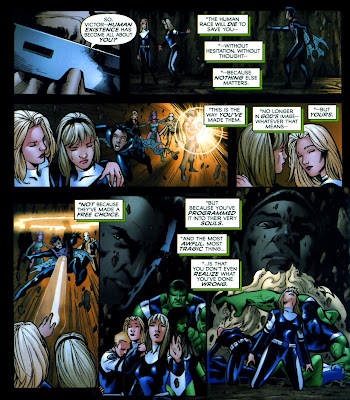 A poet with a bit of a mean streak, as it turns out. When his words failed to sway Doom, Reed Richards took that ol' New Hampshire state motto 'live free or die' a little too literally by blowing up the planet.

How's that for ending a four issue arc filled with characterization and moral dilemmas?
Posted by Clarmindcontrol at 1:11 PM