So, who was selected to kick off this auspicious new title? Considering Chris Claremont was one of Marvel's most popular writers it was pretty much a no-brainer he would write the first arc.

Unfortunately, while the format was new, the plot relied heavily on the old familiar mind control and enslavement shtick. It all started with Spider-Man and Warren Worthington teaming up in the Savage Land to find Karl Lykos, a man who was presumed lost.

Alas, what was supposed to be a relatively simple search & rescue mission turned sour when both Spider-Man and Angel were ambushed and captured by Brain Child and the other Savage Land mutates who subjected them to a little experiment. 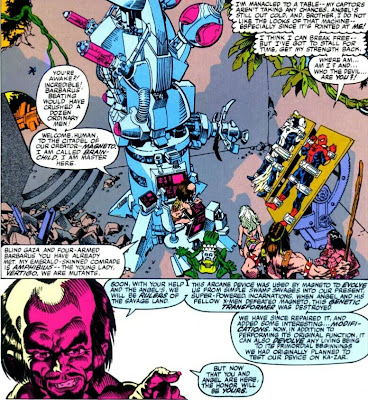 This leads to several interesting mind control and transformation situations.

While Spider-Man fights against his conditioning, Angel fully embraces his new feral state.
In the end, both manage to break free and return to normal.

Alas, the damage was done by then: Lykos was forced to drain Angel's mutant energies, which caused him to revert to the villainous, energy draining man-reptile Sauron.

Time to call in the cavalry... With Spider-Man returning to New York, Angel awaited the arrival of his fellow X-men. Together they set out to deal with Sauron and his henchmen.

After rather easily beating most of the Savage Land Mutates, they made their way to Sauron's island citadel and then this happened. 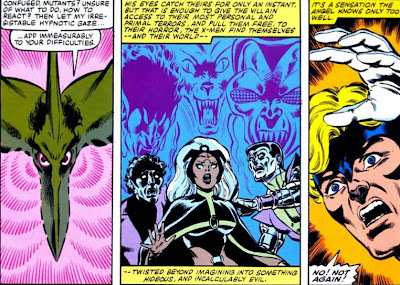 So... Not only have they had their will power silently sapped the second they entered the Savage Land and, now they are subjected to Sauron's mind control hypnosis and will soon get reverted to animalistic versions of themselves thanks to BrainChilds machine? 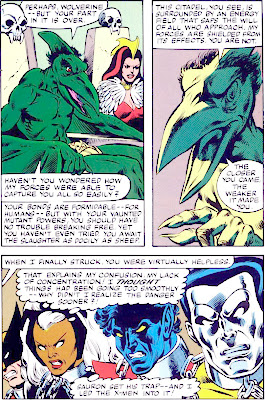 Yes, I do believe we just hit the mind control trifecta. Angel barely managed to evade capture and met up with Ka-Zar. The lord of the Savage Land had a little trouble getting Angel to join him in opposing Sauron.

Warren felt a little jittery going up against the raving reptile. But surely, what are the odds he would mess up and get beaten three times in the same story? 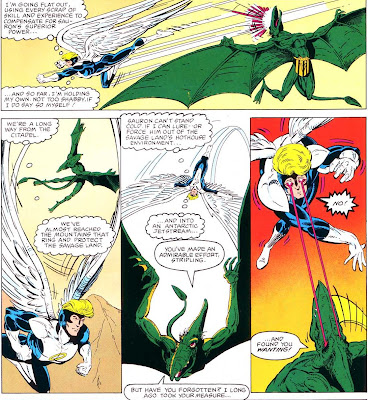 Meanwhile, inside Sauron's citadel, Brain Child had Storm sent up for this particularly disturbing scene. 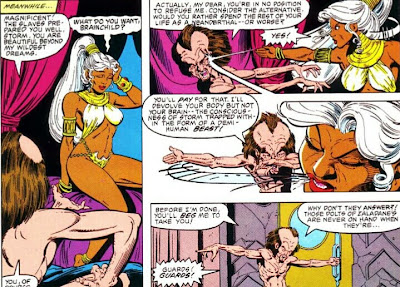 Having a drained, battered and virtually helpless woman dolled up and sent to your room is just... Wrong.

It didn't take long for Storm to knock out her dimunitive stalker. She escaped and freed the other X-men who made short work of both Sauron and his cronies.

All's well that ends well, and despite its obvious mind control involved flaws, the tale is well worth seeking out, if only because it features amazing art by Michael Golden, Dave Cockrum and Paul Smith in their undisputed prime.
Posted by Clarmindcontrol at 2:14 AM