Oddly enough, despite his soft spot for all things magic, Chris Claremont never wrote that many Doctor Strange stories.

However, Claremont did use the sorceror supreme and his assistant Clea in two arcs he wrote during his run on Marvel Team Up. It goes without saying that this tale includes some form of magic inspired mind control.

The first one starts off in Marvel Team up # 77 and is actually rather mundane for Claremont mind control standards... Clea gets herself mind controlled by one of Strange's villains... The Silver Dagger. 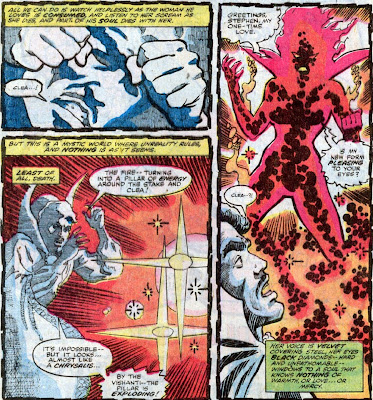 By turning her love for Doctor Strange into hatred, Silver Dagger managed to mind control Clea into attacking... And she was actually winning for a while. 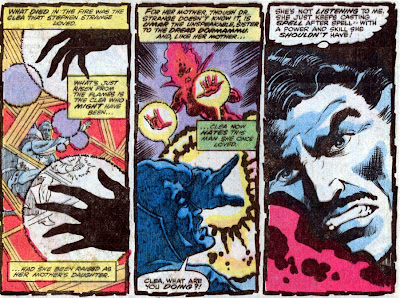 "She's not LISTENING to me."
Needless to say, it didn't take Doctor Strange to long to put his woman back in her place (for her own sake, of course... "You're you again? Great! Now get in that kitchen and let Wong show you how to make me a sandwich!)

To be fair, Claremont didn't waste time telling a tale in which the roles were clearly reversed. It all started with Spider-Man fighting a werewolf that looks remarkably like... Doctor Strange? Spidey manages to defeat his supernatural opponent and decides to bring him to the Greenwich Village abode of Stephen Strange. 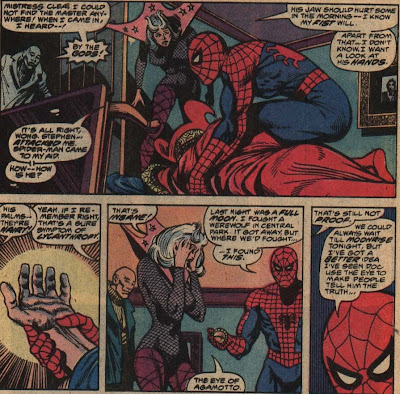 Distraught as she may be, Clea still decides to use the all revealing eye of Agamotto to discover whether or not the werewolf truly is Doctor Strange. This is shown in an intricate and interesting composition of panels that belies the ostensibly simplistic and even crude Mike Vosberg art. 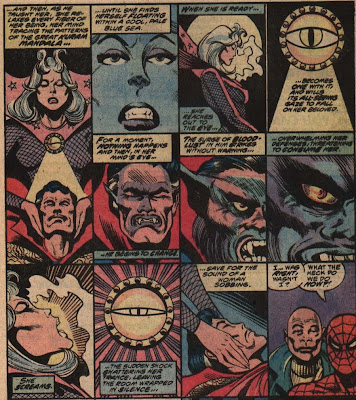 Yes... What DO we do now? Clea discovers the werewolf curse comes from a tribe of Tibetan monks, but before they can be advised, Werewolf By Strange breaks free and starts causing all sorts of mayhem. That is, until the daughter of Satan shows up to help. Satana is there to help free Strange from his lycantrophy or... well... 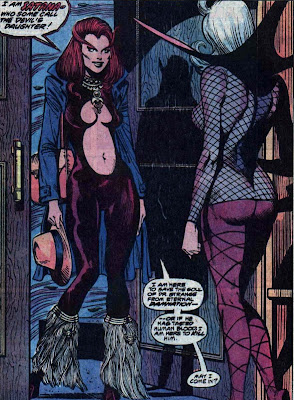 Back in the late 70s, Clea was often portrayed as Doctor Strange's insecure ingenue, his 'gal friday' that needed constant guidance and supervision because she wasn't (yet) ready to handle the burdens and choices a great magician was forced to face.

Yet, when an unknown woman with demon skulls for boot ornaments shows up at her door to inform she's there to either save or kill her boyfriend... Clea doesn't blink and invites her in.

By next issue, Satana has apparently grown horns as she shares her plan of action with Clea. 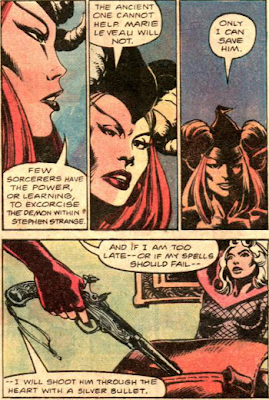 Gotta love that Satana... "I will either save him, or if that doesn't work here's the gun that will kill him. Whatever...I'm covered."

Long story short: during his mystical studies Doctor Strange came into contact with the Shiatra Book of the Damned that caused him to become susceptible to the Were Wolf curse... So, before long he became an agent of the demons on Earth.

But to break Strange free from his curse, a sacrifice was required... Guess who offered up her very life to help free Stephen? 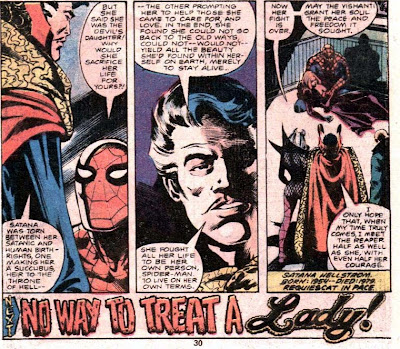 Strange is safe, so is Clea... but still the next issue blurb is right: "No way to treat a lady"

Posted by Clarmindcontrol at 1:50 AM

Before I even get to read the rest of your post, I need to correct your very first sentence, because I think you've missed out on some excellent reading:

Claremont wrote issues 38 to 45 of the "Master of the Mystic Arts" series.

Only 8 issues, but Claremont penned some of the most interesting character insights for the ensemble cast of the title.

All good stuff.
Check 'em out.

Oh yeah... and I should mention:
a little bit of MIND CONTROL takes place in Claremont's run.

So, go hunt the issues down (they were reprinted in Essential Doctor Strange # 4)