What to do with a living legend who mostly seems loved by nostalgia buffs?

Marvel Comics saw itself faced with this question back in 2009 and came up with a simple enough answer: You create an X-men book outside of continuity in which Claremont could tell the stories he would have told if he hadn't been forced out back in 1991.

This title, X-men Forever, turned out to be reasonably succesful, so Marvel approached Claremont to do the same for New Mutants. A book he left back in 1987.  Today's entry comes from that five part mini series, imaginatively called New Mutants Forever.

Lets skip over the story of the mini series. It involves the New Mutants going to Nova Roma, the ancient Roman town in the Brazilian Amazon that time forgot... Only to find that its been taken over by the Red Skull. Everyone's favorite nazi supervillain captured Doug Ramsey and gave him... a little injection. 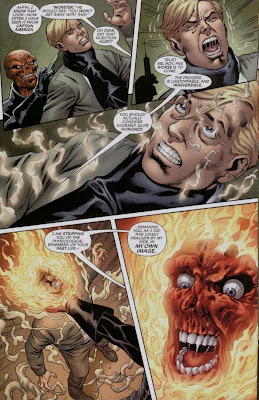 Doug was remade into the Red Skull's own image...So, you know what that means... Ow boy, is his face red, or what?

The Skullified Doug caused all sorts of trouble, naturally... 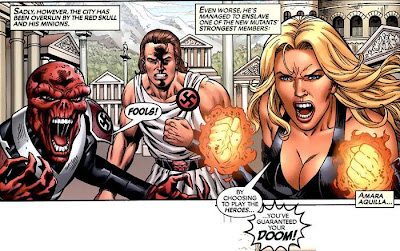 So... in one miniseries... All it takes for three people to get mind controlled, dress themselves in nazi regalia and black leather... is a single injection? Who said this wasn't the marvel age of economy sized tirany?
Posted by Clarmindcontrol at 10:24 PM