Before Chris Claremont focussed his mind control heavy attention to Sage (as chronicled here), there was Rachel Grey, aka Rachel Summers, aka Hound, aka Baby Phoenix aka "oh, never mind who you really are, your mind, heart and soul will belong to someone else by next issue". 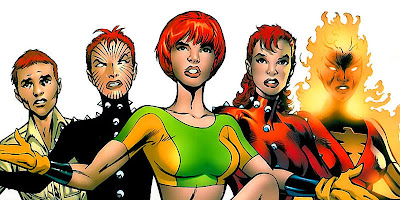 Don't believe me? Well, buckle up for the first of a two parter covering all the occasions Chris Claremont felt it was necessary to mindjack that sweet, innocent red headed girl. Some of these examples have been covered in earlier blogs, but are included here again to tell the complete story.

Rachel made her first appearance in the classic Days of future past storyline back in Uncanny X-men # 141. She was the red headed telepath that used her powers to send Kate Pryde's mind into the past so she could warn the X-men of the imminent assassination of senator Kelly. 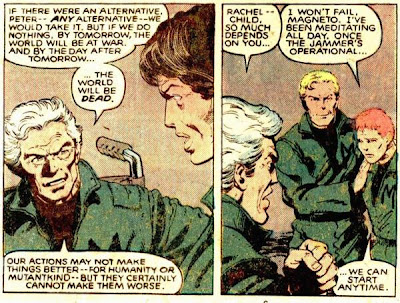 Back then, no mention was made of Rachel's origins. Yet, she really is the daughter of Scott Summers and Jean Grey, born in an alternate future in which Jean (or, rather, the Phoenix force posing as Jean) survived the judgement of the Shi'ar in Uncanny X-men # 137.

Young Rachel grew up at Xavier's school for gifted youngsters and enjoyed a relatively joyful early childhood... that is, until the political climate took a turn for the worse and the school was attacked by anti-mutant troops. Rachel was taken prisoner and, when her telepathic powers manifested themselves, she was placed in a special project that made the following disturbing scene possible. 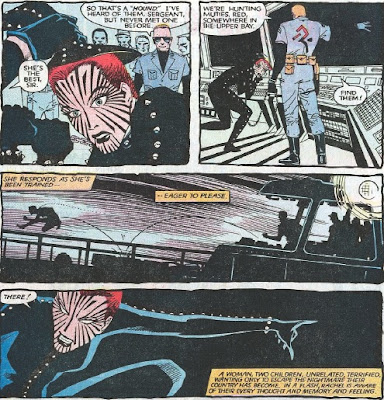 Rachel was subjected to intense mind altering drugs and hypnosis that did a real number on her mind and might possibly have made her more susceptible to other forms of mind control. It would certainly explain what was to follow...

She was forced to use her telepathy as one of the first Hounds, mutants enslaved by the government to hunt or kill their own. And, in true Claremontian style, it only made sense that a Hound would wear a costumed made of studded, black leather and a leash. Sigh.

Somehow overcoming her conditioning, Rachel reconnected with Kate Pryde and they went on one, final desperate mission together to infiltrate a military base in which a new, deadlier generation of Sentinel was being developed. And yet, even here she wasn't safe from mind control... 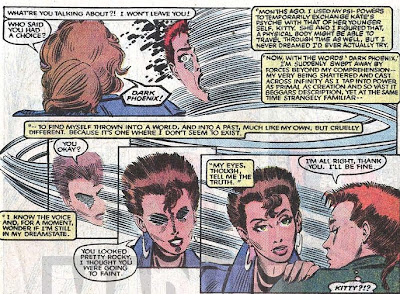 Kate Pryde had hypnotised Rachel, planting a hypnotic suggestion in her mind that would force her to push her powers to the limit and actually transport herself into the past... As seen in this rather realistic flashback from Uncanny X-men # 192.


Rachel actually arrived half a dozen issues earlier in issue #184, yet her first contact with the X-men of this era occured in New Mutants # 18, which showed a newly arrived and clearly malnourished Rachel returning home to Xavier's school, only to discover things aren't quite the way she remembers them... 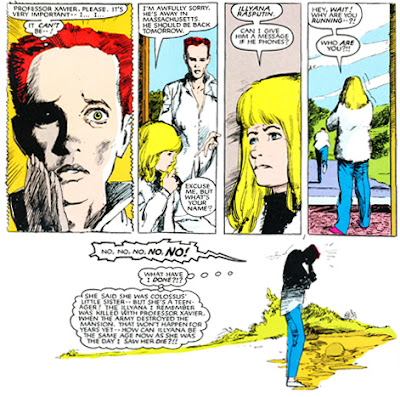 Mulling over this some more, Rachel returned to New York city in Uncanny X-men # 184, in which her  potent mutant energies caught the attention and appetite of the vampire Selene. She went after Rachel several times, trying to turn her into her heir or, failing that, lunch... 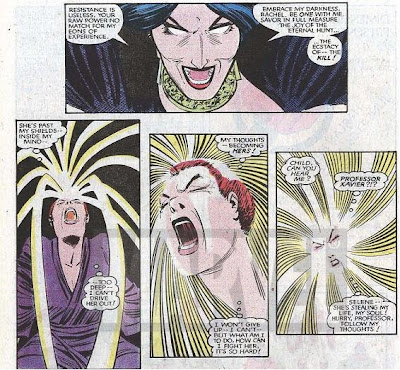 Selene had associated herself with the Inner Circle of the Hellfire Club by that time. She also had some interest in the New Mutants, particularly Magma and Moonstar, due to a shared history covered HERE.

So when Rachel and Magma happened to be on a field trip to New York in Uncanny X-men # 189, they talked it over and decided to enter the Hellfire Club and have a little revenge on Selene for all she put them through. Now, you just know the following was bound to happen: 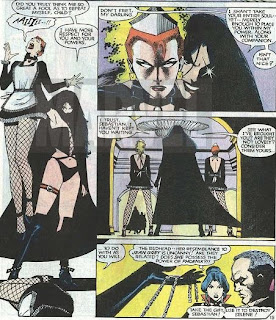 Still, take a little time to appreciate the subtle symbolism of this panel. Rachel and Amara had attempted to infiltrate the Hellfire Club by wearing servants' uniforms, complete with black fishnet stocking and a collar. Selene added insult to injury by having them leashed and presented as gifts to Sebastian Shaw, the leader of the Inner Circle.

All these encounters left Rachel pretty mad with Selene. So mad in fact, that she decided to have another go at killing her... This time taking a page out of the old mind control manual...
Uncanny X-men # 207 saw Rachel mind controlling Hellfire Club member Friedrich von Roehm. 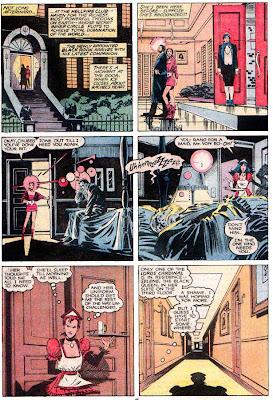 Mind controlling three people on one page? And managing to fit into another one of those skintight, raunchy-as-can-be French maid's uniforms? Ow Rachel, you truly got it all worked out. She managed to surprise Selene in her sleep and almost succeeded in killing her, if not for the timely intervention of fellow X-man Wolverine. Lets see how he persuaded her to stop... 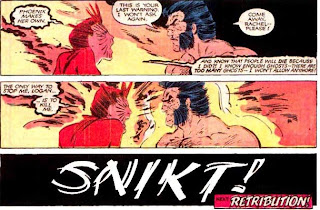 Rachel actually survived Wolvie's attempt to calm her down. She was hurt though, fleeing the Hellfire Club, using her telekinesis in a desperate attempt to keep her fatal wounds from opening up. Pursued by both the X-men and the Hellfire Club, she came across a weird manifestation in Central Park. 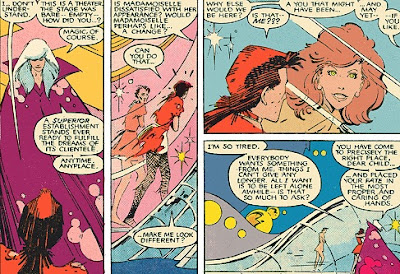 Rachel unknowingly entered the Body Shoppe, an interdimensional conduit into the Mojoverse, ran by none other than Mojo's flunky Spiral. She ever so gently managed to lure Rachel away from her worries... 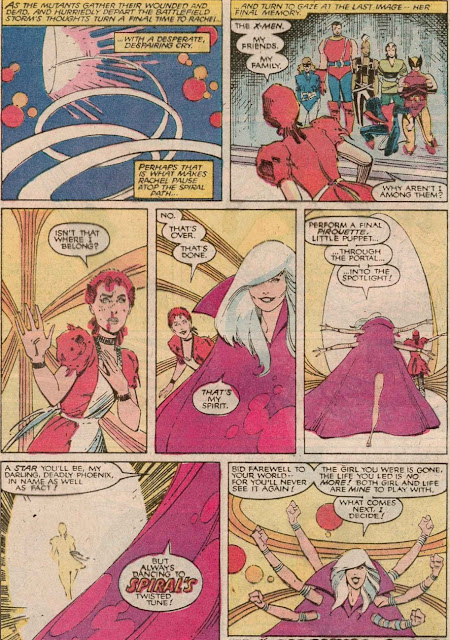 "The girl you were is gone, the life you led is no more! Both girl and life are mine to play with. What comes next, I decide!"

Well... not really, Spiral... Its actually Mojo who decides what happens next to Rachel. As we'll see in part two...

Posted by Clarmindcontrol at 12:42 AM