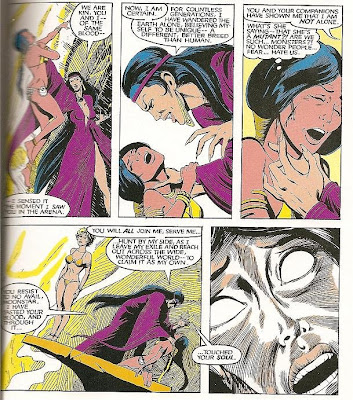 Selene is pretty much the quintessential Claremont villain. She hits on all the cliches people have been joking about for years now. She's an ancient, powerful goddess type figure who's used to being worshipped by slaves... Her dresscode is mainly black, leather outfits... and ow yes: she likes to control minds. She established her usual modus operandi during her first appearance in New Mutants # 11. The New Mutants had come to the hidden land of Nova Roma where Selene was posing as the seductive wife of one of Nova Roma's ruling senators. The immortal mutant Selene was actually the head priestess of a dark cult that worshipped death and celebrated human sacrifice.
Selene quickly developed an unhealthy obsession for Danielle Moonstar, better known as the illusion caster Mirage. She wanted to groom Danielle, looking to turn her into a being as dark as herself. Mirage and the New Mutants managed to escape, but Selene followed their trail back to New York.
There, she quickly adjusted to life in the new world by working her way into the Hellfire Club. The position of Black Queen was still vacant after the Jean Grey/Dark Phoenix debacle and it didn't take the superpowered Selene much effort to convince Sebastian Shaw to allow her a seat in the innercircle as the new Black Queen. And be fair, doesn't she just look ravishing in black leather?
Selene thrived in the Big Apple, randomly feasting on the lifeforce of bums and other lowlifes to restore her own life and beauty. But, always keeping an eye out for new subvertable talent, Selene soon noticed Rachel Grey-Summers. In Uncanny X-men 184, Selene first tried to claim Rachel... 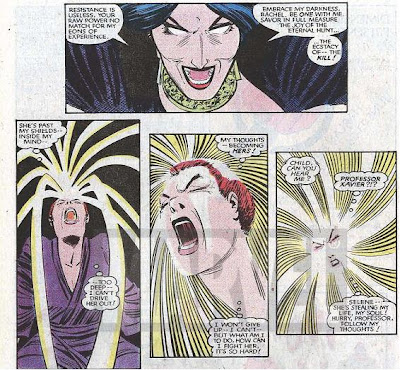 Rachel was able to drive the age-old vampire of thanks to the timely intervention of Professor Xavier. Of course, if at first you don't succeed... A few issues later (UX-189, for those of you keeping track) Selene gets a new chance to take over not only Rachel, but the New Mutant Amara "Magma" Acqueilla as well. They both wanted revenge and snuck into the Hellfire Club to get it. Things... didn't exactly work out (chains and a slavecollar, Claremont? seriously? why not just whip them a bit to make the fantasy complete?!) 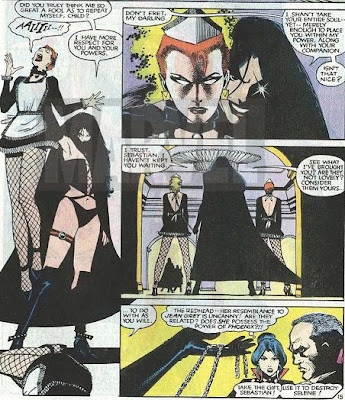 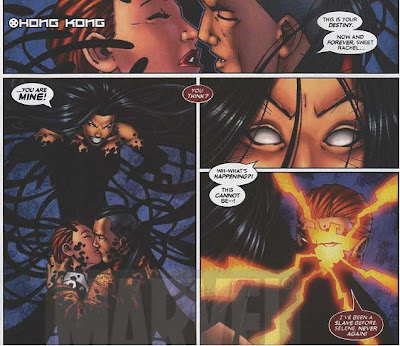 Posted by Clarmindcontrol at 7:35 PM