Phoenix, a chip off the old mind control block 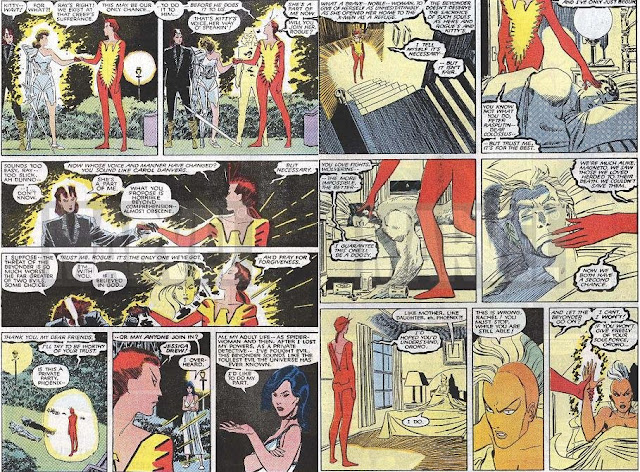 Ahh, the 1980s. A decade of change... But not for telepathic red heads in X-men comics written by Chris Claremont. And lets be fair... he wrote all of them.

Back in Uncanny X-men # 131,  Jean Grey mentally manipulated Kitty Pryde's parents into sending her to Xavier's school. Like mother, like daughter... in Uncanny X-men # 203, Rachel Grey, Jean's daughter from an alternate future time, tries to coerce the X-men to do her bidding as well.

Lets set the stage here. When it comes to early 80s Marvel crossovers, you just can't ignore The Beyonder. In 1984, he was introduced as the driving force behind the first company wide, massive crossover: Secret Wars. This 12 issue series was the biggest hit Marvel ever published, so it automatically merited a sequel.

The Beyonder, a supposedly all powerful being from a different dimension, came to this universe to learn more about humanity. This led him to visit all the different superhuman groups of the day in his quest for knowledge. Which, in turn, led to Secret Wars 2...

Much like a big child, the Beyonder quickly grew frustrated with his inability to grasp the intricate complexities of mankind. In one of his temper tantrums, he decided he wanted to die. His executioner was to be Rachel Grey... He granted her Phoenix-like powers (just like her mom) and basically dared her to confront and kill him. Rachel fell for his bait and decided to destroy the entire universe by breaching the M'Kraan Crystal.

But before confronting the Beyonder... Rachel decided she couldn't do it alone. She needed more power... She wanted the minds and souls of the X-men to fuel her as she fought the one from Beyond. Now, if you ask me, that's like trying to fight drought in the Sahara with 6 extra raindrops, but I'm sure Rachel had her reasons. Some of the team gave themselves willingly, some were sleeping and other like Storm protested heavily...

Nothing some mind control can't fix... The apple really doesn't fall very far, does it?
Posted by Clarmindcontrol at 11:20 PM