Diamonds are a man's best friend

In Uncanny X-men # 189, the Hyborean sorceror Kulan Gath was about to make a comeback.

Gath had been around to fight Conan the Barbarian. When his life seemed over, Gath used ancient magics to transfer his consciousness into a dark jewel of unspeakable evil. In recent times, the jewel came to New York City where a briefly revived Gath fought Spider-Man and Red Sonja (don't ask) in a very enjoyable Claremont/Byrne issue of Marvel Team Up.

Now, Gath was about to claim a new host: Jaime Rodriguez, an honest, hard working Puerto Rican sailor who dregged the jewel from the bottom of the New York harbour. Pretty soon, Gath started to work Rodriguez, tempting him to give into his dark desires.

But he was getting nowhere, until this happened: 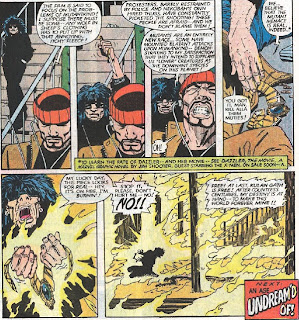 Gath quickly won over the already greedy crook and that led to all of Manhattan reverting into an Hyborean citystate ruled over by a revived Kulan Gath.

Sometimes, you just can't win...
Posted by Clarmindcontrol at 6:48 PM