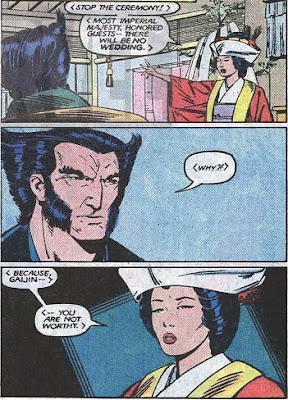 
Welcome to Uncanny X-men # 173, two issues before the big anniversary book and a tale filled with heartbreak for everyone's favourite claw-popping Canadian. After a romance that started when they met in Japan during Moses Magnum's attack, Wolverine and Lady Mariko Yashida had steadily been working towards their marriage.

Logan beat Mariko's father Lord Shingen in honourable combat back in the first Wolverine Limited Series and now the road was cleared for the two to tie the knot. Only, on the eve of the ceremony Mariko got... wait for it... mind controlled by Mastermind, who forced her to call off the ceremony and emotionally cripple Wolvie.


Heck of a wedding gift, guess the store must have been out of toasters or gravy boats.


Anyway, the cancelled wedding was part of Jason Wyngarde's big revenge scheme on the team. After the debacle with Dark Phoenix, he was rendered virtually insane but eventually got better. He began plotting his comeback by manipulating Cyclops into thinking his new bride Madelyne Pryor was actually the Phoenix. 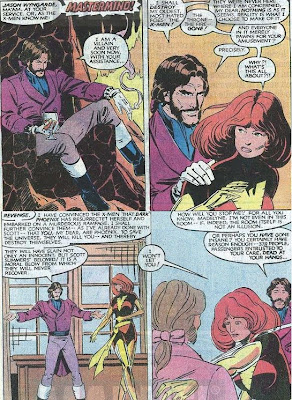 Then he convinced the X-men in issue 175 that Cyclops was actually the Phoenix, forcing Scott to fight the entire team to a standstill in a somewhat confusing but ultimately rather amusing romp.

Posted by Clarmindcontrol at 11:52 PM