When we last saw Rachel, she had just danced her way off the Spiral Path, straight into the Mojoverse.

After being used as Mojo's mindless, mind controlled puppet for heaven knows how long, Rachel finally returned to the 616 proper in the Claremont penned oneshot Excalibur: The sword is drawn. 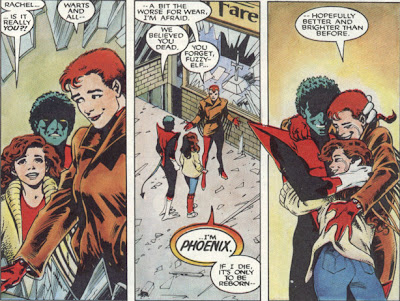 Rachel went on to join Excalibur, the UK based offshoot of the X-men, alongside Nightcrawler, Kitty Pryde and non-mutant members like Captain Britain and his girlfriend, the empathic omnimorph Megan.

Alas, even in this new book, Chris Claremont couldn't resist having Rachel subjected to mind control... The earliest case occured in the Inferno tie ins, in which Excalibur travelled to a demon infested New York city and Rachel, well... she went a little nuts: 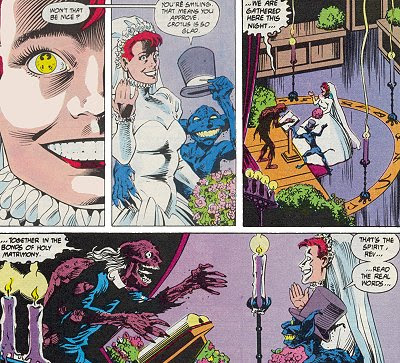 This particular image is worth an entry of its very own. The inherent power of the demonic Inferno, causes Rachel to freeze up, literally turning into a mindless mannequin... Making her easy prey for the demon Crotus who falls head over heels for the stiff stunner and decides they should get married.

As a member of Excalibur, Rachel experiences several remarkable adventures. In one of those, chronicled in the limited series X-men: True Friends, Rachel and Kitty are transported through time to face off against the Shadow King in 1930s Scotland.

The Shadow King you say? Guess who got herself mind controlled! 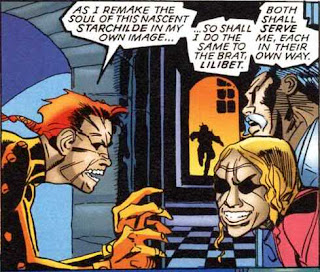 As if that wasn't enough, not long after that Excalibur embarks on the Cross-Time Caper, an extended adventure that takes the team to several alternate Earths across the Omniverse. On one of those, Rachel not only discovers that her mother Jean Grey is alive and well, she's also a part of the Inner Circle of the Hellfire Club ánd mind controlled by the Shadow King... 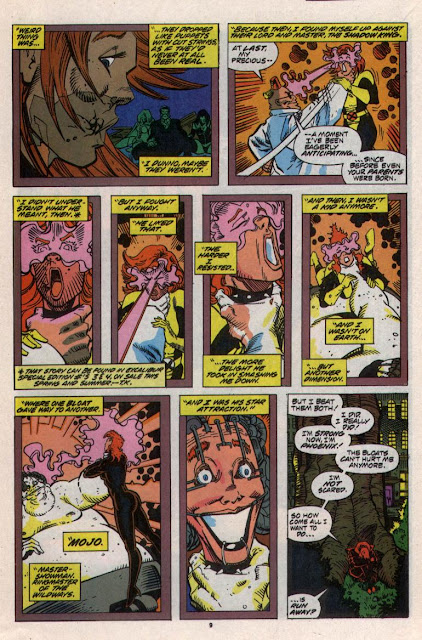 An interesting page, showing just how eager everyone seems to be to catch and control young Rachel. The Excalibur Special Editions mentioned in the captions never saw print by the way. The tale however did get published 9 years after the fact as the aforementioned True Friends limited series.

After Chris Claremont left Excalibur, Rachel went through a decade and a half of other writers who did whatever they could think of to her... Some of it made sense, most of it sadly didn´t. For an overview of the highs and lows, click HERE.

It wasn´t until 2003 that Claremont brought in Rachel, when he was writing X-treme X-men. Back then, the team was under assault by Elias Bogan, an obscenely powerful, long lived telepath with connections to the Hellfire Club but in *NO* way resembling the Shadow King *cough*copout*cough.

Bogan had somehow managed to mind control Rachel and used her as an attack dog against the X-men.

Mainly due to the efforts of Kitty Pryde, the X-men managed to free Rachel from Bogan's influence, though he had left his ebon mark on her, as shown in X-treme X-men 46... 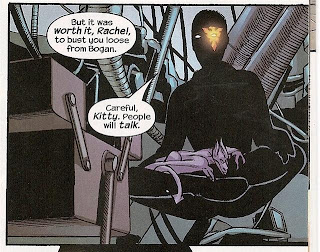 Rachel joined the rest of the X-treme team when they decided to return to New York and the other
X-men. That whole Bogan-caused blackness seemingly cleared up over night, because the next time she shows up in Uncanny X-men she gets herself a new uniform, a new haircut and a new codename: Marvel Girl, in honor of Jean Grey, her recently deceased mother from an alternate reality... You know, as one does.

Is that little nugget of backstory enough to make your head spin? Try this on for mind controlled size... 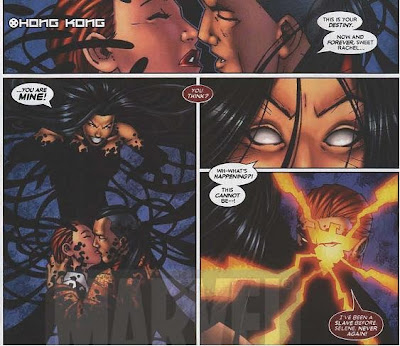 Uncanny X-men #454 saw the return of a new Hellfire Club and Selene attempting to sink her claws into Rachel once again. Still, that didn't quite work out for the raven haired vampire...

"I have been a slave before, Selene. Never again." 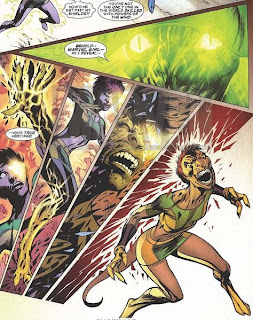 Yup, for those of you who love mind controlled women, but prefer them just a bit more primeval... its prehistoric dinosaur Rachel, better known as R'chel. She wasn't just transformed into a sentient dinosaur, she also found herself mind controlled as well... 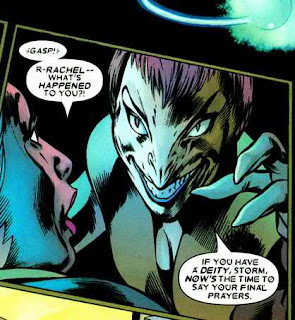 Now, I'm not saying the resemblance between dinosaur Rachel and 1950s Phyllis Diller is remarkable... but you have eyes, you tell me.

Soon after the conclusion of the Selene story, Chris Claremont's health took a turn for the worse and he was forced to abandon Uncanny X-men. But not before he was able to kick Rachel in the proverbial nuts one final time.

Rachel had been showing signs of tapping into the cosmic Phoenix Force again. This made the interstellar Shi'ar race rather uncomfortable, considering the last time one of the Grey family got a little Phoenix craving, all existence was about to die.

Therefore, once it became obvious that Rachel had access to the Force, the decision was made to exterminate her and, just to be sure, the entire Grey family. 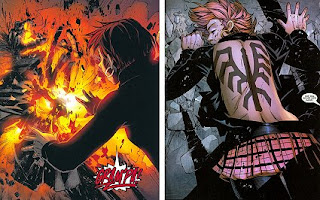 Claremont left the title shortly after the Shi'ar Death Commandos were done mass murdering Rachel's entire family... Chris left his character with a giant phoenix tattoo imprinted on her back, almost like a creator's watermark. Hard to ignore, yet even harder to work into your stories.

Chris Claremont made his mark on Rachel Grey-Summers... if only we were able to forget about as much as Rachel was allowed to...
Posted by Clarmindcontrol at 2:45 AM

This was an awesome article. Jean Grey is one of my favorite comic book heroines of all time, and I hate to admit I never knew she had a daughter.

Thanks for the informative, interesting back-story on Rachel.

You're very welcome :-) Just out of curiosity, how did you find this blog?