The previous entry dealt with the events of 1981's Avengers Annual # 10, in which Chris Claremont railed against the use of mind control by fellow writer David Michelinie.

Michelinie wrote Avengers # 200 which saw the superheroine Ms. Marvel get taken, mind controlled and impregnated by her captor Marcus Immortus. Claremont felt this course of action was very much like rape.

Claremont, through Ms. Marvel, gave the Avengers a stern talking to and accused them of (emotional) negligence. A point well made, something as traumatic as being enslaved and forced to perform unspeakable acts against your will isn't something you just gloss over.

Yet... its exactly what Chris Claremont did three years earlier in an issue of Marvel Team Up. In this story, Claremont pitted Spider-Man against his old foe Kraven the Hunter and his new pet... 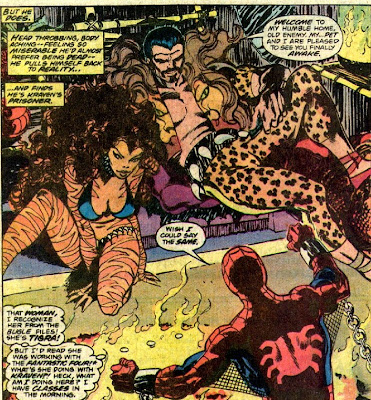 Gotta love that vintage John Byrne artwork. Yep, that's Tigra the Were Woman, captured by Kraven to be his mindless pet. Kraven had a bone to pick with Tigra because she had him arrested for murder. So, the master of jungle fever and skintight leopard pants swore revenge... He had taken her as his personal slave, plaything and attack dog. 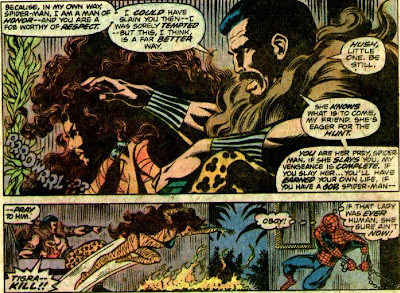 'Oboy!' is right, Spidey... De-humanising a woman, regressing her to the mere animal whose name she uses is debasing enough, but lets find out how Kraven managed to get her to comply...

Ah, why, thank you exposition heavy flashback... That clears it right up. Kraven forced a collar on Tigra that scrambled her higher brain functions, basically turning her into his mindless slave. In this state of mind, she would have been unable to defend herself from even the most vulgar of his whims.

Mind you, the word 'rape' is never used, but dialogue like "You will be my willing slave, cat-thing, forever" certainly hints at the fact that this goes far beyond your traditional, non-sexual, super villain revenge scheme.

Still, Spider-Man was a bit too busy to take all this into full consideration... Sometimes trying to stay alive takes precedence so I suppose that oversight can be overlooked. And hey, he *DID* figure out what made the lady so feral and unwelcoming. 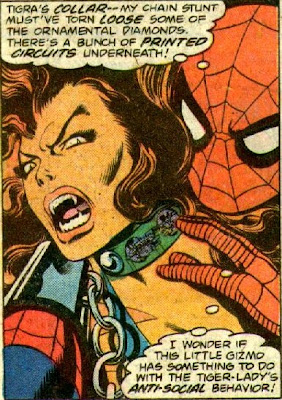 "I wonder if this little gizmo has something to do with the tiger-lady's anti-social behavior!" Nah, probably not, maybe she's just suffering from that certain 'curse' that comes once a month and gives you cramps and a bad mood. Sigh... Spider-Man broke the collar and set Tigra free. 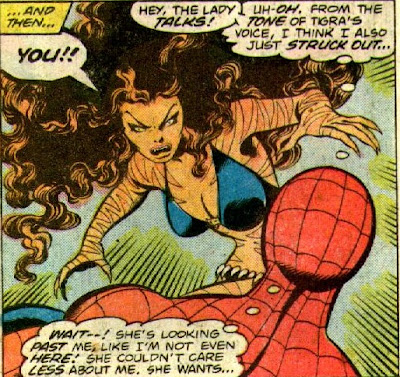 "She couldn't care less about me. She wants..."

Ow, yeah... way to make it about you, Spider-Man. You just freed a proud, strong woman from what must have seemed like an eternity of demeaning servitude to a man who made her do God knows what... And you automatically assume YOU are her first concern?

Tigra goes after Kraven in an attempt to get revenge and, preferably, her pound of flesh. But Kraven is a master of conquering animals, wild or otherwise, and soon gains the upper hand again...

No worries Greer, that's Spider-Man in the background there, coming to rescue you from a man with a lion face for a jacket... Don't you worry, little woman, Spidey will keep you safe from the bad man. And he did, actually. He knocked down Kraven and helped Tigra regain her senses a little. And then, this happened on the very last page.. 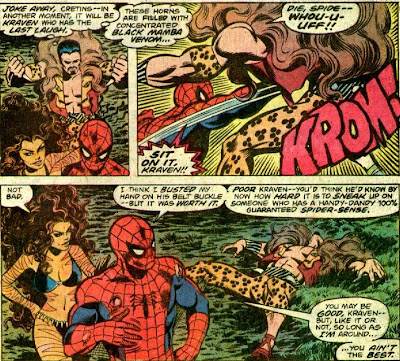 After all that humiliation she had to bear as Kraven's slave, after all the unvoiced trauma she most likely suffered through, Tigra had no part at all in defeating her tormentor.

As he lunges at them, Kraven gets knocked out by Spider-Man with a single punch. One could argue his spider-sense clued him in before Tigra even noticed Kraven coming at them, but don't forget Tigra has supremely enhanced senses as well.

In addition to that, she must have been intimately familiar with Kraven's scent after all that time in his presence, so there's no reason she couldn't have been the first to respond. At the very least, it would have gotten her a small measure of regained self respect.

Truth be told, while it would have made more sense storywise to have Tigra deliver the coup de grace, Marvel Team Up is still a Spider-Man book, so its half expected that the main star gets to save the day.

That's usually all well and good, but in this story it sticks out like a sore thumb, considering the message it sends:  After 22 pages, Tigra is still the assaulted, battered female who needs a man to stand up for her.

By comparison, this single issue of Marvel Team Up is worse than the entire Ms. Marvel storyline Chris Claremont took offense to over in Avengers.

At least Ms. Marvel managed to break free on her own and took the chance to protest and even defend herself... Whereas Tigra, well... she had to be rescued not once but twice in a single issue and wasn't even allowed to assist in helping to bring her bully down.
Posted by Clarmindcontrol at 12:00 AM