The thing about telepaths: once you have them on your team, its pretty much a given you'll end up mind controlled. Comes with the territory... And the X-men have always had what seems to be a busload of mind readers and thought benders... Heck, the team was founded by one.

Nowadays, he's the team's undisputed moral conscience. But in the early days, Charles Xavier didn't think twice about stopping someone from thinking twice... 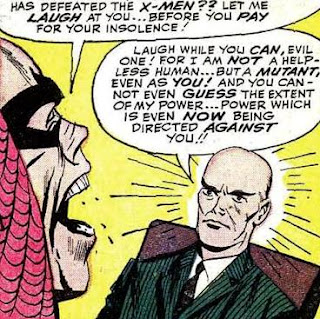 Charlie was king of the mind rape...From turning the Vanisher into a powerless amnesiac in
X-men # 2 to actually making Beast's parents forget they had a mutant son because Xavier figured it would be easier and less painful for everyone involved... All in a day's work.

Jean Grey must have been taking notes in class, because she used the old mind control trick too on occasion, for instance when she manipulated Kitty Pryde's parents. for instance.

Yet, of all the X-men's telepaths, Psylocke was the most conservative when it came to using her mental powers to control others. 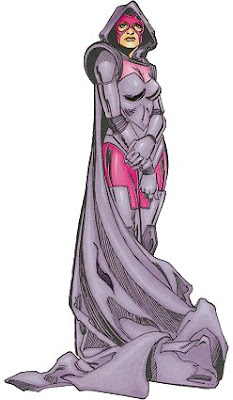 Which is a little odd, considering she was created by Chris Claremont. But, no worries, Uncanny X-men # 252 finally saw Betsy Braddock lose her mind control virginity when she forced all her fellow X-men to go kill themselves.

In the latter days of the X-men's stay in the Australian outback, the team was in rough shape after losing members left and right. Longshot had gone missing, Rogue was sucked into the Siege Perilous and vanished, Storm seemingly died and Wolverine was nowhere to be found either.

What's even worse: while they were away on a mission in the Savage Land, the Reavers had invaded the little desert town the X-men had been using as their base of operations. The criminal cyborgs planned a little ambush for their enemies.

Psylocke picked up on the Reavers' presence the second Gateway teleported them back home. Realising they were in no shape to take them on, Psylocke figured a self inflicted death would be preferable to being shot to bits by the approaching cyborg army. Of course, simply asking Gateway to teleport them to safety would have been an option too, but hey... who said this stuff has to make sense?

Betsy pulled out the Siege Perilous, a gem that's actually a portal to the afterlife. Wait, Roma will explain it... 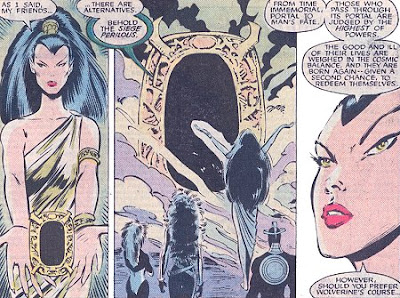 Prefering this kind of death, Betsy turned her psi powers into overdrive and made sure everyone on the team agreed with her that suicide really is quite painless. 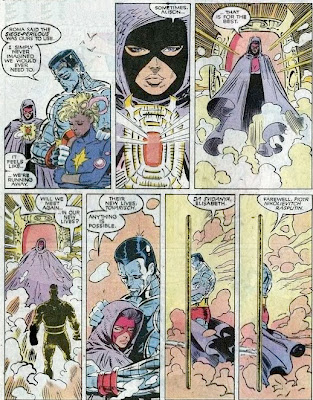 "It feels like we're running away" No, Dazzler, running away would be having Gateway teleport you away... You DO know he's sitting a few feet away from you, right? Anyways, Peter passes through the portal and Dazzler smells a rat.

With only Havok left to persuade, the following exchange is golden. 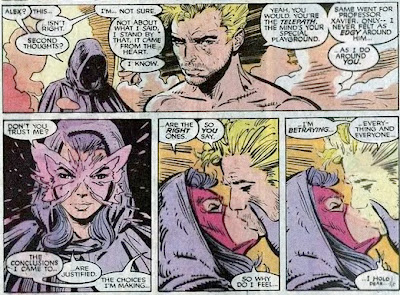 After Havok had passed on through, Psylocke awaited the approaching Reavers and said goodbye before entering the Siege herself. 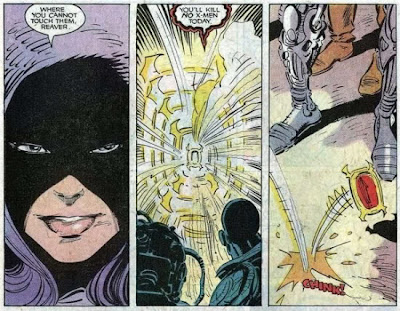 True, you singlehandedly beat them to it. So take a bow, Betsy Braddock, you have succeeded  where Magneto and a half a dozen superbaddies failed: you killed off all the X-men. You're now the team's worst enemy.

Accomplishing all that in only your first try at mind control? As far as first times go, that's like losing your virginity in a 12 body gang bang at a Tijuana donkey show.

Sidenote: did anyone else notice the CHINK! sound effect the Siege gem made in the previous panel? I'm sure that was just a totally random occurence and has absolutely no influence whatsoever on Betsy's reincarnated new form... 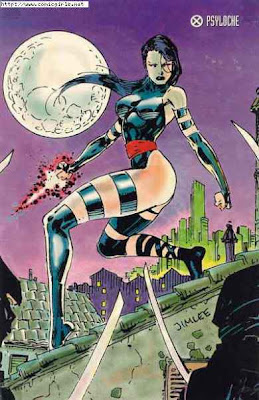 Posted by Clarmindcontrol at 8:49 AM

Betsy is at it again! And this time in her own family. Claremont might not be involved, but in Uncanny X-Force 23 this week, Psylocke controls Captain Britian, forcing him to kill their brother Jamie (it WAS to save the universe. And it worked. But JEEZ!)

Wow, you learn something new about the X-Men every other week. Damn Miss Braddock, get it gurl