Every writer has his or her own favorite characters, Chris Claremont is no exception to that rule. In the early days of Uncanny X-men, he worked on the evolution of Jean Grey (who ended up as Phoenix, who ended up mind controlled before she ended up dead)...

After Jean, his focus shifted towards Rogue, an identity stealing young girl who ended up sharing a mind with Ms. Marvel, another one of Chris's former favourites. Rogue also ended up dead, incidentally... before getting resurrected as an independent personality near the end of Claremont's original run.

But, surprisingly enough, Chris' most enduring character crush turned out to be someone nobody even paid notice to when she was first introduced wayyy back in Uncanny X-men 132 (1980).

I am, of course talking about Sage, better known to fans of 80s comics as Sebastian Shaw's assistant Tessa.

Say, who's Sage then?

Well, in true Claremontian tradition... a strong woman character with an even stronger adversion to any form of formal clothing. Black leather really is a way of life for most people in a Claremont comic.

Sage started out as the unnamed aid of Sebastian Shaw, the lord imperial of the Hellfire Club, one of the X-men's most dangerous enemies. She made her first appearance alongside the other members of the inner circle, in a non speaking role. 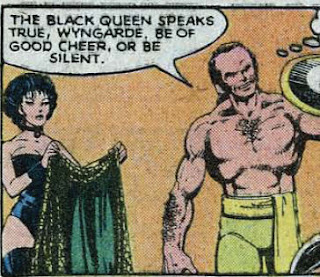 Who knew this almost invisible bit player would grow to become such a major character?

We only learn her name is Tessa, in her second appearance (Marvel Graphic Novel # 4). In that issue, we also find out she is far more than a mere servant.

Tessa is actually Shaw's most trusted aid, a mutant blessed with a computer-like mind, able to analyse and correlate tons of data and provide detailed analysis at the drop of a hat. Still, computers can be hacked. Call it a trojan, call it digital mind control, but it tends to happen a lot to Tessa. 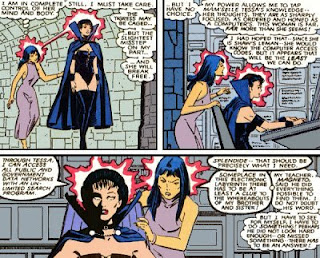 Chronologically speaking, one of the first cases of Tessa getting herself mind controlled was back in New Mutants # 53, when Karma invades the Hellfire Club looking for information on her missing family. Mind controlling a living computer to hack into an actual computer? That's a first.

Tessa remained a member of the inner circle for many years, until it was revealed by Claremont (when he returned to the X-books in 2000) that she had actually been an undercover agent working for Charles Xavier. The professor Charles had encountered Tessa  years ago while travelling in Afghanistan, during the same trip that made him cross paths with Storm, the Shadow King and Magneto.

She became his pupil, but rather than allowing Tessa to join the first X-men team, he forced her to work for one of the X-men's greatest enemies instead. Still, Charles did spend some time training Tessa, helping her focus her (limited) telepathic powers and ensuring her mind would be virtually impenetrable.

Essentially, this means she's immune to mind control or any other outside influence trying to gain dominance over her thoughts and actions. Yeah. Let's see how that went while she was under Chris' careful guidance... 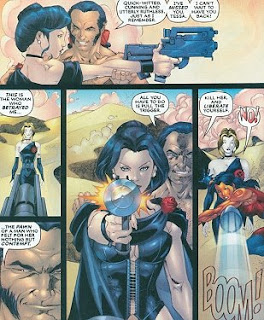 Here we have Tessa, who at that point prefered the codename Sage, trapped in one of Lady Mastermind's realistic illusions (X-treme X-men # 7-9). Mastermind had subtly tricked Sage into believing her version of reality over, well, actual reality.

'. Before long, Mastermind was hard at work at winning Sage over to her side, trying to make her destroy her mental bonds with the X-men and Xavier by actually killing them inside her own mind.

Posted by Clarmindcontrol at 6:07 PM