While returning to this blog after almost three years, I noticed an unfinished vintage post that had been lingering in the data buffer all that time.

Might as well polish it off and present a little tale of the 1970s, when Chris Claremont wrote the first ongoing Ms. Marvel series..

Carol Danvers developed as a strong female character under Chris' guidance, often juggling responsibilities as a superhero with her private life and her real job as editor of WOMAN magazine (yes, this was after all the 1970s, so Carol rode in on the fiery waves of the women's lib movement, making sure everyone could hear her roar).

Still, strong, independent females and Chris Claremont tend to be, well... an unfortunate combination.
Take a look at what happened in issue #23... 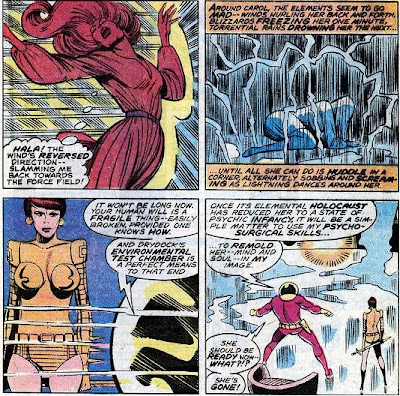 Ahhh, don't you just love the smell of male domination in the morning?

The Mysterio-lookalike, in case you were wondering, is known as the Faceless One. This one-off baddy is an alien, hellbent on destruction, conquest and all that other good, fun stuff maniacal menaces are in to.

Still, despite all his grandiose claims, Marvel breaks free of the Faceless One's control and strikes back... 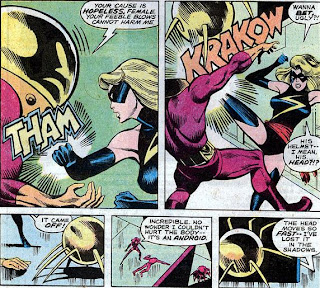 So, yeah... not only does the bad guy not have a face, he turns out to be bodiless as well. Yes people, Carol got mentally enslaved by little more than a disembodied head.

Needless to say, so weird and unbelievable a villain like the Faceless One would never be seen again. Surely, the notion that a mere floating head is enough to conquer the lead character of your book is utterly ridiculous and... 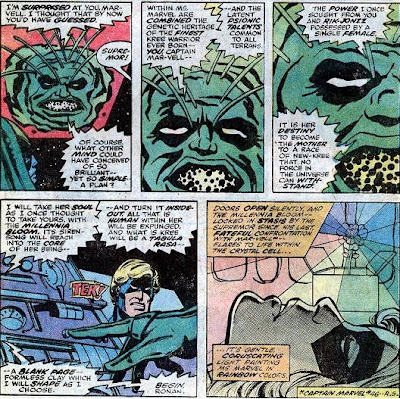 Yeah... There was that other time the Kree Supreme Intelligence and that other big floating head thingie MODOK teamed up to turn Carol into a slave.

Well, in Chris' defence, he worked out his obsession with big giant male heads dominating womenfolk when the 80s dawned.

I guess thát's something, at least...
Posted by Clarmindcontrol at 12:23 AM