Remember when the X-men lived in San Francisco for the first time?
The city by the bay has been the team's official stomping grounds for over four years now, but its not the first the mutants called 'Frisco their home.

Back in the mid 80s, the team spent a few issues in San Francisco, crashing at
Jessica Drew's place at Yarbro Court. In those days, Jessica had recently lost her Spider-Woman powers and was making a go of it as a private detective. But not even her sleuth skills could have deduced what horror the X-men had to face in Uncanny X-men # 206. 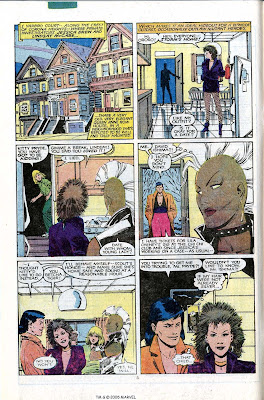 And no, that horror isn't Jessica's boyfriend David Ishima taking out a not-even-close-to-16-year-old on a date.

Enjoying a quiet evening at home, the team is suddenly under attack from Freedom Force, a government sponsored team of superbeings, consisting of former member of the Brotherhood of Evil Mutants (Blob, Pyro, Avalanche) and some fresh faces, the second Spider-Woman and... Spiral.

Their reason for showing up unannounced? Spiral will tell you herself.

This multi limbed refugee from Mojoworld alone proved to be almost too much for the team, as her powerset of teleportation and all purpose magic made short work of Rachel Summers, the heir to the mantle of the Phoenix and arguably the team's most powerful member. And ow yeah, she's also capable of teleporting others... 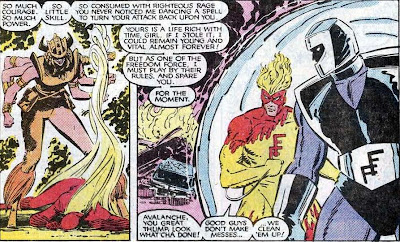 With Pyro and Avalanche joining the fray, Rogue decided to take out Spiral in order to make sure there wouldn't be any more reinforcements. Rogue being Rogue, she decided the best approach was to touch Spiral, absorbing her powers and identity and knocking her out. 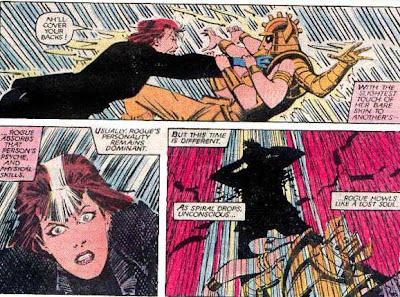 A solid enough idea, but unfortunately Spiral is an otherdimensional sorceress, used to having her identity twisted and altered by every single reality she dances through. Compared to that, Rogue's absorption attempt was easily warded off... With a little twist no one saw coming.

Spiral's personality proved more dominant than Rogue's own mind, so her mind was taken over but she quickly made Rogue's body her own and even growing her four extra limbs. Too bad she couldn't do anything about the skunky hairdo, tho.

Spiral in control of the super powered Rogue... Wonder how that turned out for the X-men.

Spirogue turned the tide for Freedom Force, knocking out Colossus and helping the others corner Storm and Kitty Pryde. Spiral was so pleased with her new form, she decided to 'pull a Carol Danvers', and touch Spiral long enough for the transfer to become permanent. 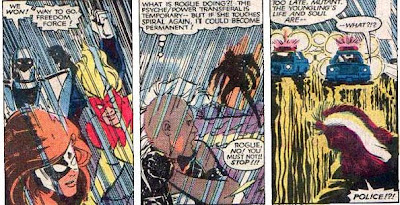 So. Lets recap here... Spiral, a slightly deranged teleporting sorceress from another dimension is presented with the opportunity to vastly increase her personal power and all it takes to stop her from grabbing this golden opportunity with all six of her hands is an emotional plea from Storm and... the police?

... Tiny, insignificant creatures she could teleport away with the blink of an eye are reason enough to make her stand down? Guess Chris didn't have enough space left to bring the story to its logical conclusion, not unlike this blog :-)
Posted by Clarmindcontrol at 10:33 PM