Team America: Give me your tired, your poor, your Marauder waiting to break free

Now, I do realise that I've been harping on Chris Claremont and his overuse of mind control as a lazy plotdevice in his stories for quite some now.

But lets not forget Chris is hardly the only writer to use the mind warp as a technique to tell a story. Hell, some creators  even base an entire series around it.... 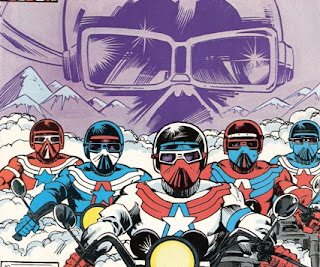 Not only did Team America risk their lives performing dangerous stunts, they also had an ulterior motive for being together. Read on then... 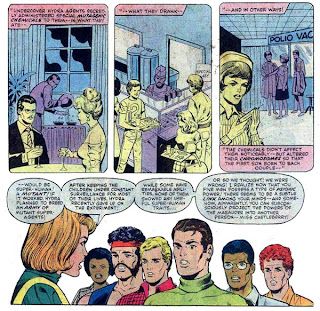 Yes, Team America appears as shocked as the lady Hydra scientist who explains their condition. And who can blame them? As far as origin stories go, this one's a doozy. Their mothers were all unwittingly part of a HYDRA experiment that was supposed to create mutant children. In order to mutate their offspring, the women were injected with mutagenic agents (read: radiation). I've heard that pregnant women have a certain glow about them, but that's just ridiculous.

And also not very effective. Because yes, they did develop superhuman powers, but they only work when all five of them are together. When they join together, their powers combine into 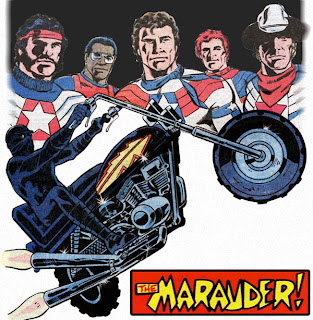 Yes, that's right... five people combine their mind to take over another person, really any old innocent bystander will do. The personality and body of the horst is transformed into that of "the Marauder", a daring black clad stunt cyclist with a spiffy bike. Think Ghost Rider without the blazing skulls, or Captain Planet with less eco friendly messages and more pointless driving around on gas guzzling road hogs.

Team America seemed relegated to life as a one off, until Chris Claremont brought them into New Mutants. Now, I would recap the issue, if only Wikipedia hadn't done so sublime a job already: The team temporarily disbanded but yet another attack drew them out of retirement. While performing at a charity exhibition, Team America intervened in an attack on The New Mutants by Viper and the Silver Samuari.

They manifested the Marauder on Danielle Moonstar and the 16 year old Cheyenne girl, in touch with nature's serene spirits, suddenly did this: 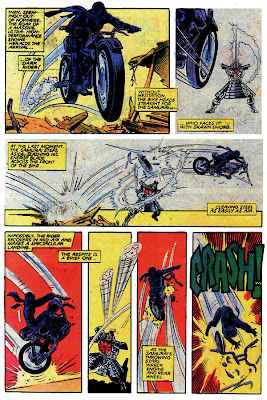 Well, its the thought that counts.

Dani was captured and Viper tried to force Team America to steal for her. Before they could formulate a plan of action, professor Xavier showed up and taught the motor team a thing or two about controlling minds. Whether they wanted to or not. 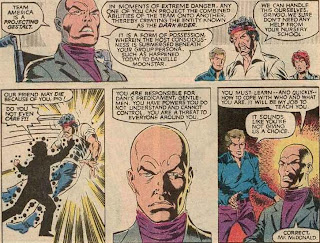 And that's today's lesson, kids: there's always someone better at mind control then you... Even if his set of wheels barely have one horse power.
Posted by Clarmindcontrol at 4:51 PM