What made Chris Claremont's take on New Mutants so interesting, was the same thing that made Uncanny X-men a must read: soapy elements along with the spandex superheroics we all know and love.

Despite this similar approach, to his credit, the book never felt like Uncanny-lite. Claremont quickly found and mastered a distinct tone for New Mutants. He focussed on what its like to be a teenager with mutant powers in the early 80s. 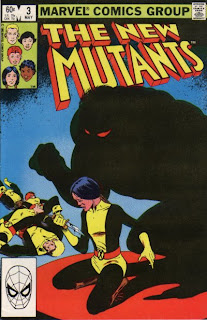 And, judging from the cover to issue # 3, it wasn't exactly as much fun as you'd expect.

Add to that Claremont's tendency to get a little preachy. Especially early on, when every other issue felt like a  heavy handed morality play. Child abuse, domestic violence, stalkers, fear of not measuring up or being shunned by your peers, you name it, Claremont wrote about it...

Usually in such a sincere, but hamfisted way, one still has to resist the urge to yell "Tonight, on a *VERY* special Blossom" after every other panel.

New Mutants ran the risk of becoming the Public Service Announcement of comics, especially during the team's adventure in Nova Roma, a long lost city hidden deep within the Amazon. The citizens of Nova Roma were descendants of ancient Romans and still honoured their traditions. This meant gladiator fights,  brutal bloodsports in the city's coloseum.

The female New Mutants were kept out of the fighting, but Cannonball and Sunspot were forced to compete. 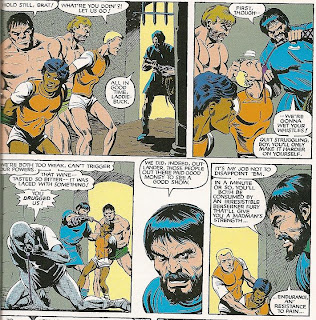 And its not like the girls were much better off.

Yes, lets give wine to Dani and Rahne, who are supposed to be 16 and 14. Such totally appropriate behaviour. Lets see how the wine influences them... 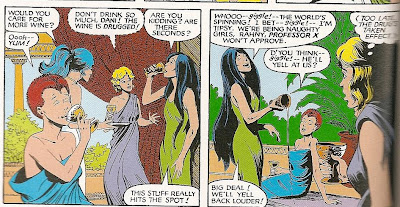 The facial expressions artist Sal Buscema came up with are priceless. Two sips and Dani's already a drunken lush who has a 'spot' that needs hitting with a second helping of wine.

And shy, ultra religious and repressed Rahne Sinclair is another drink away from posing for a Playboy photoshoot while falling out of her toga.

Sidenote: isn't it interesting how the boys and girls react differently to the same drugged wine? Sam and Roberto's drinking turns them into irrational, violent thugs... while Rahne and Dani turn into giggling, playful self proclaimed 'naughty girls' who don't care about anything else but having fun.

Kind of sends a message, doesn't it?

"Too late, the drugs have taken effect."?

Posted by Clarmindcontrol at 3:44 AM