As we established previously, Chris Claremont has a certain appreciation for Doctor Strange.

By the time Marvel Fanfare rolled along in 1982, he got his chance to write the master of the mystic arts once more. This time, Claremont was paired up with the massively talented Paul Smith who would later join him on a short but memorable Uncanny X-men run.

Chris'  Strange tale appeared in Marvel Fanfare # 5 and featured a plethora of mind tampering and control. It all started with a little girl showing up at the doctor's sanctum sanctorum. 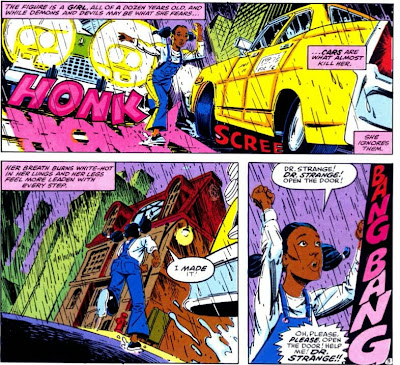 Leaving aside the obvious question how a little girl knows about the elusive sorceror supreme, let alone his place of residence... having a child show up at your door at four in the morning and entering like this is cause for concern.

A quick examination of the girl shows she's been drained of her magic potential, leaving her soul vulnerable to mind control.

Strange decides to search the astral plane for the girl's mysterious assailant, but his apprentice/lover Clea already has a pretty good idea who it is... The villain to beat is, well, he just told you who he is.

Nicodemus is a technomage that uses both science and sorcery to increase his somewhat limited magical powers. And who better to drain then Earth's master magician?

He robbed the little girl of her soul, in essence mind controlling her to enter Strange's home like a trojan horse. Once safely inside, a post hypnotic suggestion kicks in that forces the entranced girl to give Nicodemus entrance to the sanctorum. 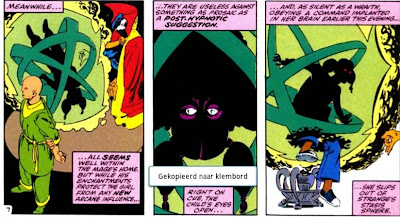 And this is where the masterplan really kicks in... This rather ingenious move allows Necrodemus to surprise Strange and drain about half of his mystic might. 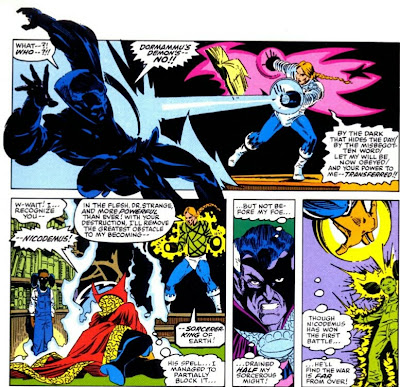 Have no fear true believer, this was back in the early 80s, before Watchmen, Dark Knight or all that other grim 'n gritty stuff Frank Miller did.. So, it was before good guys blasted innocent children... Well, not without a very good reason at least.

Watch what happens when Clea finally gets home and finds herself in deep doodah...

So, Strange forces himself upon an already traumatised young girl, taking over her body and playing it like a puppet just to deliver a message?

Talk about taking ''the doctor is in...' too literally.

Posted by Clarmindcontrol at 12:47 AM