Even dead X-men get mindcontrolled

By his own admission, Chris Claremont has very little interest in writing comics these days.

Whether or not this is a positive development is open for debate, but judging from today's entry, the two part mini series Chaos War: X-men, taking a break might actually be for the best. 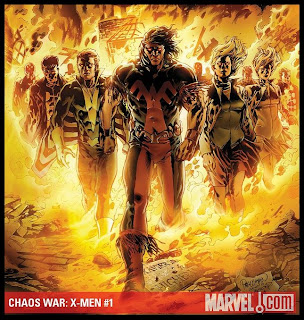 As it turns out, Claremont's participation in the early 2011 company wide crossover Chaos War was actually his last Marvel work to date. He co-wrote it with another 80s comics icon: Louise Simonson,  long time editor of Uncanny X-men and writer of New Mutants and X-Force.

Their Chaos War tie-in actually didn't really tie in to the main storyline. In fact, the main villain, Japanese god of evil Amatsu-Mikaboshi, made a grand total of zero appearances. Instead, Claremont and Simonson focussed on several deceased X-men that had come back to life for reasons they themselves barely understood.

This resulted in an uneven, choppy story full of hazy events that were hard to follow despite the overwrought captioning... A tale that tried so hard to be atmospheric and dreamlike, it made itself absolutely irrelevant because of it. But oh my, did it feature mind control!

Barely four pages into the first issue, as lead characters like John 'Thunderbird' Proudstar, Banshee, Multiple Man and Moira McTaggert are trying to figure out what the heck is going on, the malevolent Stepford Cuckoo Esme forces their minds together so its 'easier to compare notes'.

Esme really is a bit of a handful, her fellow Stepford sister Sophie constantly complains about Esme's behavior and alledged superior power. Still, all the telepathic power in the world doesn't save her from the villain of the book: 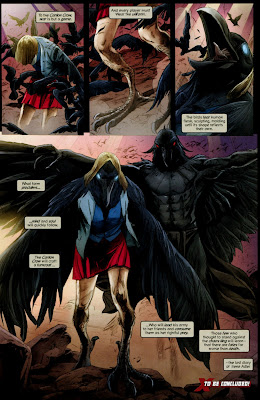 Forget Amatsu-Mikaboshi, who needs a god of evil when you can fight Carrion Crow, a mind controlling, flesh warping bad guy who is chasing the group of recently resurrected dead X-men and it all involves one of Destiny's lost diaries.

Okay, enough is enough... This two parter is a convoluted mess, check out Wikipedia's brave attempt to make sense of it all:

During the Chaos War, Moira MacTaggart, Thunderbird, Banshee, Esme and Sophie of the Stepford Cuckoos, and Multiple Man's fallen clones are resurrected and appear on the former grounds of the X-Men school. There, Moira MacTaggart finds one of Destiny's diaries which contains a passage depicting the events of the war and apparently the key to defeating Amatsu-Mikaboshi.

After Thunderbird prayed to the Thunderbird God to teleport the group away from the attacking Carrion Crow, Thunderbird and the group learned that Moira has been possessed by Destiny's ghost.

Yeahhh... And that was just the first issue.

Issue two had Carrion Crow and the transformed Cuckoo pick off the dead X-men one by one... Starting with her own sister Sophie. 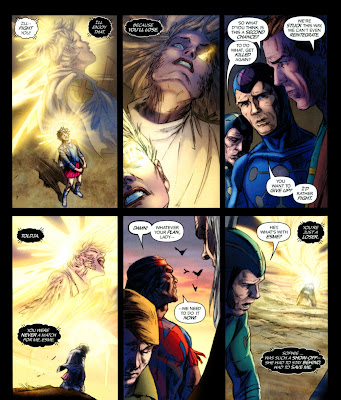 This went on for a good half of the issue until Thunderbird suddenly developed near mystical powers connected to the actual mythological thunderbird... Who is somewhat related to the Phoenix Force, but not quite, and... Ah well, there's more mind control: 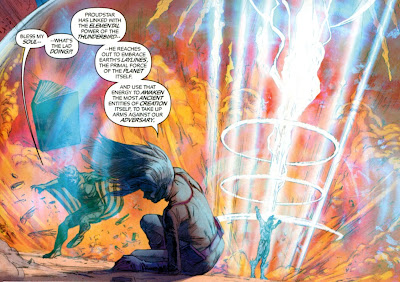 Yup... Thunderbird, a man who died after only three appearances in an X-men comic in the late 70s... A man whose main characteristics were anger issues and the fact that his mutant abilities of enhanced strength, speed and senses made him little more than a bargain basement Wolverine... minus the claws... That man returns from the dead as a conduit for a previously unheard of primal force of the Earth? 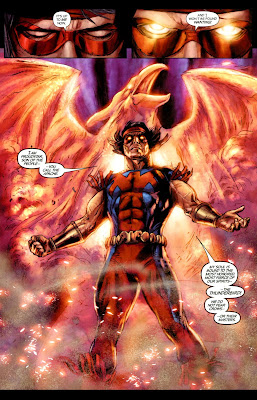 Chris Claremont may be done with writing comics, but... As far as swansongs go, Chaos War: X-men  isn't something to look back on with pride.

This mini series had its many many bad points....But I loved how Claremont handled Proudstar's magical abilities.....again you are ignoring the point that Claremont gave John character and improved the character considering he wasnt a well developed character because he was meant to die....

I'm afraid I don't quite agree with you on the point that Claremont 'improved' Proudstar's character.

The Proudstar we see in the Chaos War mini is so completely removed from anything previously established about him or his family, it might as well have been a completely new character.

My point is: character growth doesn't occur in a vacuum.