Being an X-man in the early 2000s didn't just meant you had to fight for a world that hates and fears you. There was also a good deal of 'leading by example' involved, after Xavier was outed as a mutant on live TV and his school for gifted youngsters was flooded with teen mutants eager to learn from the famed mutant heroes.

Grant Morrison introduced these concepts during his New X-men run and was the one who got to play around with them mostly. But Chris Claremont also got his two cents in when he was writing X-treme X-men. He had Sage and Bishop visit the Xavier institute to solve a murder, a visit in which the two of them got mind controlled by some rascally freshmen.

You'd think that such an act of total insubordination would result in a complete and utter crackdown from the teaching staff. The first issue of the two part X-treme X-men: X-pose miniseries shows quite the opposite is true... 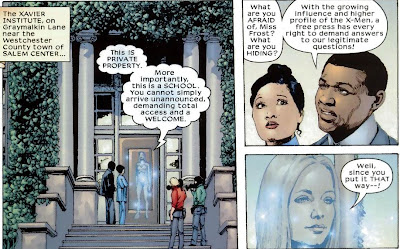 X-treme X-men: X-pose (try saying that ten times fast) focussed on a pretty forgettable plot idea, best summed up by Wikipedia's clunky description: "The team deal with the public relations aspect of what they do. The team attempts to keep a mutant documentary on the air, despite efforts to kill it because it is not derogatory."

So, when reporters show up to do their job, Emma decides its the perfect time for a little lesson in ethics and restriction. Ow, who are we kidding here?

"Indulge yourself, child. Run them through your MAZE."

Instead of actually trying to better the already strained relation between humans and mutants, Emma Frost allows untrained Stepford Cuckoo Esme to use a little mind control.

Needless to say, all objectivity in their stories drowned along with them. Great job, Frost!