Meet Pretty Boy... a likeable, if not handsome guy. Why is that lady running away from him? Well, here goes... a post on Pretty Boy, maybe the ultimate of mind control goons, a cyborg capable of controlling minds, making his victims love what he does to them and looking positively hot while raping them. He'll make you like it, cos he's just that good.

Pretty Boy was introduced in Uncanny X-men # 228, as a member of the Reavers, a band of marauding cyborg thugs who used the mutant known only as Gateway to teleport them from their base in the Australian desert to wherever they had planned their next heist. And they weren't exactly subtle about it either... 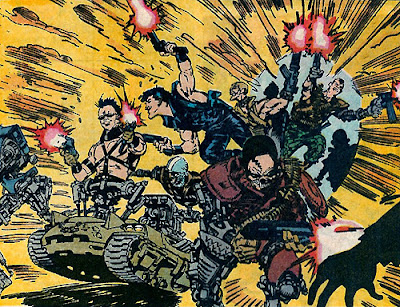 But while most of his fellow Reavers were little more than cybernetically augmented humans with big guns, Pretty Boy possessed a few additional powers.

His foremost ability was to rewrite people's brains using filaments that shot forth from his eyes. He first used this power when he kidnapped banker Jessan Hoan, a gifted financial expert. The Reavers needed someone like her to make sure all the loot they recovered from their raids was put to good use. Jessan wasn't too eager to assist them, but that didn't stop Pretty Boy. 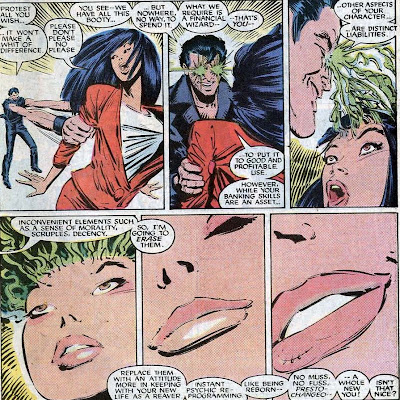 Marc Silvestri's art answers that question, Jessan is enjoying the sensation of being violated and reshaped into the person her assailant wants her to be. And Pretty Boy would have gotten away with it too, if not for the X-men who happened to pick this moment to attack the Reavers in their desert town. 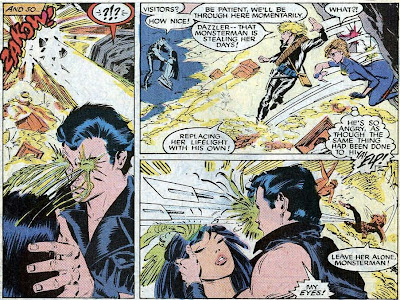 Longshot's throwing knives cut off Pretty Boy's mind control tendrils (or, his eyes) causing him to be pretty miffed at the two X-men. He even tried to recruit Dazzler into the Reavers using the same trick, but her eyes proved to be just as dangerous... 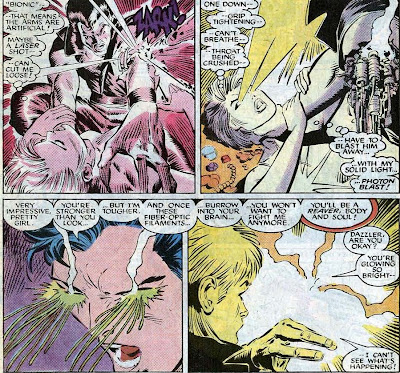 "And once these fiber-optic filaments... burrow into your brain... you won't want to fight me anymore. You'll be a Reaver, body and soul!"

As it turns out, the place he was going first was Gateway's teleporation gate. The X-men defeated the Reavers and took over their desert base, but Pretty Boy, Skullbuster and Bonebreaker managed to escape. They hooked up with Donald Pierce, former Hellfire Club member and cyborg in his own right to form a new incarnation of the Reavers.

They were later joined by Lady Deathstrike and Cole, Reese and Macon, three former Hellfire Club soldiers who were cybernetically enhanced as well. These Reavers managed to drive the X-men out, relishing in their victory and destroying the team's personal belongings out of pure spite. Here's Pretty Boy hacking away at stuff in Wolverine's quarters... 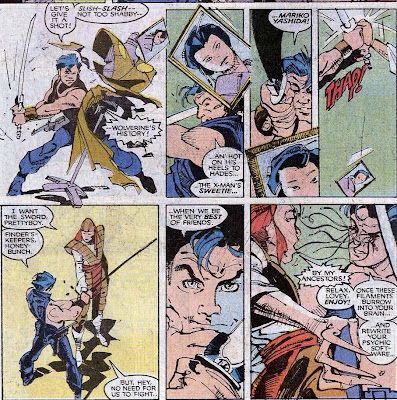 In a nice bit of characterisation, Claremont has Lady Deathstrike step in to prevent Pretty Boy from further defiling the blade of the Yashida family. Sure, she may be criminally insane and obsessed with killing Wolverine, but Yuriko still knows more about honouring and respecting a great house like the Yashida's than a hick like Pretty Boy ever could. Not that it stopped him from trying to get what he wanted, the only way he knew how... 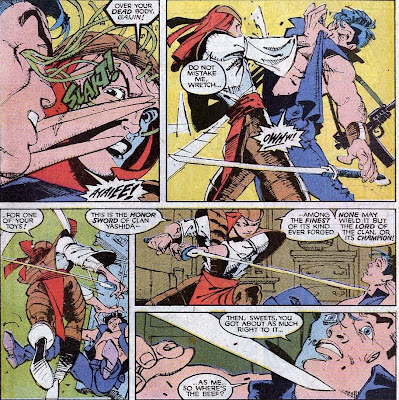 Pretty Boy's fortright, even arrogant demeanor cost him dearly. Pierce got fed up with his constant lip and after Pretty was damaged during a confrontation with Wolverine and Jubilee, the Donald decided to play a cruel trick when he rebuilt his frame. 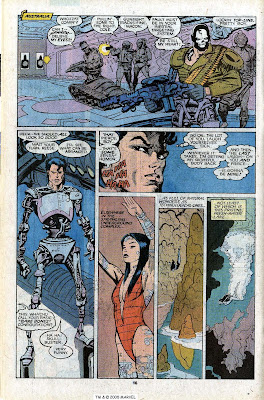 Still, his mostly robotic body didn't make him any less of a threat, quite the opposite. A fact Polaris discovered when the Reavers attacked Muir Island in Uncanny X-men # 255. 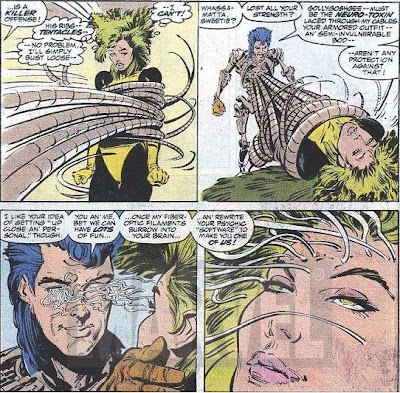 This time, it was the Banshee's wail that cut Pretty Boy's fiber optic mind control filaments. Pretty Boy didn't get to control any more people during Claremont's initial run on the X-books. And soon after Chris left, he was presumed to have died along with most of the Reavers during a Sentinel attack by future villain Trevor Fitzroy.

Luckily, you can't keep a good cyborg down... So by the time X-treme X-men Annual 2001 came along, Chris Claremont was back and so was Pretty Boy. As usual, both were up to no good... 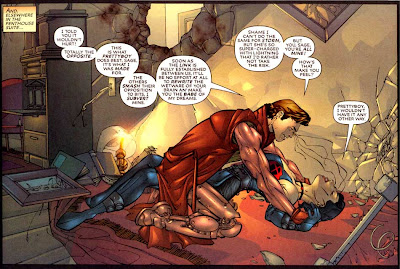 Ahh, just look at those sensual, seductive and even downright pornorific poses Pretty Boy and his victim Sage are in. He is all ready to use his powers to scramble her computerlike brain and turn the X-men's mentat against them. And with no one to interrupt the process, how'd it turn out? 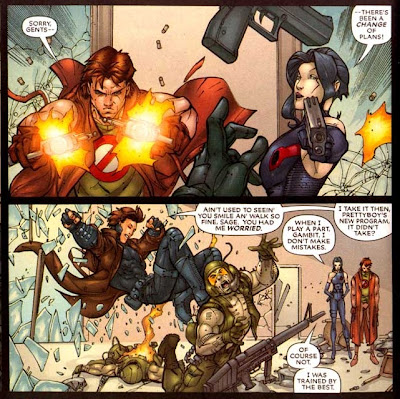 "I take it then, Pretty Boy's new program didn't take?"

Sage's computer mind proved to be the stronger mental CPU, easily overriding Pretty Boy's cybernetic commands and even using them to take control of him to boot. Considering that annual is the last time Chris Claremont ever wrote the character, one can only applaud the irony of Pretty Boy's story arc.

For close to 15 years, every single attempt to mind control people gets thwarted... And the minute he does succeed and has his (s)way, it backfires... Because he's actually the weaker party in the mind control.

Such delicious irony. One might even say pretty... boy.

Posted by Clarmindcontrol at 2:16 AM

I always thought that Claremont was going to follow through on Dazzler being "converted" based on some dialog from X-men 228. I guess that was another lost plot.(oops sorry different blog-LOL)

If I had fiber optics coming out my eyes, I wouldn't exactly wave them around a light-show like Dazzler--if anything, they'd just funnel the blinding radiance up the optic nerve even faster, right?