Anyone remember when the Micronauts were big? 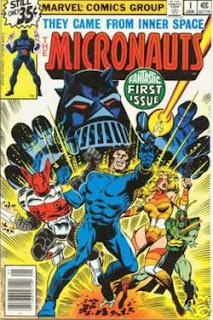 Back in 1979, Marvel acquired the publishing rights to The Micronauts a popular line of children's toys. Writer Bill Mantlo took to the book like a duck to water, telling tons of tales about this band of miniature warriors and their main nemesis, the equally tiny Baron Karza.

The comic could use a little sales boost tho, so in 1982, Mantlo sat down with X-men scribe Chris Claremont to pen a team up book. The result is today's entry: X-men & Micronauts, a four part limited series filled to the brim with wretched dialogue, clunky art, cringe worthy scenes and downright creepy moments thanks to, what else, mind control.

This titanic tale starts in the Microverse, where the Micronauts have been fighting a new and mysterious new foe who is so powerful he can destroy entire civilizations without working up a sweat. 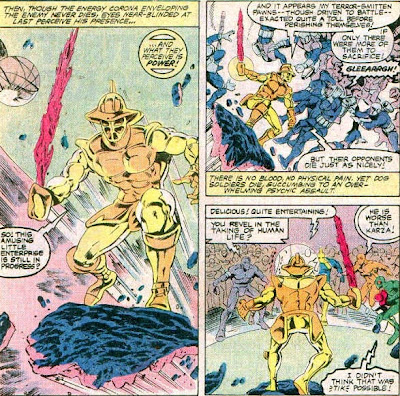 Desperate to stop this menace, the team has even been forced to team up with Baron Karza... While the Micronauts try to keep this villain at bay, Karza goes off on his own to discover just where this threat originated from.

Of course, that'll take a while, so lets check in with the X-men. Charles Xavier is busy training the New Mutants in the Danger Room. But he's a little distracted... 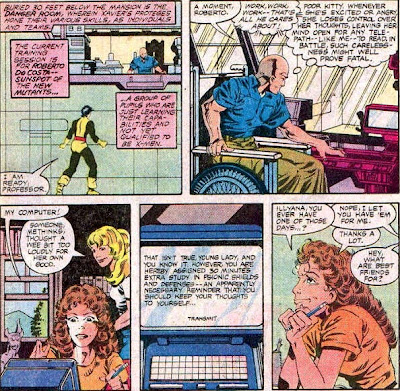 "Poor Kitty, whenever she's excited or angry, she loses control over her thoughts, leaving her mind open for any telepath... like me... to read, in battle such carelessness might well prove fatal."


How would you like a teacher that blatantly reads your thoughts and then berates you for being able to do that. Also, you got to love that early 80s text messaging. Or wonder why Xavier wouldn't use his telepathy to tell his pupil her psionic shields aren't up to snuff. Ah well... Time to get back to the story.

Karza has been busy tracing the enemy's power to the source and... pops out in the Danger Room. 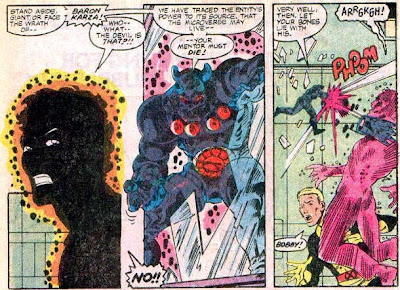 Yup, for some reason the baddie stems from Xavier's school for gifted youngsters. A furious fight ensues as both the X-men and the New Mutants try to subdue their foe. But Karza isn't too impressed by their show of force, until Kitty inadvertently bumps into him and partially phases inside his armour. 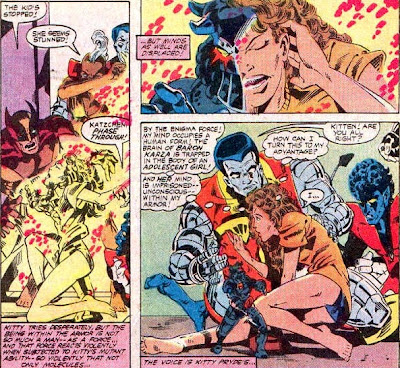 "By the Enigma force! My mind occupies a human form! The brain of Baron Karza is trapped in the body of an adolescent girl! And her mind is imprisoned... Unconscious... within my armor! How can I turn this to my advantage?"

So, Karza is stuck in Kitty's head while she's trapped inside his armor. As an unexpected bonus, Karza can still control his body through Kitty, so the X-men don't know there's something wrong. Karza explains his plight and the X-men, having met the Micronauts in their own book, volunteer to return with the Baron to fight his enemy.

Speaking of which... how are the Micronauts doing?

Yeah... They've been better, it seems.

The villain, now calling himself The Entity, takes most of issue two to slowly torture the Micronauts until their wills have been properly broken and they are more than happy to serve their master's cause. Of course, no good mind bending is complete without a little dress up. 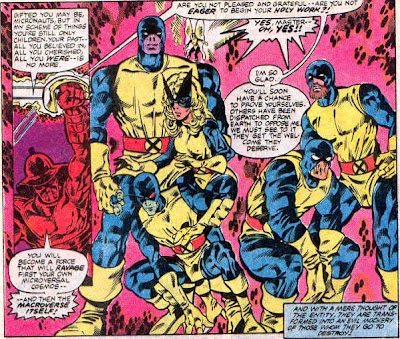 The Entity couldn't possibly know Karza was about to bring in the actual X-men, so why would he outfit the Micronauts as an ersatz X-team... Might it be a subtle clue to his true identity? Ow, you bet... but before we get to that, the X-men and Karza show up to fight the mind controlled Micronauts in a gratuitous attempt to fill some pages. After a while, The Entity pops in... 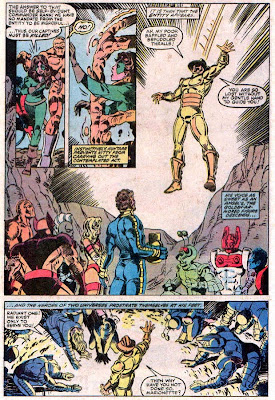 Yes, apparently he is powerful enough to mind control the lot of them with a mere wave of his hand. All of them, except for Kitty, whose mind was still transplanted into Karza's armor. Not being able to control or read her mind, an intrigued Entity takes her to his quarters and puts the moves on her... 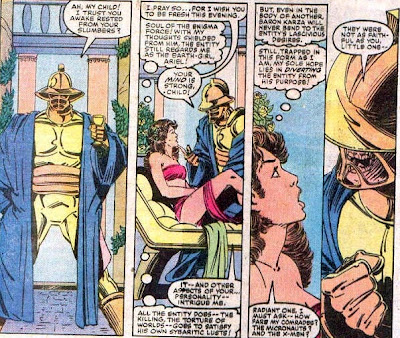 "Your mind is strong, child! It and... other aspects of your... personality... intrigue me."

Yes people, this is a comic book approved by the Comics Code Authority. A comic specifically aimed at young children who will recognise their favourite toy characters and might persuade their parents to buy it for them. And this is what they get: a villain kidnapping a 13 year old girl, shoving her into a dress the size of a handkerchief and then proceeds to leer and lust over her. How this never raised any eyebrows is beyond me.

And there's also The Entity's outfit... For no apparent reason he's put on a Hugh Hefner style robe over his armor! Not even bothering to close it, he lets it all dangle wide open as he enjoys some wine and the 'personality' of a preteen girl.

Think that's creepy? You ain't seen nothing yet! Check back to see how bad it can get... In the second part of Micronauts, Minors & Mind Control: There Are No Words.

Posted by Clarmindcontrol at 11:28 PM

Oh my! I haven't read this since it came out...I'm not sure I'll reread it anytime soon...or if I should check your next post!!