Micronauts, Minors & Mind Control part II: There Are No Words

By now, it should be obvious The Entity destroying the Microverse is none other than professor Xavier himself. If the sheer mental power and dressing up the Micronauts as X-men didn't convince you, take a look at Entity's outfit again... 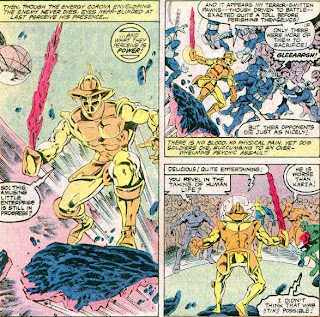 Its an exact copy of the psychic armor Xavier wears when he fights on the astral plane. 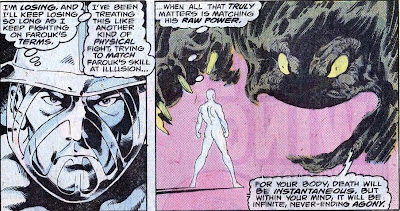 As The Entity reveals, he is actually a manifestation of Charles' repressed dark urges and evil desires, a Mr. Hyde to Xavier's Jeckyll. But he could only come out if Charles was asleep or unconscious. In order to make sure his reign of terror continued uninterrupted, Entity very cleverly locked Xavier in a comatose state. That all changed in issue 3 when Charles became aware of his evil counterpart in a cutesy little scene that proved mind control isn't just for bad guys... 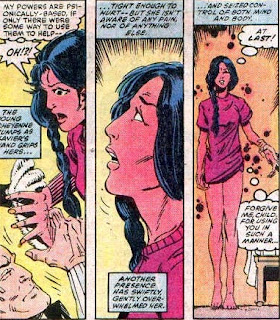 "At last! Forgive me child for using you in such a manner..."

No, no, this isn't quite creepy enough, though it is a nice precursor to the horror to come. Escaping his body by forcing himself into Dani Moonstar as a relay, Xavier managed to access the Microverse and face off against his dark side. And lost. 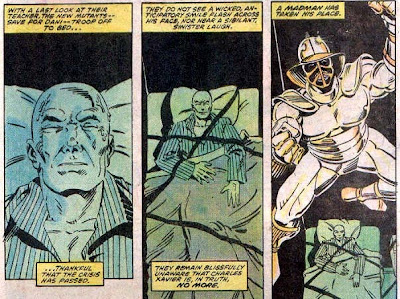 This is where things get really creepy... 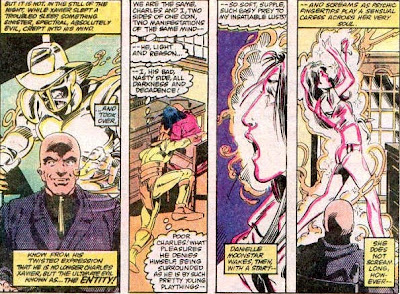 "Poor Charles! What pleasures he denies himself. Being surrounded as he is by such pretty young playthings... So soft, supple... Such easy prey to my insatiable lust!"

Take a close look at these panels. Charles Xavier wheels himself into the room of Danielle Moonstar and proceeds to brutally assault and molest her. One of his own students, a minor for God's sake! Lets forget the equally disturbing fact a 14 year old girl studies in her undies... this is beyond creepy. 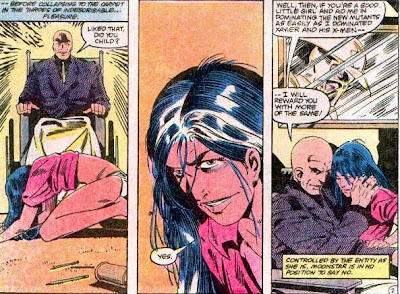 "Liked that, do you child? Well, then, if you're a good little girl and aid me in dominating the New Mutants as easily as I did Xavier and his X-men... I will reward you with more of the same!"

There are no words for the staggering amount of S&M subtext at work here. From Dani's totally submissive slave position on the floor, to her admitting she actually likes it...with Xavier petting his 'good little girl' as the sickening topper.

Lets put this horrid mini series to bed. How did the all powerful Dark Xavier get beaten in the end? Well, lets just say the real Xavier went hardcore on his paralysed ass... 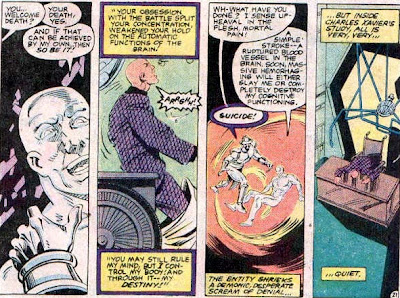 In their defence, Mantlo and Claremont figured that might just be too bleak an ending. So, after a convoluted battle in both the Microverse and our world... Kitty was freed from Baron Karza's armor and Entity died as well... 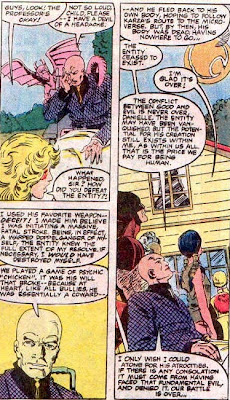 "I only wish I could atone for its atrocities. If there is any consolation, it must come from having faced that fundamental evil, and denied it. Our battle is over..."

Still, he really should have been put on trial for The Entity's crimes. After all its been clearly established it was a part of the actual Charles Xavier. Doesn't that make Xavier at least partly responsible for the deaths of all those millions of Microverse inhabitants?

Not to mention the transgressions he committed against his own students. Not even a simple apology to Dani who he had reduced to his pet gimp? None of that... Xavier gets away scott free.

Ah well, all is well that ends well, I suppose. Live and learn, even though this wasnt the first time Charles' dark side caused trouble. But what the heck... Its not like Charlie would ever allow his dark side to get out of control again, right? 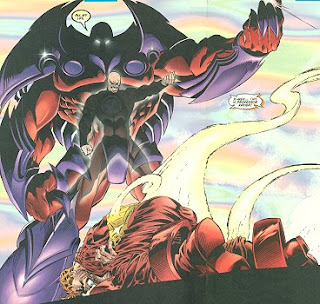 ... Well, at least he didn't try and rape his students that time.
Posted by Clarmindcontrol at 9:24 PM

What a great, snarky, last line for the post...and a shame that, unlike the last line of "Clue", I can never, ever repeat it anywhere!!!