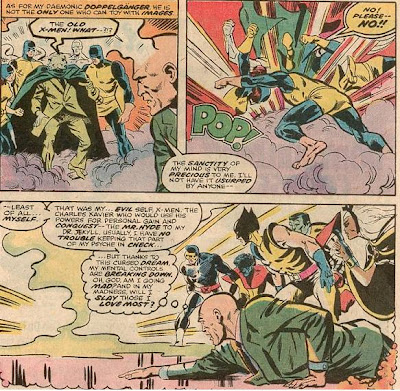 Well, this is a bit of a doozy. In Uncanny X-men # 106, Charles Xavier's own mind turned against him. His long supressed evil tendencies manifested themselves in a very real way, as the Evil Xavier.

Think Onslaught, without the cool design.

Evil Xavier created his own version of the original X-men to fight the current team. And he was winning, until Xavier finally took control again and ended the charade, right in time for this embarrassingly awful filler issue to end.

Evil Xavier resurfaced years later in the X-men/Micronauts miniseries where he threatened the microscopic heroes and the mutants alike.
Posted by Clarmindcontrol at 7:53 PM