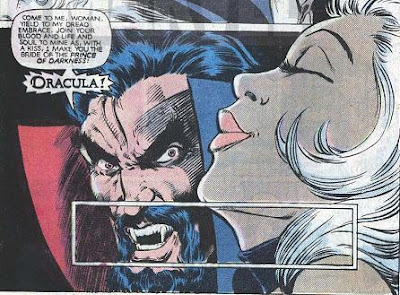 Poor Storm, in the early Uncanny X-men run, she couldn't catch a break. Emma Frost blasted her with a mind control gun back in # 152 and a mere three issues later, Vlad the Impaler shows up, better known to haemophiliacs everywhere as Dracula.

The count infects Storm with the curse of the Vampyr, causing her to fall under the vampire lord's spell.

Yes, she's forced to do his bidding, ever so slowly becoming his mindless puppet. Needless to say, she breaks free in the end but not before she fought the entire team... AGAIN!

Posted by Clarmindcontrol at 9:38 PM