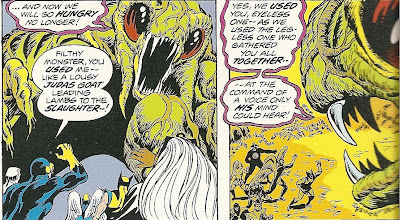 Granted, this is a bit of a stretch seeing as Chris Claremont didn't even write Giant-Size X-men (we have Len Wein to thank for that)... But consider it an eery preview of things to come when Chris Claremont properly starts writing the book.

Who is this Krakoa then? Well, after extensive nuclear testing on an uninhabited atol, the collective flora and fauna of the small island mutanted into a single consciousness that called itself, you guessed it. The birth of the living island caught the attention of Charles Xavier, who sent his original team of X-men to investigate.

The team was easily beaten and only Cyclops managed to escape... But, with good reason, or so Krakoa reveals: he wanted Cyclops to lure some more mutants.

Or, as Scott so poetically says: "You used me like a lousy judas goat".

Naturally, this gets even more silly when you take into account what the 2006 miniseries Deadly Genesis revealed about the Island That Walks Like A Man.

Turns out, it wasn't sentient at all, the voice of Krakoa was a ruse by Xavier to cover up the fact that he'd sent in Cyclops with four other mutants who all died on the island.

So, reread Krakoa's lines again and realise its actually Xavier who is using the monster like a ventriloquist dummy.

Not too hard to believe Charley turned evil once or twice over the next couple of decades... He talked the talk, even if his wheelchair prevented him from walking the walk.

Posted by Clarmindcontrol at 7:34 PM