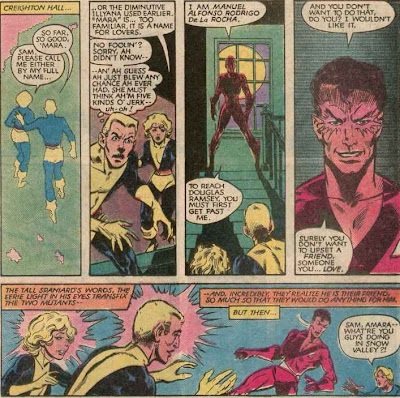 Meet Empath, he's one hell of a Hellion...

Chris Claremont introduced Emma Frosts' own team of young mutants in New Mutants # 16, as an analog to Xavier's brood. This meant most of them had powers that mirrored those of the New Mutants. There was Catseye, a deadringer for Wolfsbane, the rocketeering Jetstream was Cannonball by any other name... and then there's Empath, a mutant capable of controlling emotions, causing people to follow his every whim. Sort of like the New Mutant Karma, only creepier.

Claremont quickly established Manuel Alfonso Rodrigo De la Rocha (but call him Manny, he knows you want to) to be a sleazy, baseless and arrogant pervert who enjoyed bending people to his will. Even his teammates. 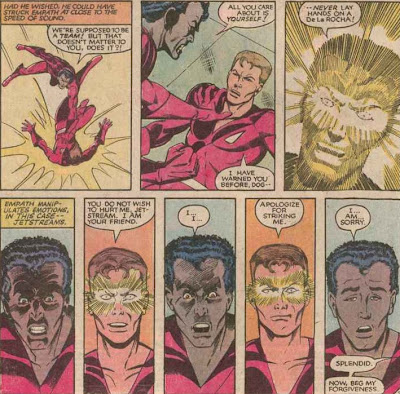 Leave it to Empath to make everybody a certified team player.

Empath's ambitions were made very clear from the start. He wasn't planning on merely serving as a Hellion, he was out to claim position of power as one of the Hellfire Club, who also happened to be sponsoring Emma's Massachusett's Academy.

To prove his mettle, the cocky mutant decided early on to take on the X-men with some of his fellow Hellions ánd the young mutant Firestar who he properly molded a little. 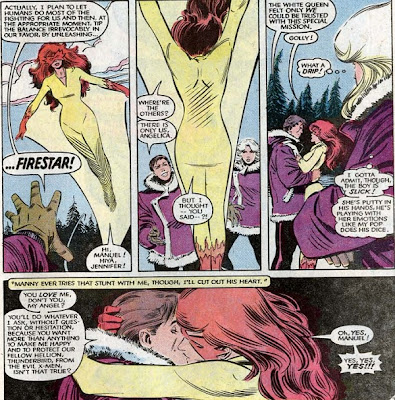 Firestar's presence here opens up a whole different can of worms with continuity enthusiasts, who don't believe there's any room for Angelica Jones to appear in this story in the four issue Firestar limited series that had her as a student at the Massachusetts Academy.

Still, look at Empath go. He not only controls one of Spider-Man's Amazing Friends, he's also able to go toe to toe with ubertelepath professor Xavier himself in Uncanny X-men # 193. 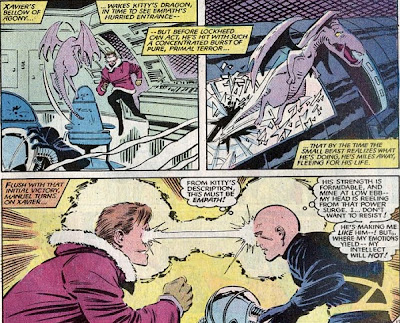 As impressive as this looks, do keep in mind that during their confrontation, Xavier was recovering from near fatal wounds he suffered from a mugging, it is still a testament to Empath's abilities that he was able to hold his own. But his teacher wasn't too impressed,  let alone pleased by his prowess... 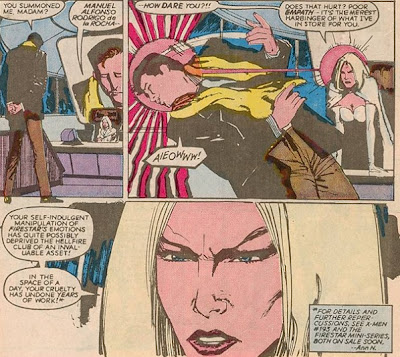 "Your self-indulgent manipulation of Firestar's emotions has quite possibly deprived the
Hellfire Club of an invaluable asset!"

Harsh and stern words, most of the other Hellions would fall in line after getting chewed out by their headmistress. Empath, however, wasn't too impressed with Emma's temper tantrum. In fact, he knew just how to handle the little lady... 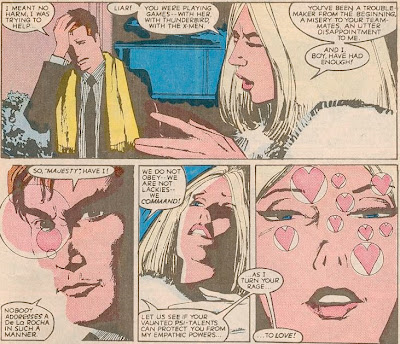 "Nobody addresses a De La Rocha in such a manner.
We do not obey... we are not lackies... we command!"

Looks like Emma is in a bit of a pickle. Apparently overcome by Empath's emotional manipulation, she seems rather hopelessly in love with her rebellious student... ever ready to obey his every command. 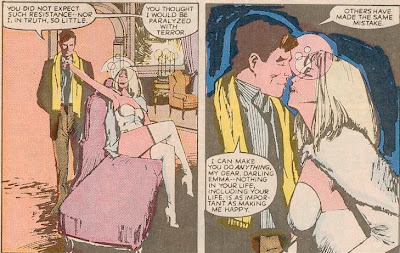 I can make you do anything, my dear, darling Emma...
Nothing in your life, including your life, is as important as making me happy."

Unfortunately for Empath, the White Queen was only playing along to see just how deep a grave he'd dig for himself. She violently lashed out, using her telepathy to temporarily deny him access to his powers to teach him a valuable lesson in humility. That didn't last long, because Emma was forced to restore Empath's abilities when she wanted to gain control of the New Mutants once again. 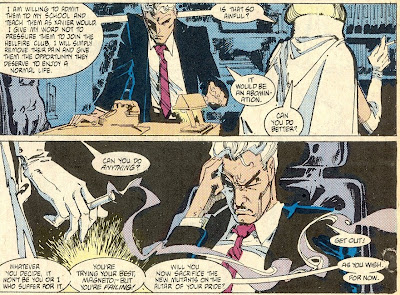 Long story short: during the events of Secret Wars II, the Beyonder killed and eventually resurrected the New Mutants, wiping their memories of the event itself. This caused the young mutants to slump into an inexplicable depression, along with nightmares and zombie like social behaviour. Magneto, serving as their headmaster, was at a loss when the White Queen showed up with the offer to take them under her wing. 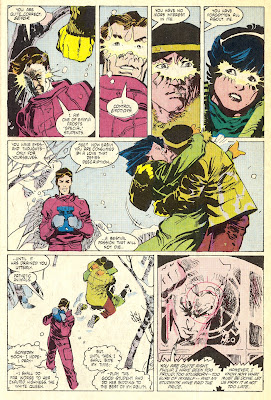 Normally, Magnus would have dismissed her proposal outright, but Empath was monitoring their meeting from a hill on the school grounds, using a pair of binoculars to zoom in on Magneto and influence him so he would be more... open... to suggestion. Still, it was a close call because Empath was caught by Xavier staff members Tom Corsi and Sharon Friedlander who got a taste of Manuel's sadistic streak. 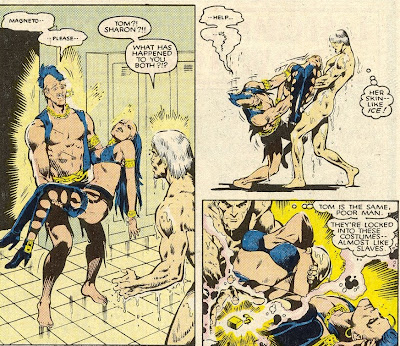 Tom and Sharon resurfaced in New Mutants # 39, weeks after the previous issue, dressed in costumes that locked them together like slaves, collapsing at Magneto's feet (who was just taking a shower). As it turned out, Empath's mental whammy had done a real number on them. 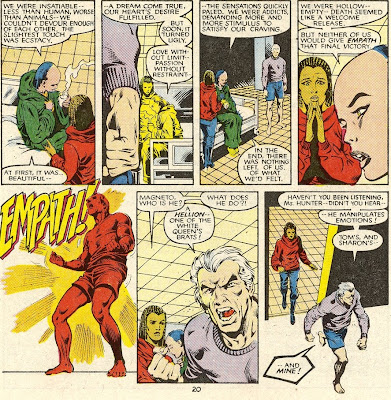 Pissing off Magneto is never a good thing. Magnus travelled to Massachusetts to free his pupils only to be ambushed by the Avengers who were clued in the (former) mutant terrorist was on the move. During these frantic events, Magneto succeeded in reclaiming control of the New Mutants, but he forgot all about punishing Empath in the process...

Still, when the New Mutants finally learned of the torture Empath had put Tom and Sharon through, they inadvertently did Magneto's job for him when they decided enough was enough and planned to take their revenge on the hellacious Hellion. 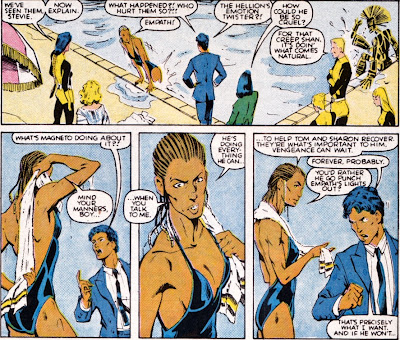 Without informing Magneto about it, of course. He may be the master of magnetism ánd  carrying grudges... But he's still an adult so he's bound to be about as wet a blanket Stevie Hunter's ever so gratuitously toweling herself off with.

Teleporting themselves to Emma's academy, the New Mutants discover Empath is up to his usual ne'er do well-ery... 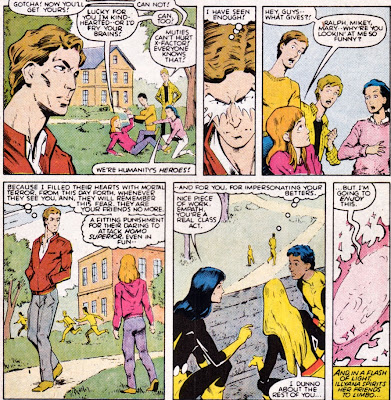 They set a trap for poor ol' Manny at night. When he's about to doze off, Magik teleports him to Limbo where the team subjects him to a nightmarish horrorscape, with a little help from S'ym and the other Limbo demons. But after a while, Empath finds the spine to fight back. 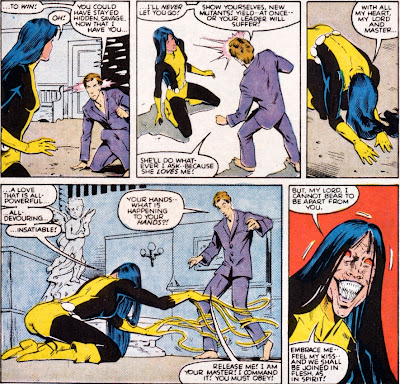 Ah yes... more slavery bits! Even when the good guys do it on purpose it feels mildly uncomfortable to say the least. Still, lets not forget this is all for a good cause... 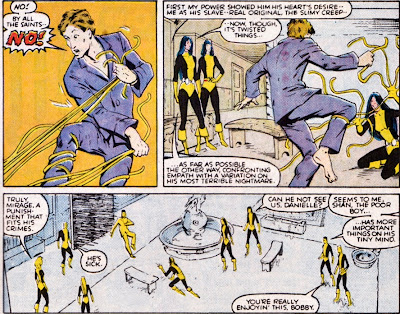 After having properly humbled and humiliated Empath, the New Mutants return him to his room where Empath's fellow Hellions are awaiting them. After Manuel went missing, the team did their best to find him because while he might be a sleaze, he's still one of them.

Yet, that didn't mean Empath could get away with everything as shown in these panels after the New Mutants left. 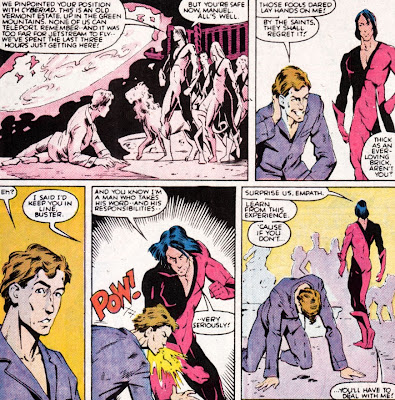 And here's where Claremont's involvement with Empath ends. A character so rife and burdened with mind control issues finally being forced to pay the piper for his many crimes. You'd think future writers would pick up on Manuel having learned his lesson, but, sadly, this was not to be.

Louise Simonson used Empath in a Magma/Nova Roma arc she wrote in New Mutants after Claremont left... And except for surviving the Hellions massacre at the hands of Trevor Fitzroy, Empath wasn't mentioned or seen until 2006's The 198 storyline that showed him with his powers intact, despite the Scarlet Witch's best efforts to the contrary.

When Empath properly popped back into continuity in 2008, Uncanny X-men # 502 revealed him as a slave of the sadistic Red Queen who flogged him to his utter delight for information on the X-men. 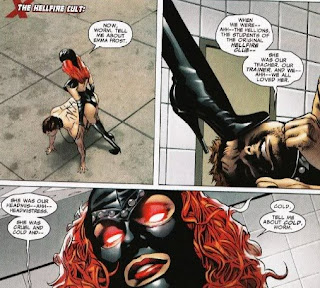 Yours truly might say these sadistic scenes are wrong, but for a character created by Chris Claremont it feels ever so right.
Posted by Clarmindcontrol at 10:39 PM

After Claremont left, Empath was also involved in this storyline: http://www.uncannyxmen.net/story-arc/childs-play