Patchin' Up Some Mind Control 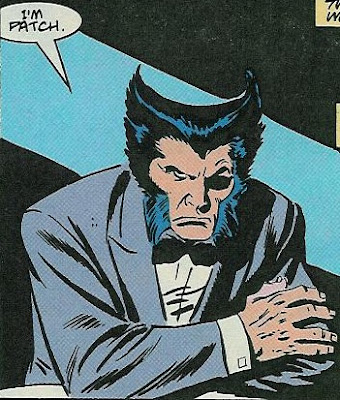 Are you sure, big guy? You look an awful lot like Wolverine to me.

Oy, Wolverine: The Patch era. Lets try and explain this as quickly as possible. During a recent mission, Wolverine and the other X-men died sacrificing themselves to save the universe. After they were brought back to life by the omniversal guardian Roma, the team decided it would be best to keep their resurrection a secret. If their enemies believed the X-men were still dead, they'd be less inclined to get revenge by hunting down the team's friends and relatives.

A sound enough plan, but it also meant the X-men couldn't even contact their loved ones to tell them they were fine. Instead, they went to live in a dusty ghost town in the Australian outback.

Not Wolverine though, he figured all he needed was a little disguise to slip back into the world unnoticed.  Never one for subtlety, he simply put on an eyepatch, called himself Patch and figured he was done. Of course, that eyepatch totally deflected the fact he still had the same hairstyle and basic bad attitude, not to mention those claws popping out of his wrists. But he can't be Wolverine, he's got an eyepatch!

Chris Claremont and John Buscema launched 'Patch' in the first ongoing Wolverine soloseries back in 1988. The opening arc featured Patch on an adventure in Madripoor. 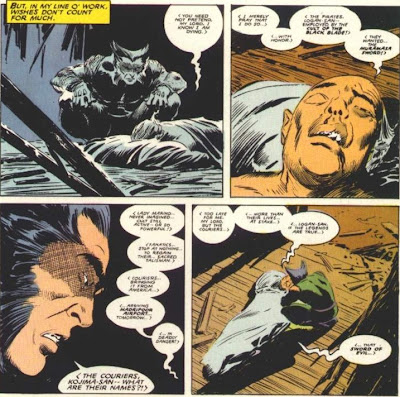 Logan is in Madripoor to retrieve the Muramasa blade, also known as the Black Blade, a deadly weapon that belongs to the Japanese Yashida clan. The blade has the potential to corrupt and steal souls and... Know what, instead of typing up all this exposition, just read Claremont's recap in the second issue and we're right up to speed. 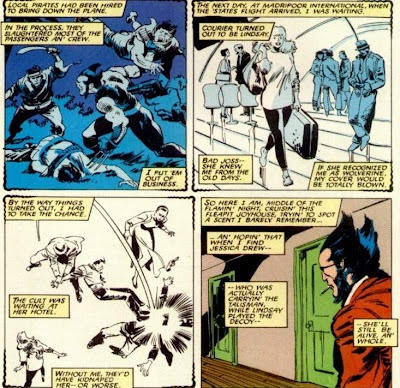 The blade is in the possession of Jessica Drew, a private detective who also used to be the first Spider-Woman. If anyone can keep this dark, corrupting weapon away from the evil cultists who have been after it since issue 1, it has to be the dark angel herself, right?

Jessica had clearly fallen under the spell of the evil blade, so it was up to Patch and the Silver Samurai of all people to fight her. Unfortunately, the blade greatly enhanced both her strength and agility, allowing her to easily ward off the two experienced fighters. That is, until Patch managed to grab the black blade himself. Big mistake. 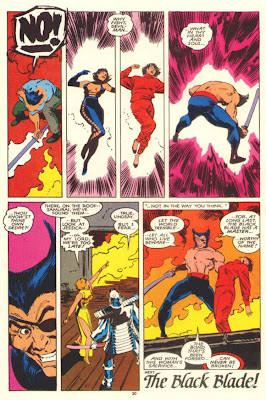 After getting possessed by the Black Blade, Patch took off with Jessica Drew, as Silver Samurai and Jessica's best friend Lindsay McCabe gave chase. They followed them to their lair of the Muramasa cult, just as an interesting ritual was taking place... 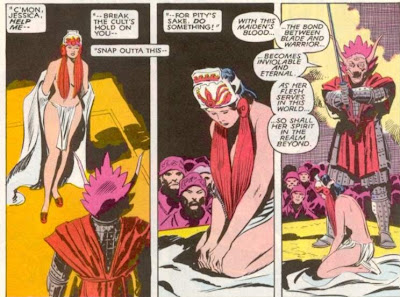 The Muramasa blade longed to taste blood, so a clearly mind controlled Jessica was about to fall victim to its hungry touch. Its hard to ignore the obvious master/slave subjugation undertones of this scene. From the victim all naked and submissive on the floor, to the agressor wearing a fright mask and getting ready to dole out some punishment.

But hey, not to worry, this is still a Marvel comic, not some sleazy smut mag. So, instead of blood and gore, this happens... 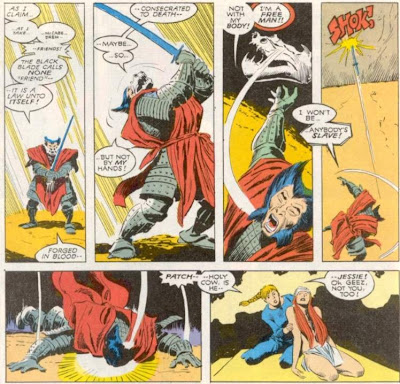 Proving himself stronger than the possession curse, Patch tossed away the demonic blade thereby freeing both himself and Jessica Drew. But, whatever happened to the blade itself? Well many years later it would play a hopelessly convoluted role in the needlessly complex Wolverine Origins series... so lets stick to this resolution. 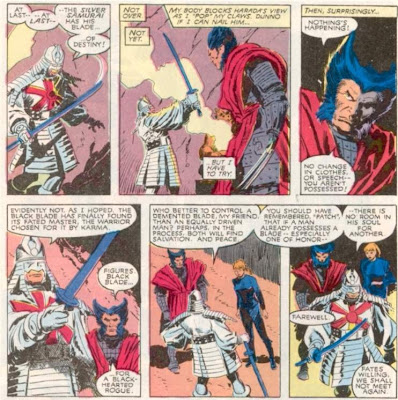 Posted by Clarmindcontrol at 8:18 PM