After 100 entries on mind control, lets give that particular quirk of Chris' a little rest and focus on another of his guilty pleasures: the physical alteration and mutilation of his leading ladies... Preferably by having them grow tentacles for hands. 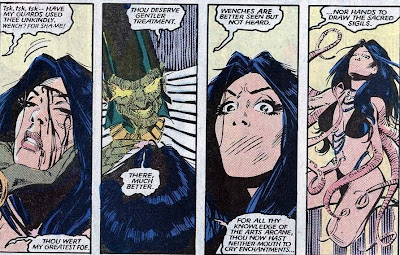 In fact, involuntary body modification goes as far back as the 1950s and the dozens of goofy Superman stories involving mishaps with multicolored Kryptonite. Even Stan Lee had Spider-Man grow some extra arms, not to mention the Thing's unfortunate transformation or Bruce Banner's uncontrollable shifts into the Hulk.

Chris's dabbling in the genre really started during the Brood saga. The parasitic aliens allowed him to combine his first love mind control with his new sweetheart: unwanted transformation. 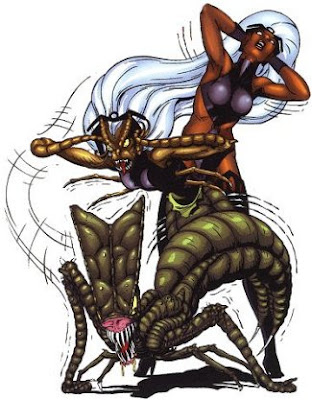 Pretty quickly after that storyline, Claremont decided to explore body modification and notions of beauty some more by having Angel captured by Callisto and her Morlocks Uncanny X-men # 169 & 170. Callisto planned to marry the beautiful X-man, no matter what the other X-men had to say. These issues also introduced the Morlock known as Masque, who... oh, let him explain his own shtick.

Incidentally, Uncanny X-men # 170 was one of the first X-men issues yours truly ever read. These scenes had a lasting impact on an eight year old's mind.

"STOP IT!! She's not a toy, she's a human being... who deserves to be treated with dignity and respect!"

Anyhoo, Masque molds flesh as easily as clay, reshaping a person's body any way he sees fit... Unfortunately, he can't affect his own deformed figure, making him rather resentful of people he considers 'pretty'... 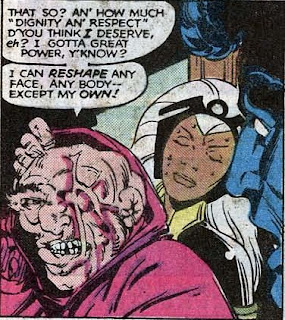 Masque would be responsible for several forced physical transformations, specifically the aforementioned tentacled ladies trick. But he was usually just plain cruel. Case in point: Look at what he put poor Kitty Pryde through in Uncanny X-men # 179. 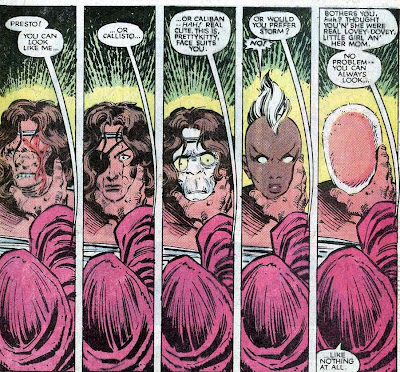 This scene only happened because Kitty was forced to honor the promise she made Caliban after he helped the X-men save Angel. In return, she would marry him and join the Morlocks. However, as part of the Morlock initiation ritual, Masque gets to radically alter your old appearance so you can truly start your new sewer life... fresh faced. 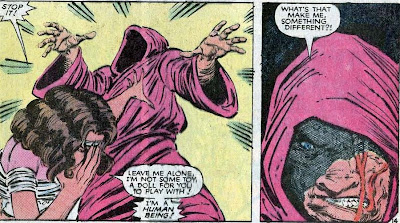 Angering a disfigured mutant who can turn you into anything he wants? Sheesh, and I thought Kitty was supposed to be the smart one. 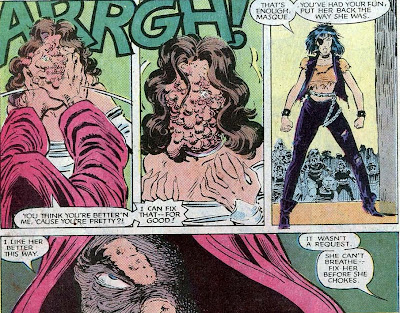 Not exactly a pretty picture. But, easily reverted. In the years that followed, Claremont found Masque's real niche: tentacles! 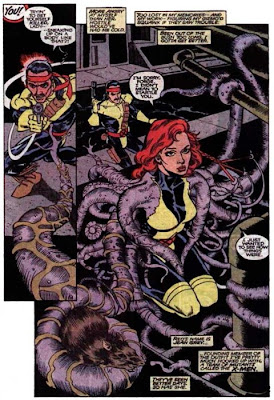 Jean Grey's transformation was all part of a plot too complex to explain here. But it involved Masque recasting some of the Morlocks into twisted versions of the X-men who at that time were presumed missing and/or dead.

After being utterly horrified by her new appendages, Jean actually learned how to control and use them in battle effectively. Naturally, this look was reversed before long. That didn't stop Claremont from having Masque try it again during the events of 2003's X-treme X-men storyline Storm: The Arena. 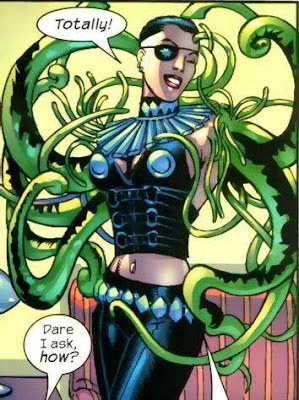 Targetting his old boss Callisto, Masque gave her a set of python like tendrils... an addition Cal actually welcomed and gladly kept her altered appearance at the end of the story.

Speaking of altered appearances... Remember how Masque's main frustration was being trapped in a horrifyingly scarred body his powers couldn't affect. This drove him to commit most of his violent, antisocial acts. Such a cruel twist of fate, if only he could help himself...

Say what? Claremont had Masque experience a secondary mutation that removed this limitation?

Wow, that means he'll jump at the chance to finally fix himself up. Can inner peace be far behind when one's greatest hang up has been dealt with?

Lets see how zen Masque looked when he appeared next... 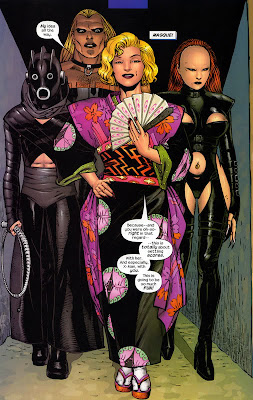 Yup, he changed himself alright. From a sadistic, crusty, old disfigured man in the sewers to a beach blonde Marilyn Monroe-esque bimbo who likes to wear geisha outfits, and runs an underground superhuman fighting arena with her entourage of SM inspired lackies.

What an arc! Chris, you magnificent bastard you. Never...ever change, y'hear?
Posted by Clarmindcontrol at 1:36 PM