The events of Uncanny X-men 190 & 191 have been referenced numerous times on this blog. But apart from peripheral mentions, the utter mind control craziness and borderline fetish goings on haven't been covered yet. So lets dig in. 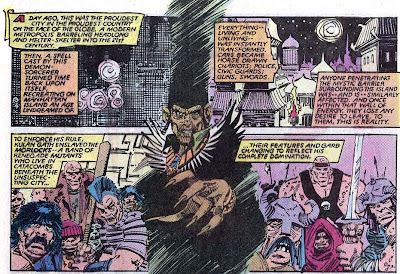 First things first: the ancient wizard Kulan Gath has been able to revive himself thanks to events covered HERE and HERE. He used the blood of innocents to power a potent master spell that converted all of Manhattan into his personal playpen. Buildings, items and people were all transformed into a suitable ancient Hyborean counterpart, with no knowledge of their previous lives.

Storm was living the life of a pirate, who was chased by Callisto and her band of Morlocks who acted as Gath's mind controlled toadies. This scene on page 4 of # 190 shows the tendency of this twoparter to indulge in all the mind control, bondage and SM fetishes this side of Cimmeria. 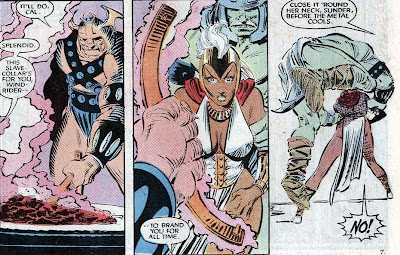 The masterspell only reached as far as Manhattan. Once you crossed the barrier, you'd revert to your old self again. This happened during Storm and Callisto's fight. The two managed to get to dry land where Storm was contacted telepathically by one of Gath's ancient enemies: Selene, the Hellfire Club's Black Queen. 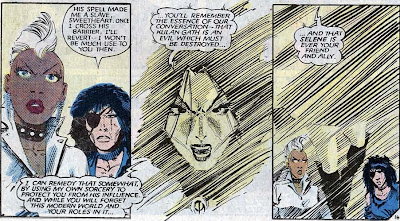 Quickly filling them in about the situation, Selene asked Storm and Callisto's help in defeating Kulan Gath. The two didn't really trust Selene, but it wasn't as if there was any other real choice. They moved back to the island where Gath had been busy mind controlling people left and right.

The techno organic alien Warlock looked on in horror as Gath twisted and reshaped his fellow New Mutants into new shapes that reflected all the evil they feel within. Luckily, not everyone was as easily swayed by Gath's magic. 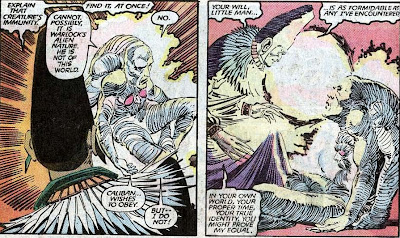 After taking over Manhattan, the demon sorceror sought a means of tracking all super powered beings so he could bring them under his control. Wary of technology, he didn't use Xavier's Cerebro mutant detection system but combined Charles Xavier and the mutant detecting Morlock Caliban into one being. The docile Caliban went along with it, but Xavier wasn't so easily dominated.

On a sidenote: the grotesque Xavier/Caliban creature is possibly how the real Caliban might have turned out back in the Chris Claremont / John Byrne days. The duo had the idea that this barely human looking mutant called Caliban was able to sense other mutants but was shunned due to his horrifying mutation. He'd join the X-men as an organic Cerebro, living in a seperate wing of the mansion.

Anyways, back to the story at hand. Kulan's guards finally managed to bring in Selene, which meant it was high time for some old fashioned 'torture the chained up scantily clad prisoner wearing the hot black leather bikini.' 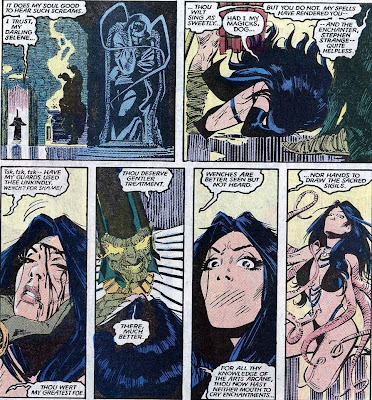 "There, much better. Wenches are better seen, but not heard."

Chris, Chris... How this ever got past the Comics Code Authority back in the day is a wonder indeed.

Posted by Clarmindcontrol at 12:54 AM