Warwolfing down some mind control

Remember how Rachel Grey got mind controlled by Spiral when she entered her interdimensional Body Shoppe? 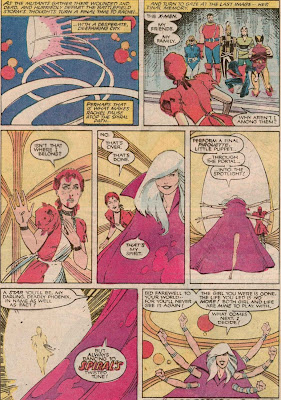 As it turns out, Spiral was working for Mojo, who wanted Rachel as a pawn in his television imperium. A baby Phoenix equals great ratings, but holding on to so vast a prize as an elemental force of life and death turned out to be trickier than even the trickster could have predicted. Rachel managed to break free, which caused Mojo to send his Warwolves against her in the opening pages of the 1987 Excalibur special The Sword Is Drawn.

The Warwolves are expert trackers, capable of locating their prey even when it flees to other dimensions. Which is exactly what Rachel did after she unwittingly borrowed a page from the late great Jim Morrison and broke on through to the other side. 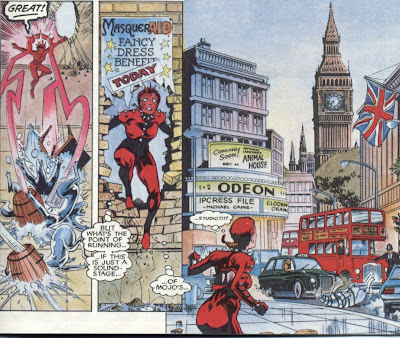 The Warwolves followed Rachel into London, where she found shelter with fellow X-men Shadowcat, Nightcrawler and Captain Britain and his ladylove Meggan. By the end, this ersatz X-men team decided to stay together and form Excalibur. But the Warwolves were still gunning for her, as the first two issues of the Excalibur ongoing proved. 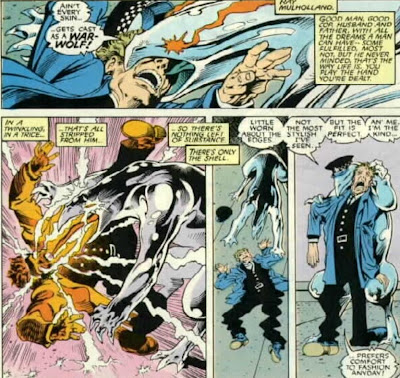 What makes the Warwolves so good at their job, is their ability to take over people's bodies. They drain the mind and soul of their victims, leaving only an empty shell they inhabit as easily as one would change a shirt.

Calling this a form of mind control is a bit of a stretch, but then again... fitting these pleasantly plump killing machines inside a human skin also calls for a bit of stretching. Also, for some unknown reason, Rachel can feel the death of the Warwolves' victims, causing her incredible agony. 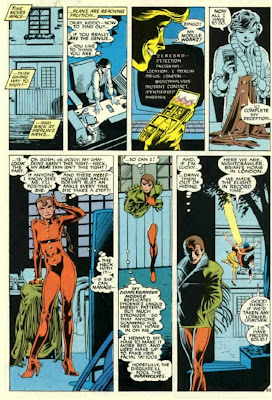 Knowing the Warwolves are still out there looking for Rachel, Kitty decides to take matters into her own hands. She tries to draw the Warwolves out of hiding by dressing up as Phoenix, even using a Cerebro module to copy Rachel's unique power signature.

Before long, she's assaulted by the Warwolves who are dumbstruck by 'Rachel's' phasing abilities. Still, she gets eaten by a Warwolf who starts acting a little strange not long after that. 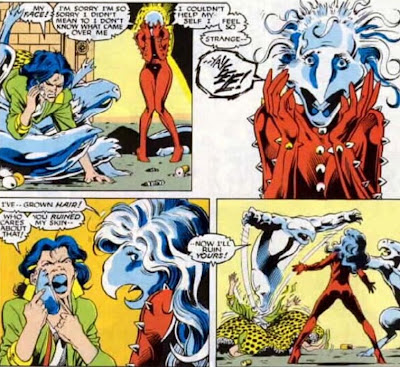 Yes, Kitty was still alive inside the Warwolf... Its like a scene from Little Red Riding Hood, only slightly creepier... 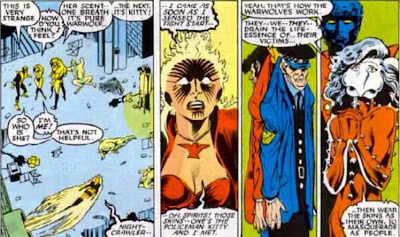 Poor Warwolf, so confused, so frightened. Makes you wonder what else can go wrong. 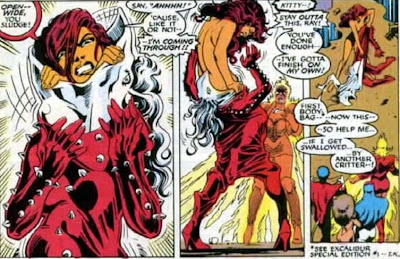