After five elaborate posts on all the mind control misery Claremont put the X-men's Sage through, lets flip the script a little and take a look at something rather rare: Chris Claremont judging another writer for using mind control.

Over 30 years ago in Avengers # 200, writer David Michelinie and artist George Perez celebrated Earth's mightiest heroes' anniversary by having Ms. Marvel give birth to a baby she didn't even know she was having until a few days before she went into labour. 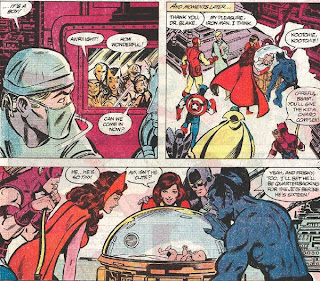 One might think that the unexplained, accelerated pregnancy of one of their own would cause the world's premiere superhero team to be, at the very least, a little cautious. But look at them gushing over the infant.

Yet, that's not even the worst part: the child quickly grows up to be a man who calls himself Marcus Immortus, son of the ruler of Limbo and... the man who got Carol pregnant in the first place. Guess that explains that convoluted storytitle The child is father too... And wouldn't that make a great episode of Maury?

Without batting an eye, the Avengers accept Marcus' story about how he was trapped in Limbo after his father Immortus died and that his only way of escape was by being born in 'our' dimension. He fell in love with Ms. Marvel while using Limbo's time scanning machinery to study Earth and an idea formed: He yanked her to his domain for, well... see for yourself...

"With a subtle boost from Immortus' machines... you became mine"?

As if dragging someone to your place against their will and holding them hostage for weeks weren't enough reasons for concern, he freely admits he was mind controlling her so she'd be more open to him... impregnating her with himself. Impregnating? Lets just call it what it really is: he drugged and raped her.

Yet, the Avengers didn't seem to notice or care. Not even when Carol suddenly declared she'd realised he might be the best thing that happened to her in a long time, prompting the decision to return to Limbo with her 'son'/'lover'/abducter... 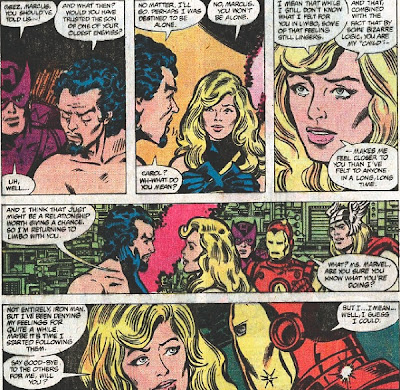 Sheesh, who knew Limbo was a suburb of Stockholm?

Avengers # 200 caused a lot of controversy among fans, and rightfully so. Even Chris Claremont, who wrote Ms. Marvel's first solo title a few years before that, got upset by how she was literally shipped off to Limbo. So, he set off to right a wrong by having Carol return to Earth in Avengers Annual # 10 (1981).

As a coda to the annual and the storyline from Avengers, Carol confronted her former teammates who were still blissfully unaware of what they'd let happen. They even wanted to know what happened to Marcus, because the two of them appeared so much in love. 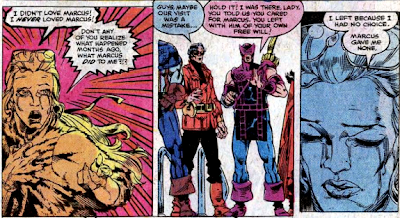 And she went on from there... 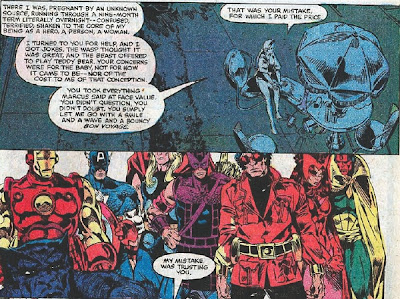 (But, to play devil's advocate for a second, no one took into account the possibility that Carol wasn't the only one Marcus was mentally influencing back in Avengers # 200. Who's to say he didn't use Immortus' machines to make the team less suspicious of him?)

Getting back to Chris Claremont...Some might say his little tirade is a little unfair, considering he does this sort of thing all the time. Even to Carol herself. Heck, you could even make the case that Claremont was being a little childish, lashing out at another writer for what he had done to 'his' character...

Either way Avengers Annual # 10 reads like the pot calling the kettle mind controlled. But fair's fair...

Be that as it may: not being wrong doesn't necessarily mean you're less of a hypocrite, as we'll see next time.

Posted by Clarmindcontrol at 3:29 AM

Great to see you posting again! Thanks for the examination of poor Sage. I really liked here character - but she got batted around too much over time (both mentally and physically)