Calling Chris Claremont's New Exiles a bit of a convoluted mess might not be too charitable...

But it is the truth.

Fans never were too eager to have Claremont take over Exiles, a book that had been doing just fine under longtime writer Tony Bedard. When Chris took over in issue # 90, he quickly made it his own by bringing in Psylocke, another one of his pet characters. After ten issues, Exiles ended with issue # 100, making way for Claremont to introduce a whole new cast in New Exiles.

One of those New Exiles was Sage, who just recently had all the knowledge of Roma, eternal ruler of the Omniverse, dumped into her mind. 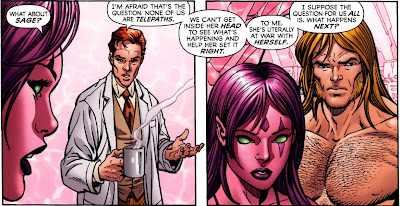 Needless to say, what happened next was Sage getting a little crazy. In almost every issue, she'd have to fight with some incarnation of the evils Roma had been aware of, and even her former fake personality Diana Fox popped back up from time to time. 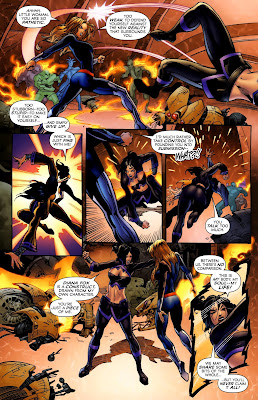 Its got to be a little confusing when you're fighting in your own mind while also trying to survive the fight on the outside of your skull... Here, Sage takes on bad guys ánd Diana Fox in scenes from New Exiles # 5 and 6. 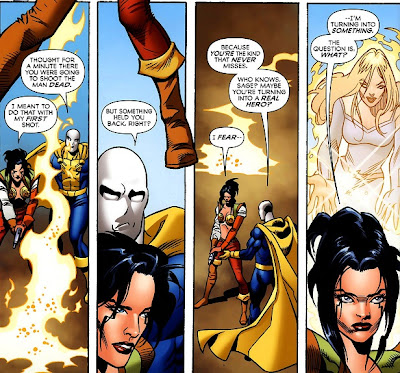 The Diana Fox persona was subtly trying to take over Sage by influencing her actions in the field. 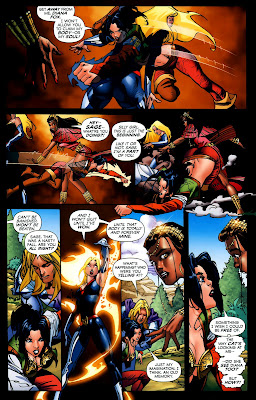 So, the essence of Roma and a fake personality are fighting to take over her mind... Two mind controlling influences in one single brain. That's pushing it, even for Claremont.

Thankfully, there's also some old fashioned outside mind control to deal with... Meet the mind controller Purge in New Exiles # 10. 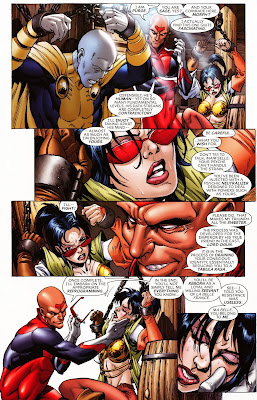 Ahhh, vintage Claremont mindcontrol... you have your victims all chained up, nowhere to go, a little sweat, some passionate pleas and a smirking bad guy who assures you that resistance is very futile indeed. Almost makes one nostalgic for the old days....

Despite his best efforts, Claremont never managed to make New Exiles the powerhouse of a title he had hoped it would be. Sales floundered and Marvel decided he'd better wrap things up. Claremont had a lot of ground to cover, especially if he wanted to solve the big drama he had set in motion: the multiverse was destabilising, causing entire realities to literally dissolve into nothingness...

In order to stop the unravelling of all that is, someone had to become one with the living computers of the Panoptichron. Yes, apparently the omniversal observatory the Exiles had been using as their base, was actually the source of the disturbance... That makes about as much sense as believing looking at shooting stars through a telescope won't cause them to burn up in the atmosphere.

Ignoring all that pesky common sense, lets see who volunteered to become the heart and soul of the Panoptichron... 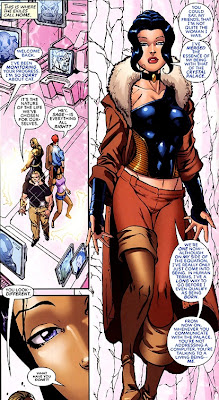 Sage herself seems pretty content with her new status quo, Psylocke appears less happy about it in the eighteenth and final issue of New Exiles. 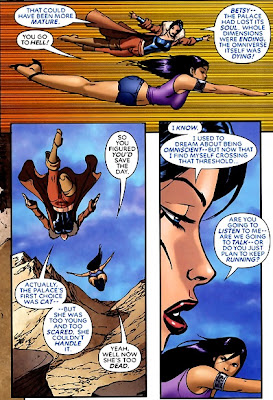 If anyone is trying to run, its you Sage... Running away from any semblance of common sense, that is. Check out what else she had to say about her new role as the voice of the omniversal GPS tracking system... 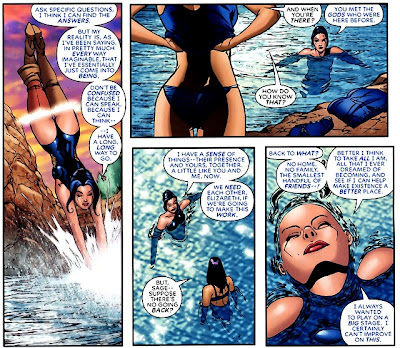 "I always wanted to play on a bigger stage. I certainly can't improve on this".

Thus ends the Sage Saga... The tragic tale of a proud, strong woman who valued her personal autonomy above everything else, a woman who had been locked in a struggle for her very sanity with two competing personalities in her own mind... freely gives up everything she is, to serve as the user interface of a computer system.

And to add insult to injury: she wasn't even the system's first choice.

Posted by Clarmindcontrol at 1:39 AM

Sage's history - oh, that mess is so very hot indeed...