Besides his obvious soft spot for mind control, Chris Claremont also has a well established penchant for writing strong women... Scratch that, strong women who preferably dress in black leather. This makes Chris a natural fit for writing...... 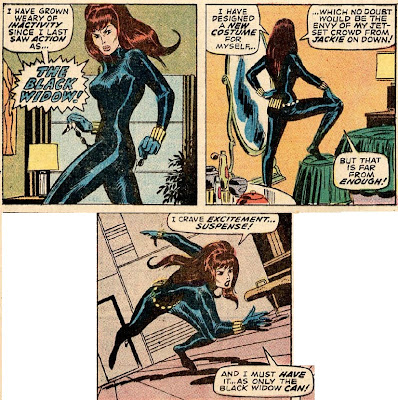 No worries Black Widow... you won't soon forget any of the thrill ride that is Marvel Team Up issues 82 through 85... Ow, wait, you don't know who you are to begin with? Ah, guess that explains issue 82 then.

The arc starts out routinely enough with Spider-Man stopping the mugging of a red haired woman. However, he's shocked to learn that she's a dead ringer for the Black Widow... Yet, that's not who this redhead claims to be. 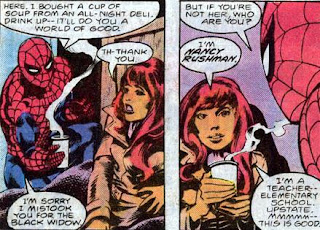 Know what isn't as good? Late 1970s Marvel coloring. Honestly, 'Nancy Rushman' either looks like an Asian lady wearing a red fright wig, or a low budget Tigra. Anyways, Spider-Man can't get over the fact that this supposed elementary school teacher looks so much like a certain ex Soviet super spy he knows.

He spends some time trying to figure out whether or not Nancy is the Widow, even getting her to dress in a spare Black Widow uniform. This brings up some rather painful memory flashes. 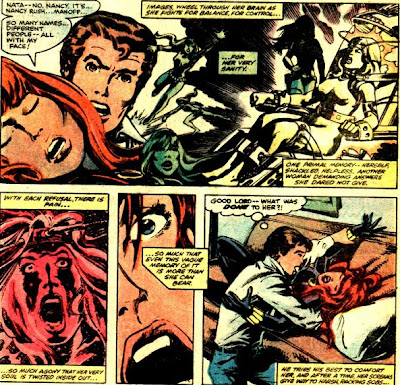 Despite that ordeal, nothing substantial comes in to focus. Spider-Man decides to take 'Nancy' to SHIELD, the spy organisation Black Widow works for. But, it seems like the agency has already found them. 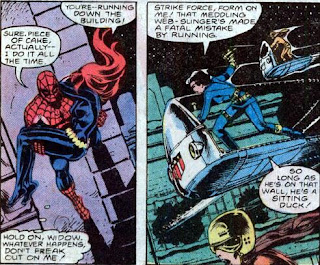 Why would SHIELD be attacking one of their own? That's so... out of character for them. Almost as if they were... Mind controlled? Ah yes, that would be this lady's doing: 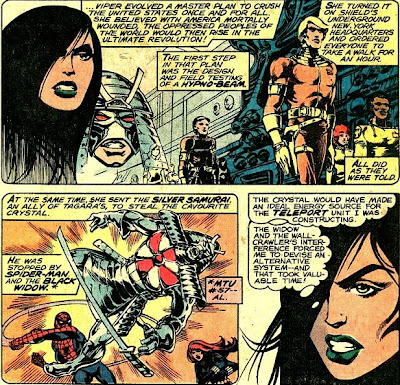 The Viper had been secretly plotting to conquer the world using a hypnobeam (mind control by any other name) to take over the Helicarrier, SHIELD's massive flying fortress.

Her big plan: by crashing the SHIELD base on Washington DC just as then US president Jimmy Carter was giving a major policy speech, not only would she take out the president and most of America's leaders,  it would leave the entire planet shocked and vulnerable for her terrorist group Hydra to move in and make their move. 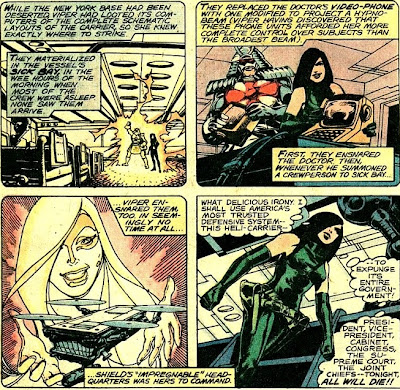 Now, I'm no expert on world domination, let alone the logic of a terrorist supervillain who insists on wearing emerald lipstick...

But if you're crafty enough to come up with a mind controlling hypno ray so potent it turns an entire  Helicarrier full of superspies into your slaves... Wouldn't it be a lot easier to just walk into the White House and activate aforementioned device? Less of a mess, more mindless drones in high places to boss around. Just a thought...

Still, getting back to the mystery of Nancy Rushman and Natasha Romanova... The Widow had actually discovered Viper's scheme early on, but was captured and subjected to intense torture. So intense, in fact, that this happened: 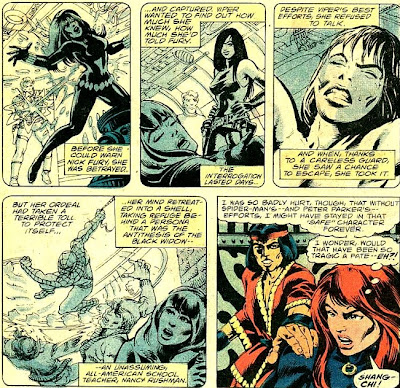 So... If you were Viper and you have a mind control device lying around that turns anyone into a helpful slave with the flick of a switch... Would extreme torture to the point of self induced schizophrenia and multiple personality disorder really be the way to go?

Needless to say, by the time the trilogy ended in Marvel Team Up # 85, Viper was defeated and the Widow returned to normal, thereby condemning the Nancy Rushman aspect of her personality to 'die off' as well.

You might think ridding yourself of an unwanted alter ego would be a good thing, especially when it only came into existence because your mind couldn't handle the intense trauma it was being subjected to. But guess what... 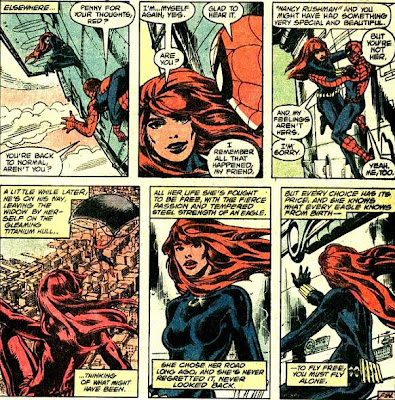 Yes, Spider-Man is actually a little disappointed Black Widow was herself again...

You see, in the last three issues, Spidey had developed more than a little crush on 'Nancy Rushman', the scared, wimpering school marm who hang on to him for dear life whenever anything remotely threatening happened.

So that's our hero: a guy who forces a scared, fragile woman to change into the woman *HE* knows she could be, even dressing her up in skintight black leather. And once he succeeds in his goal, he leaves heart broken once it becomes clear she isn't as subservient and pliable after all...

Bet you wish you had a miniature version of Viper's hypno ray in your beltbuckle now, eh, Spidey?

Posted by Clarmindcontrol at 11:07 PM

Imagine the shock when Spider-Man actually learns that the Black Widow likes him. But she prefers not to admit that to him.