And in part three of The Sage Saga, we cover the 2005+ era of Chris Claremonts' love affair with the character.

Sage had recently left the cast of Uncanny X-men to guide Roberto DaCosta, aka Sunspot, who had taken over as the leader of a new Hellfire Club. Sage planned to guide him in a Tessa-like capacity, the way she used to for Sebastian Shaw. But nothing much came of this...  Shortly after her departure from Uncanny X-men, she popped up in the early issues of New Excalibur, to help out Captain Britain and his team in the UK after the events of House of M (the 2005 company wide crossover that decimated the mutant race when Wanda Maximoff wished most of them away).

She made her entrance right in the middle of a classic Claremontian scene... 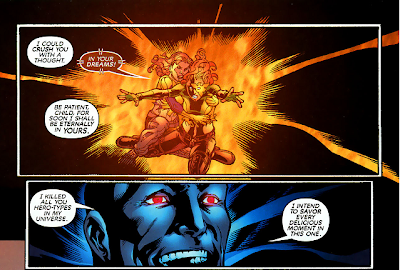 Meet Shadow Xavier, leader of Shadow X... A group of X-men from an alternate dimension where Xavier and his first team of pupils had been turned evil by the Shadow King, hence the snappy name.

Shadow X had recently invaded 616-London, and (new) Excalibur was trying its darndest to keep the black leather clad band of mutants at bay. Shadow Cyclops was a handful, Shadow Beast, Iceman and Angel were mean as can be... Not to mention Shadow Jean who used her telekinetic powers to stop hearts.

But the Shadow King possessed Xavier turned out to be the real powerhouse of the group. He was fighting Excalibur on multiple fronts, carefully trying to mind control Nocturne, Kitty Pryde, Rachel Grey and Psylocke, who had used her telepathic abilities to send Rachel and Kitty into Nocturne's mind to save her. Despite all their efforts, it seemed like a hopeless cause until THIS happened...

That Sage... Say what you will about her... How she might have a detached, cold, aloof and nigh impenetrable computerlike mind with a personality to match... That doesn't mean she's unable to pull off a last minute rescue like nobody's business...

Also? Appearing as glazy eyed and dazed as the mind controlled folks you're trying to free? Nice touch indeed!

Sage quickly became a part of New Excalibur, which meant she had to face her turn at bat when it came to mind control. Take for instance the time the Warwolves showed up... 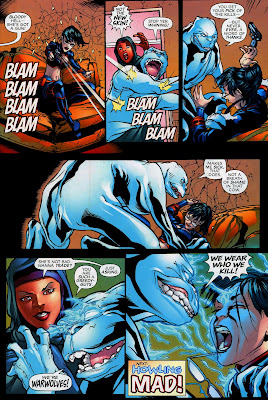 Now, for those of you who aren't too well versed in early Excalibur issues... the Warwolves are hound-like aliens that have the uncanny ability to track prey and absorb their mind and soul, leaving behind only an empty husk they can take over.

Its like mind control, but without any pesky host lingering around to take over, should you get thrown out. Lets see how it worked out for this Wolf. 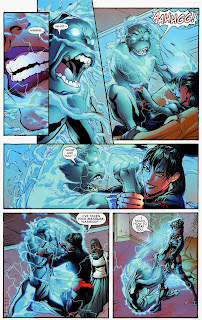 Ouch... Ah well,  for a change, the Warwolves found Sage's computer mind too much to deal with.
Still, that didn't mean Sage was safe from any other mind control shenanigans... After having escaped the Warwolves in New Excalibur # 4 and # 5, lets see what went down in issue 6.

While en route to question Shadow X, it became apparent that Shadow Xavier was still causing mayhem, despite being drugged out of his mind. Here's a sample of the naughty shenanigans he tried to pull. 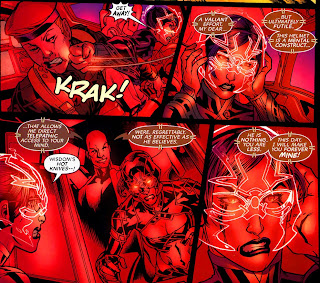 A classic example of mind control, if ever there was one. Shadow Xavier very gleefully tries to suade Sage over to his cause by causing a mental gimp mask to form over her... If it remained there long enough, she'd be his... Body, mind and soul forever... Ah, the usual Claremont cliches still work. Or do they? 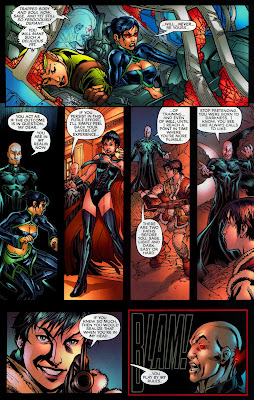 Truth be told, I *DID* cheer a little while reading this the first time. Despite his best efforts, Shadow Xavier doesn't succeed in turning Sage over to his cause. Even worse for him: she seems thoroughly unaffected by his blustering and uses the fact that he is in *HER* mind to devastating effect.

Shortly after those issues, Chris Claremont experienced something of a health scare. On March 5th 2006, while attending a comics conference in Italy, he collapsed due to what was later officially diagnosed as 'cardiac stress'.

To be fair, cardiac stress is but a byproduct of something greater, so its generally assumed Claremont suffered what should at the very least be considered a mild cardiac episode. Still, even the mildest of myocardial trauma isn't to be taken lightly... It took him months to recover from this incident and when he returned to writing full time with issue 16 of New Excalibur, all of a sudden *THIS* happened to Nocturne... 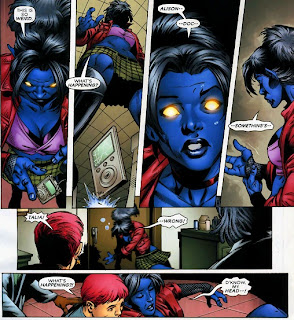 Thank goodness she collapsed right in the middle of a hospital, this allowed the main characters to voice what all of the readers were collectively thinking at this point:

Yet, the diagnosis was blatantly simple. Chris Claremont was working through his recent brush with death by projecting his own health scare on one of his characters. In this case, it wasn't a 50+ year old slightly overweight British writer who almost died when his heart stopped, but a blue skinned otherdimensional atlethic mutant girl in her early twenties who gets diagnosed with...

And a pretty brutal one at that, even though the writing clearly points out it could have been much worse. Try telling that to Nocturne, a natural acrobat who suddenly found the right side of her body totally unresponsive. The recovery process was long, hard and ultimately rather reflective of what actual stroke victims go through to in their efforts to regain what they have lost.

Throughout all this, there was Sage, sitting in the corner of Nocturne's hospital room, subtly urging the demoralised girl to give it her all. Not by cheery peptalks or offering a sympathetic ear, nothing quite so boorish. No, she used her telepathy to ever so gingerly confront Nocturne with who she had been. Resulting in scenes like this... 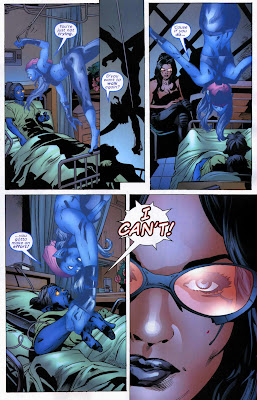 Sage knew better, of course... that's her job. She kept coaxing Nocturne to keep on trying, but also showed a softer, gentler side. One of the more interesting things to consider about Nocturne suffering a debilitating illness, was the fact that access to her mutant abilities was left intact.

She was still able to jump into another person, essentially taking them over and using their bodies as  her own. Ideal for a stroke victim who was basically a prisoner in her actual body. Yet, despite all this, she wouldn't even try. So, after subtly controlling her mind, Sage had this exchange with Nocturne in a classic example of turnabout is fair play... 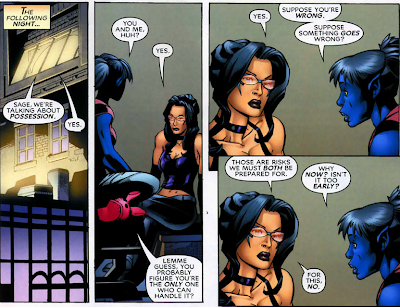 Now, call me subtext crazy or plain old dirty minded... but if you skip over the thought balloon that stressed they were talking about possession... their whole dialogue is dripping with lesbian subtext. "You probably figure you're the only one who can handle it"... tee-hee. 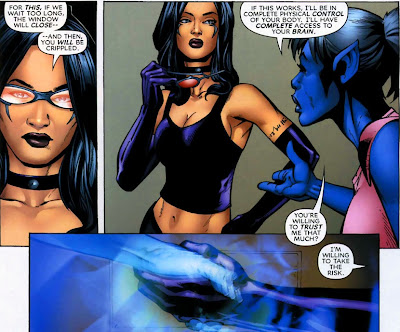 Ahhh, the living computer allows herself to be taken over... A nice change of routine for Claremont and Sage, because usually mind control means violent take overs and fights to the death over your own sanity.

Still, this is a nice scene that sort of dove tails one from years earlier, when Storm and a desperate Rogue had a heart to heart about the nature of Rogue's absorption powers, ending with Storm freely offering herself to Rogue... 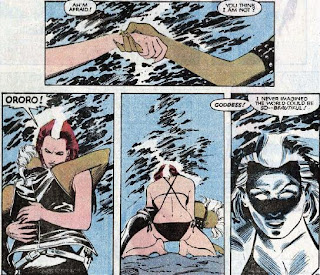 ... The symbolism is ever so striking... Two half naked women hugging (both in black, one in leather!), one freely offering herself to another, willing to hand over body and soul to her partner, who carries her in her arms, fondling her flesh and then exclaiming "I never imagined the world could be so... beautiful".

Semi sapphic symbolism so potent, you still wonder how the Comics Code Authority let this pass...

Next time in the fourth and probably final part of the Sage Saga: Taking A Big, Steaming Info Dump On The Living Computer, we touch upon the remainder of New Excalibur and X-men: Die By The Sword, right up until we end end up in New Exiles. Best be prepared for plenty of special guest appearances by a little lady called Diana Fox.

Posted by Clarmindcontrol at 7:44 AM