"Brood her? I hardly know her!" 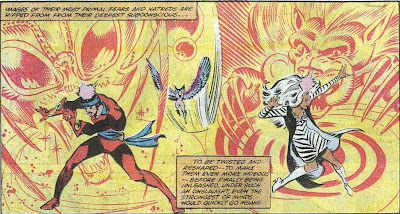 As if it wasn't too obvious by now... Chris Claremont sure loves mind control. Take Uncanny X-men # 155 for instance, in which the team has to face Deathbird, an old Ms. Marvel villain who turns out to be princess Lilandra's sister.

Kidnapping both Lilandra and professor Xavier, she almost got Earth destroyed by the Shi'ar imperial fleet. But despite all these grand schemes, she was also ready for some one on one action. For instance, in the panel above where one of Deathbird's henchmen fires on Storm and Corsair.

Apparently, it was some form of mind altering beam, which caused them to hallucinate and attack their friends. Same old, same old, you might say... Yes. But the tentacle pulling the trigger actually belonged to a member of the Brood species. Artist Dave Cockrum originally designed it as a one off character, but both he and Claremont agreed that the creature's look merited further stories... So,  a few issues later (Uncanny X-men # 162) we are treated to this delicious scene... 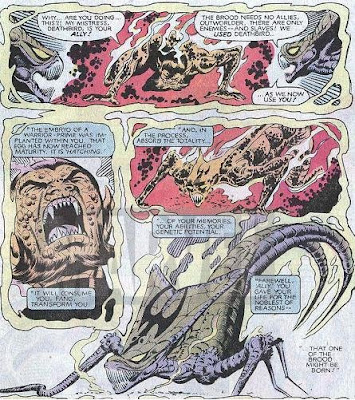 Fleshing out their backstory, Claremont reveals the Brood are parasitic race of insectoids that infect other species with their offspring. The Brood eggs slowly mature in the host's body and once they hatch, they literally transform the body and mind of their victims.

The Brood are led by a gigantic queen who showed up shortly after the X-men's fight with Deathbird. The team was mind controlled by the queen, thinking they were at a fancy Shi'ar banquet in their honour when in fact, the queen was planting her royal embryos in each and every one of them.


But the Brood queen hadn't taken Wolverine's mutant healing factor into account. His immune system saw the Brood egg as an infection and proceeded to deal with it accordingly, very nearly killing Wolverine in the process. 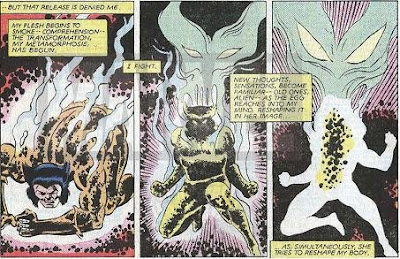 Learning of his fate from a Brood he ambushed, Wolverine rejoined the X-men but couldn't bring himself to tell them they were carrying young Brood queens. Through various rather well plotted means, the other X-men (and Lilandra!) eventually did find out and in the end managed to beat the embryos.

And that, as they say, is that... Well, no... There's just one little snag. The Brood queen boasted that the X-men had already lost, despite the fact they just beat her on the Brood homeworld of Madrizar. Y'see, there was one egg left. Guess who got it... 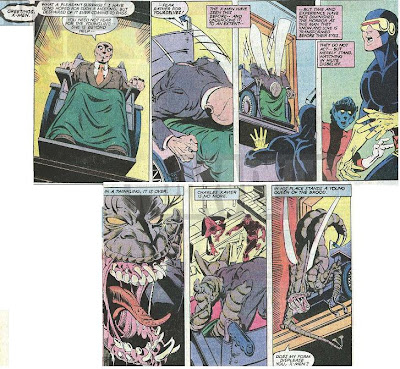 You guessed it! None other than the X-men's leader had become infected by the Brood. Racing back to Earth, the X-men tried to save their leader but to no avail. Charles Xavier turned and in his place, a young Brood queen arose.

After a fierce battle, Xavier briefly managed to regain control of his mind, begging his students to kill him. Luckily, thanks to the advanced Shi'ar medical knowledge no one had to off the prof. Using some skincells, the Starjammer's doctor Sikorski cloned a new body and managed to remove Xavier's mind from the Brood creature.

Incidentally, the Brood embryo had been infuencing Charles' decisions for quite a while. Long before he turned, Xavier was doing the Brood's bidding. For instance, by gathering a new group of young mutants around him. Officially, he merely wanted to help them learn to control their powers... unoffically, the Brood wanted to infect these New Mutants as well in their first steps to conquer Earth 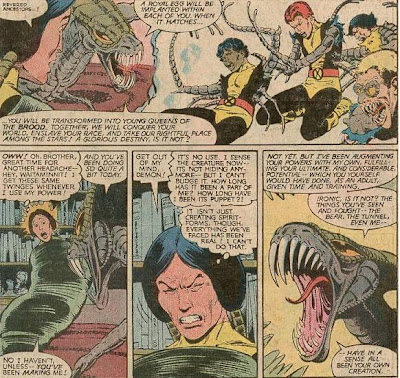 In New Mutants # 3, semi-psychic mutant Danni Moonstar finally discovers the source of the nightmares she's been having. Its the alien Brood queen, prepping her and her teammates for the big change. The Queen would have succeeded too, if not for the timely intervention of the X-men, the Starjammers and Binary.

With all the Brood eggs destroyed, Earth seemed safe... But heck, you just can't keep a good space parasite down. A few years later, a band of Brood crashlanded their space shark (don't ask) on Earth and the game was on again.

Their game plan hadn't really changed: conquer Earth, but this time around the Brood only infected mutants so they could create a formidable fighting force of super powered Broodlings. Naturally, once the X-men got wind of the Brood's presence, they came a-running to do some emergency extermination.

That didn't go exactly as planned... The Brood had infected a mutant called Temptress, who was able to use her pheromones to... wait for it... mind control people. Temptress took control of Rogue and was bringing her and the recently re-infected Wolverine to the Brood Queen when the inevitable happened back in Uncanny X-men # 234. 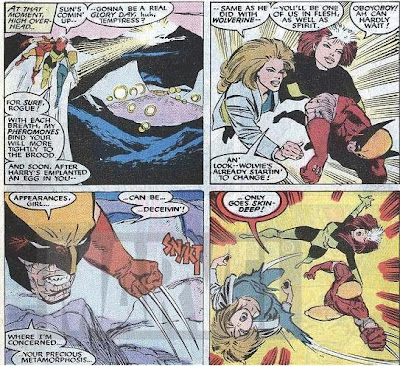 Sigh... You'd think the Brood would have caught on after the first time. You just don't waste a perfectly fine egg on the Wolverine...

Or, to coin one of Claremont's own pet phrases "That trick NEVER works!"
Posted by Clarmindcontrol at 10:23 PM