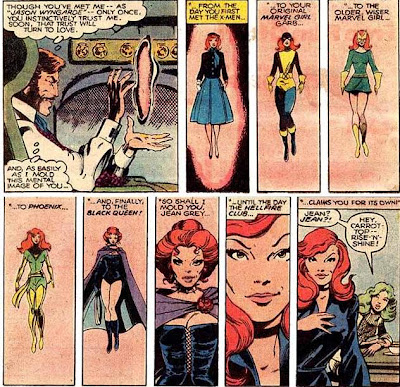 Whoops, almost messed up the chronology. In Uncanny X-men 125, the seeds are laid for the corruption of Phoenix. Former Brotherhood of Evil Mutants founding member Mastermind had been propped up in a new identity as the mysterious Jason Wyngarde. Jean was being subtly manipulated to fit her upcoming role as Black Queen of the Hellfire Club. As this picture shows, she had no idea she was being molded and prepped... 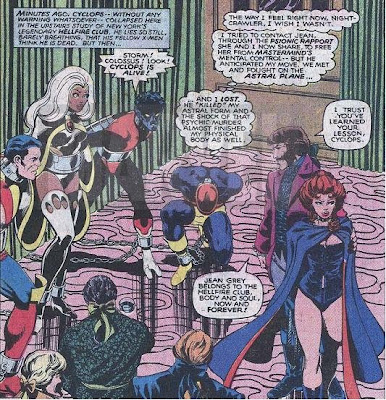 Ah yes, its come to this... In a year's worth of issues, Claremont had managed to change Jean from the strong, independent woman to Mastermind's puppet. "Jean Grey belongs to the Hellfire Club, body and soul, now and FOREVER!", or so Wyngarde boasted. A couple of pages later, the Phoenix force that was posing as Jean burst free and went on to destroy the D'Bari, aka the Asparagus People.

Posted by Clarmindcontrol at 12:22 AM