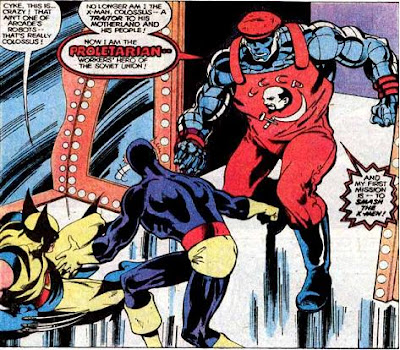 After the business in the Savage Land, the X-men got side-tracked in Japan where they fought Moses Magnum alongside former X-man Sunfire.

Magnum threatened to sink the Japanese islands with his seismic powers, but the X-men managed to prevent this from happening. After that adventure, they finally got home and enjoyed a brief respite... But before long, they got kidnapped one by one by assassin for hire Arcade.

He trapped the X-men in Murderworld and subjected them to psychological torture. The claustrophobic Storm was almost drowned, Wolverine was almost driven insane and Colossus?

Colossus was brainwashed by one of Arcade's robots posing as KGB big wig Colonel Vazhin (the Russian's answer to Nick Fury). 'Vazhin' called Peter a traitor to the Russian people, causing the young Russian to flip his wig and turn into... the Proletarian.

Ready to kill his teammates for the good of Mother Russia.

Posted by Clarmindcontrol at 11:12 PM