In the fifth and final chapter of the Karma Conundrum, we're still dealing with New Mutants # 34 and the question on everyone's mind: what's been eating Karma? Or, better put: who's been eating as Karma?

The answer is provided by Magik and Warlock, who teleported into the past to get some answers. It turned out Karma had been taken over by Amahl Farouk, an evil telepath who once fought professor Xavier to the death and lost...Wait, wait, I'll have the kids do the talking, they're awfully good at it... 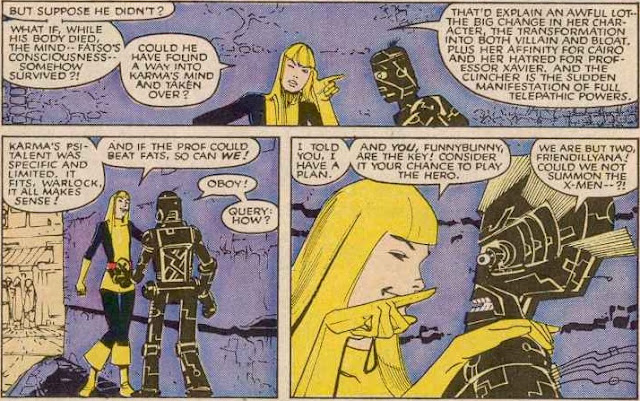 "I have a plan. And you funnybunny, are the key! Consider it your chance to play the hero."

Funnybunny? Really? Following the masterplan of someone who talks like an eight year old girl just fills me with hope and confidence of a positive outcome. Still, Warlock agrees and they both teleport away to start planning the rescue of their teammates... They'd better hurry though... 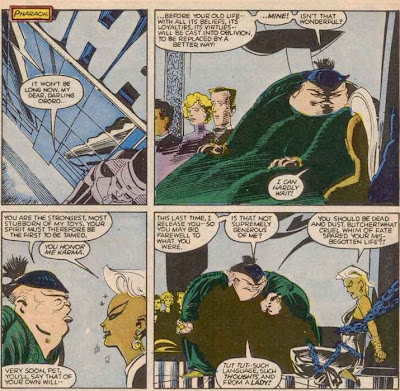 "You are the strongest, most stubborn of my toys.
Your spirit must therefore be the first to be tamed."

Man, the mental humiliation shtick is getting pretty tiresome. For a change of pace, Karma temporarily releases Storm so she can speak her own mind for the last time. After Ororo is done yelling obscenities at Farouk, yes she knew who he was straight away, Kar/mahl confirms and reveals the suspicions about how he survived ánd what he has planned for revenge... 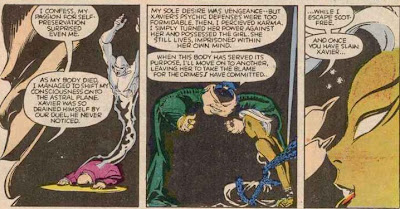 Yup, the real Karma is still alive, trapped inside her own body. And after he's done reconfiguring Ororo and the New Mutants, they'll unwittingly serve as Charles Xavier's executioners. He'll never see it coming. A brilliant plan, really... speaking of brilliant strategists... 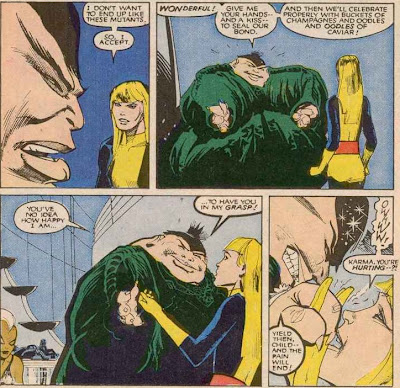 "I don't want to end up like these mutants. So I accept."

Last time, we covered how Magik allied herself with Karma and now she wants to formalise their working relationship into a permanent partnership. Sealed with a handshake and a kiss. Only, Karma actually wanted to get close so she could possess Magik too. During their struggle, Illyana's light circles quietly teleport Storm and the other captives. How she can do that while fighting Karma? Simple... She's not exactly Illyana. 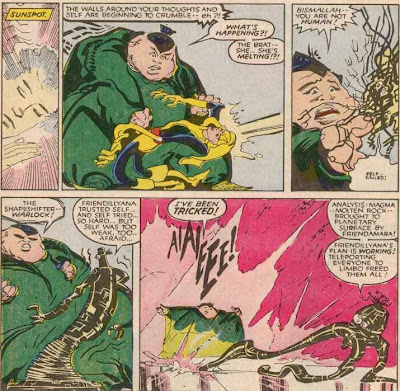 Not human? Look who's calling the pot a disembodied mental entity.

Magik's ruse worked like, erm, magic... and teleporting Karma's victims to Limbo freed them from her possession. Reunited, the team attacked their former teammate who tried to do the whole mind control thingie again... 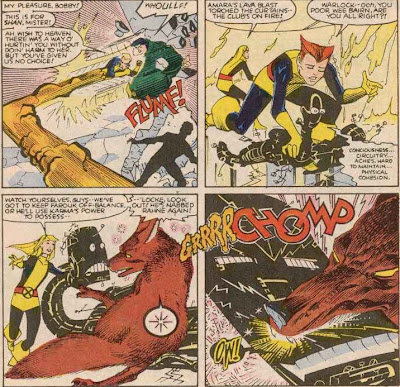 Yeah, looks like... but when Dani Moonstar used her powers to scare Farouk with his biggest fears, she expected to see professor Xavier again, just like last time. Instead, she manifested an Vietnam war era American chopper raining bullets and death. Which meant one thing: Xi'an was in possession of her own body again. But where did Farouk go then? 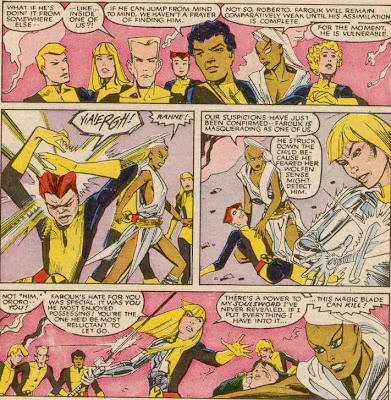 "Our suspicions have just been confirmed... Farouk is masquerading as one of us. He struck down the child because he feared her wolfen instincts might detect him."

Yeah, that makes sense... Unless you actually stop and wonder why if he was so afraid of Rahne, he didn't hide in her... Instead, he took up residence inside Storm. Or did he? 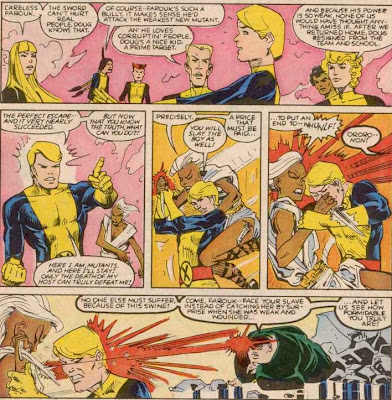 "Come Farouk... face your slave. Instead of catching her by surprise when she was weak and wounded... let us see how formidable you truly are."

Dems fighting words, Xi'an... unfortunately, all those months imprisoned inside her own mind, had left Karma's mental self as bloated and ineffective as her physical form, as Farouk tried the same trick he did when he was inside her head: pacify Xi'an with all the extatic comfort she could wish for. And she almost gave in too, if not for Storm and the New Mutants who showed up... as bees. 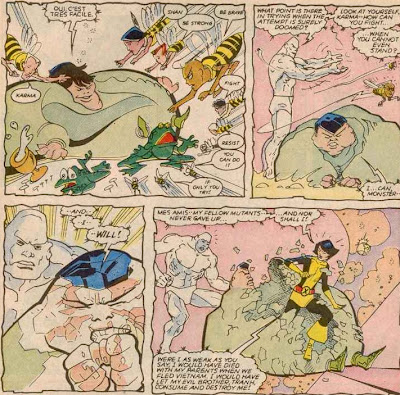 In spite of all that, Xi'an finally realises her own innerstrength and breaks out of her self imposed shell in an actually inspiring sequence. Restored and ready to fight, Karma makes short work of Farouk, transfering all the mental bulk she shed to his form and sending him on his way. Shocked, Farouk fled and sought refuge once again on the astral plane.

"I will not be his slave... better death than such a fate. Go, my friends... let the flames claim me."

Sheesh Karma, you're such a Debbie Downer sometimes... You just beat an aspect of the Shadow King... Mon dieu, that's reason enough to celebrate. Here, have a cookie, feel better. Or don't, cos, while her astral form shed the pounds, Karma's physical form was still morbidly obese after months of excessive indulgence in food and drink. Which is actually a nice way of showing the kids that victory doesn't necessarily include a happy end... or that there are no prices to be paid. 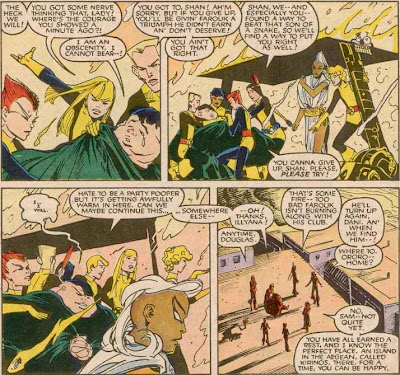 "You have all earned a rest... and I know the perfect place. An island in the Aegean called Kirinos. There, for a time, you can be happy"

The Karma Conundrum ends with Storm setting up the events of the X-men and New Mutants adventures in Asgard by taking them on a holiday to the Greek island of Kirinos...

And here's where we hit a bit of a snag in regard of Storm's presence in the story. As great a character she is, it becomes clear she's really just standing in for Charles Xavier. The Evil Karma storyline would have worked even better if Warlock had sought out the professor, after all he was the one Farouk was really after.

Ongoing storylines like the second Secret Wars and Charles' injuries after his mugging in Uncanny X-men most likely prevented the professor's presence. A shame, really... Having Illyana betray her mentor to Karma instead of Storm would have packed a real emotional gut punch. And heck, it becomes even more obvious Charles was meant to be there when Storm brought up Kirinos.

She'd never been there, it was Xavier who visited the island after returning from 'the war'. A fact he also revealed back in Uncanny X-men # 117. At the time, that war had to have been the 1950 - 1953 Korean conflict, but by the time New Mutants # 34 came out, it would have been Vietnam. 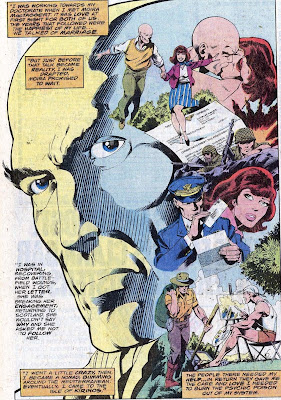 "I went a little crazy, then I became a nomad, bumming around the mediterranean. Eventually, I came to the isle of Kirinos. The people there needed my help... In return, they gave me the care and love I needed to burn the psychic poison out of my system."

It only makes sense that he'd take his traumatised students there, hoping Kirinos would do the same for them. 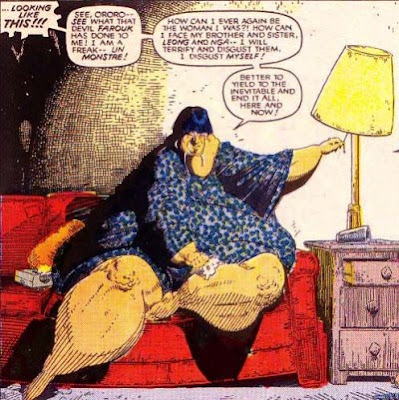 "SEE what that devil Farouk has done to me! I am a freak... un monstre!"

... Looks like there's a lot more to do on the island than just burning psychic poison.

Posted by Clarmindcontrol at 2:12 PM