Remember When The Old Mutants Mindcontrolled The New Ones? 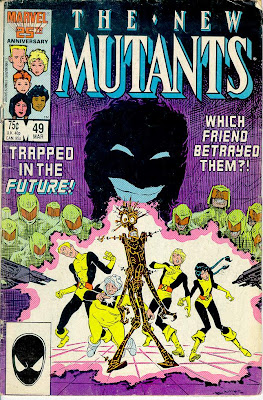 Back in # 47, Illyana tried to teleport the team back home... Unfortunately, her control over time and space was sometimes questionable at best. That's why the New Mutants got seperated and lost in space/time, ending up in very different alternate future realities. Issue # 48 saw Karma, Wolfsbane, Sunspot and Magma trying to survive in a Days Of Future Past style future, while # 49 featured the remaining members of the team stranded in a future where mutants were the ruling class.

However, that also meant humans were being repressed and that didn't sit well with Moonstar especially. That's why she and Cannonball try to steal some medicine from the mutant part of twon to give it to the needy in the human slums. Kinda like a post modern alternate future Robin Hood. 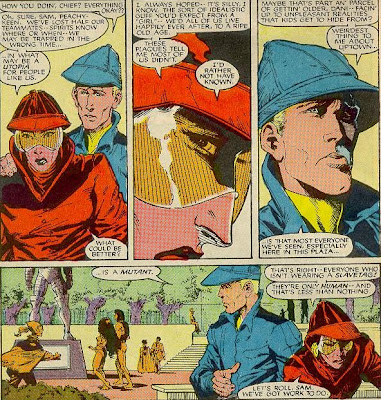 "That's right... everyone who isn't wearing a slavetag!"

Oh, that's right... the humans weren't just being treated as second class citizens, they were actively being targeted and enslaved. In fact, they were little more than breeding stock for future mutants. And as soon as a child showed any significant mutant potential, it was 'culled'. A clean way of describing this... 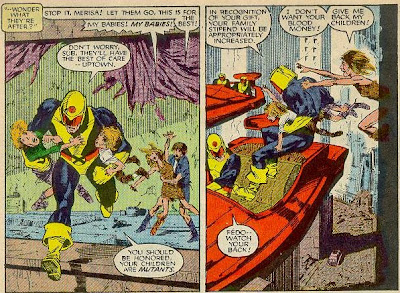 "I don't want your blood money! Give me back my children!"

Cannonball and the others engage the soldiers and manage to chase them away. Apparently, they had been stranded in this future for quite a while by the time the issue starts. They know all about the social injustice and the other crimes committed against humanity. They even meet Katie Power, formerly of Power Pack but now an old woman still trying to fight the good fight. But what they don't know, is who is running this utopia for mutants... 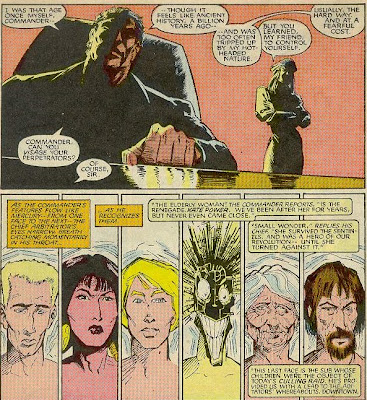 Long story short... the couple behind the table are elder versions of Magma and Sunspot. In this future, Magneto had allied the X-men and the New Mutants with the innercircle of the Hellfire Club. As the years passed, the influence of the lords cardinal grew and Sunspot and Magma took their rightful place as ruler of the club ánd the new mutant utopia.

Upon seeing the younger versions of their long dead former teammates, the elder Roberto and Amara realise the threat they could potentially form against their new world order. That's why they personally accompany the combat units assigned to take the New Mutants in. 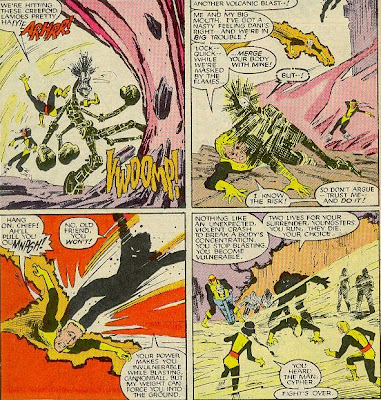 And while Warlock and Cypher... merge... the elder Magma and Sunspot prove that all those years enslaving mankind hasn't dulled their combat skills one bit. Boy, that Xavier sure knows how to teach...

The New Mutants are forced to surrender and taken prisoner. But even in captivity, they manage to cause so much trouble that future Sunspot decides they are in sore need of a... different point of view. 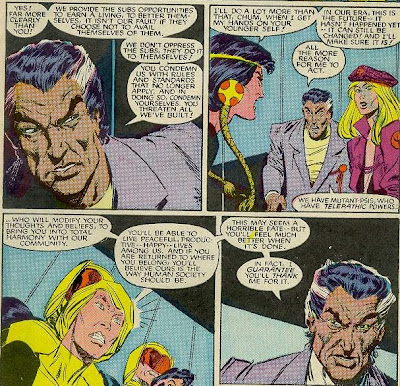 "This may seem a horrible fate... but you'll feel much better when it's done.
In fact, I guarantee you'll thank me for it."

Ahhh, yeah... blatant mind control of people from the past, with no regard for the possible repercussions to the timeline should they ever return to their own time. Roberto the elder is clearly evil, and artist Bret Blevins sure draws him that way.

'Evil future Roberto' looks a whole lot less menacing when Jackson Guice draws him in # 50. Not that the New Mutants have the energy or the free will to notice the change. While waiting for their mind control sessions, they realise they're already being subjected to an entirely different type of mental meddling. 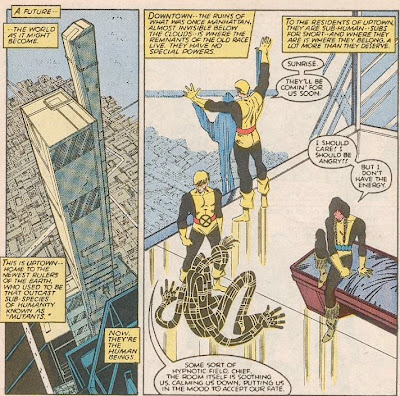 "Some sort of hypnotic field, chief. The room itself is soothing us, calming us down,
putting us in the mood to accept our fate."

Yeah... So they were more than ready to hear Magma and Sunspot's sales pitch on the whole 'let us destroy every single thing that makes you you in favor of our idea of utopia'... 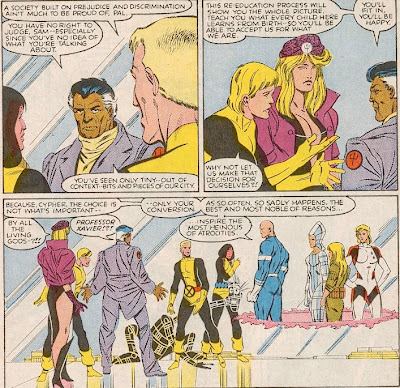 "This re-education process will show you the whole picture. Teach you what every child here learns from birth... so you'll accept us for what we are.
You'll fit in. You'll be happy."

Fortunately for the New Mutants, the Old Mutants were startled by the arrival of their really old mentor Charles Xavier... They got there with a little help from Illyana Rasputin who'd managed to locate Charles, Lilandra and the Starjammers earlier that same issue.

They really were only supposed to find and rescue the New Mutants, but Charles couldn't help himself and verbally slapped Evil Future Roberto around a little... 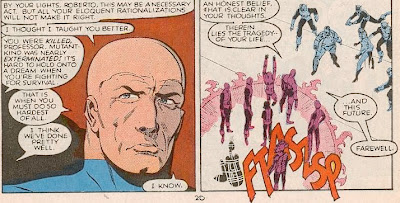 "An honest belief. That is clear in your thoughts.
Therein lies the tragedy of your life... and this future... Farewell."