Not too long ago, Not Blog X reviewed one of my absolute favorite X-men issues of yesteryear: Uncanny X-men # 273. In today's entry, we will also cover this comic, focussing on the multiple, mostly unrelated, mind control elements at play within these pages.

Call it an homage 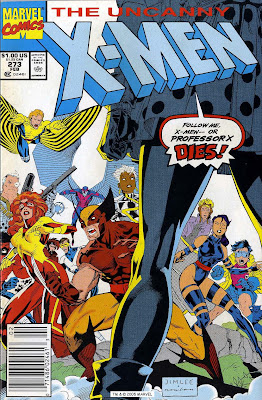 A little background info: this is the first issue after the massive X-Tinction Agenda crossover. X-Tinction (re)united the X-men and saw them fighting alongside X-Factor and Cable's New Mutants against Cameron Hodge and his Genoshan cronies. After defeating Hodge, the three teams returned home to figure out their next move.

As Not Blog X-writer G. Kendall pointed out in his review, this is actually one of the first 'down time after a big crossover' issue in the X-franchise. A moment to catch your breath, take stock and set out in new, exciting directions. For my money, Claremont first told that type of story right after Inferno when he had the X-men and women enjoy some time off back in Uncanny X-men # 244 & 245.

But in # 273, all three teams enjoyed some time off together. And most of their shared interludes involved mind control in one form or another...

The issue opened with Storm, Cable, Cyclops and Jean reviewing their many enemies. It's quite the list... 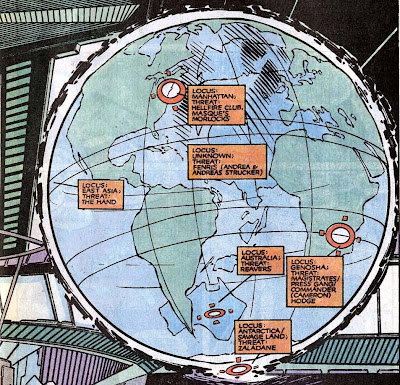 Ever the soldier, Cable proposed to take them all out methodically, essentially turning the X-men into a squad of mercenaries under his command. Disgusted, Storm and Cyclops refused his offer to turn the team into an army (... how times change). But Cable's rant did spark a little concern within Storm who wondered if both X-Factor and the X-men hadn't outlasted their usefulness.

"Are we fit caretakers for longer, for Xavier's school and his dream? Or has the time come to turn that role over to others.. as it was handed first from him to you and you to us?"

And to think Ororo doesn't even recall yet how Kid Vulcan, Petra, Sway and Darwin all but died as the not-quite-so fantastic fill in X-men serving in that brief interval between the original and Storm's team.

The answer to Storm's question just sort of hangs there though, like the black cloud she generated. After the confrontation with Cable about the future of the team, the issue gradually focused on several ongoing plot points... Like Banshee finally being able to contact his lady love Moira MacTaggert to inform he hadn't in fact perished when the Reavers (remember them from the global threat map?) blew up his plane.

Unfortunately, Moira wasn't exactly the way Sean Cassidy remembered her to be. 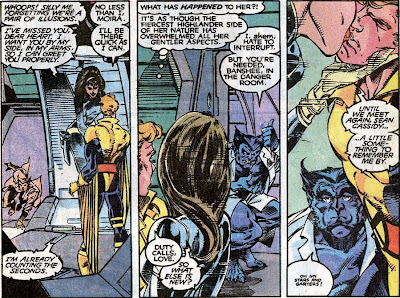 "What has happened to her?! It's as though the fiercest highlander side of  her nature has overwhelmed all her gentler aspects."

Unbeknownst to Banshee, Moira and the other people on Muir Island had fallen under the subtle influence of the Shadow King. The ever present malevolent psychic entity had been working from the shadows for months, trying to form a viable power base.

Not only operating from Muir, but also taking over another physical form, one detective Jacob Reisz. As Reisz, the King chased after Storm and Gambit, even taking a Shadow Queen in the process. But let's not get ahead of ourselves...

While Banshee struggled with how Moira had changed, elsewhere in the X-men's basement Forge and Beast pondered a somewhat similar problem... 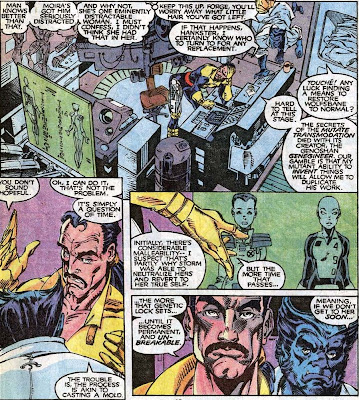 "The more time passes... the more that genetic lock sets...
until it becomes permanent and unbreakable."

The two genius level mutants are talking about Rahne Sinclair. Back on Genosha, she was turned into a mutate which meant she not only lost all her hair, but also became a willing slave thing, blindly following the commands of the Magistrates...

But in her case, the genetic reprogramming harbored an additional, cruel twist. It also made mutate Rahne fall madly in love with Alex Summers, who had been reincarnated as a magistrate (long story). this provided a second layer of mind control: she wasn't just resequenced to obey a uniform, she was also bound to someone... body and soul.... Who didn't even remotely feel the same way about her. And what's even worse: the longer it remained untreated, the harder it will be to remove.

Let's move to another X-man who only recently recovered from excessive mental tampering... 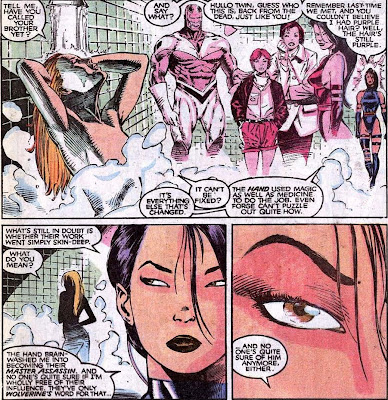 "The Hand used magic as well as medicine to do the job.
Even Forge can't puzzle out quite how."

Y'know, for an alleged mutant miracle worker, Forge sure can be a bit of a let down sometimes. He was unable to figure out a cure to Rahne's mutation and now he's clueless on the subject of Psylocke's transformation... all the while, Betsy herself is openly wondering if she might not still be serving the Hand in some way.

She shared all this with Jean Grey, surprisingly enough...a woman she only met once, rather briefly, during Inferno.

Yet here they are, conversing like long lost friends while one takes a shower and the other watches. No implied subtext there whatsoever. Ow, grow up... After her talk with Psylocke, and still mulling over the things Cable said earlier, Jean found herself in the Cerebro room.

And even though she'd lost her telepathy over in X-Factor, she still donned the mutant scanning apparatus hoping to trace the missing X-men on the astral plane. 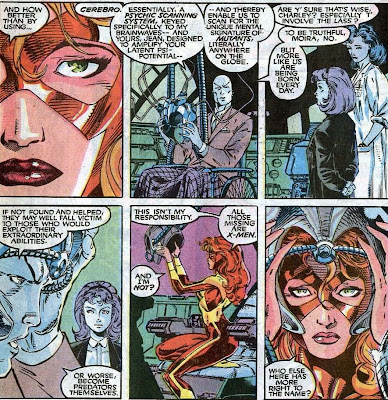 "Cerebro. Essentially, a psychic scanning system, keyed specifically to my brainwaves...
and yours, Jean... Designed to amplify your latent psi-potential."

In the years that followed, Kitty Pryde had redesigned Cerebro so even non-telepaths could use it to track their fellow mutants, albeit with significantly more trouble and headache. But apparently, even though she was presumed dead at the time, the Cerebro system was still keyed to Jean's brainwaves and off she went on to the astral plane. 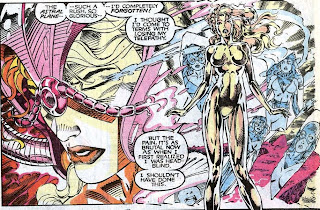 However, she discovered a bit more than she bargained for. 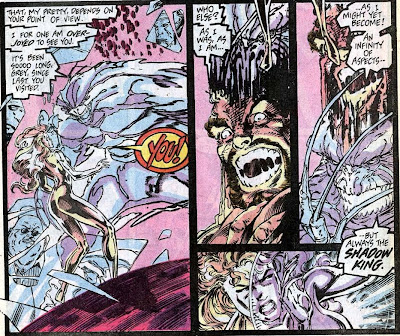 Oh Lord, not this creep again... 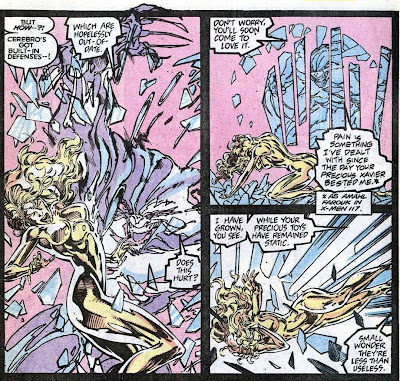 "Does this hurt? Don't worry. You'll soon come to love it."

The King does make a good point. After Xavier went into space back in # 200, they didn't give the astral plane so much as a second look. Psylocke used it once or twice during the Morlock massacre and Magneto put on the helmet on occassion, but it had been long since a proper telepath explored the astral plane or even updated Cerebro's protocols, allowing the Shadow King to grow more powerful and even bring allies like Lian, his Shadow Queen... 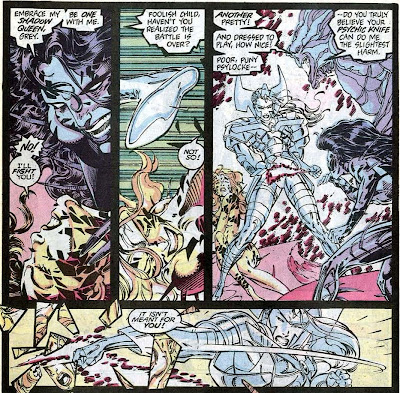 "Embrace my Shadow Queen, Grey. Be ONE with me."

Luckily, Jean had allies too. Psylocke used her psychic knife to literally cut her out off the astral plane, beyond the Shadow King's reach. So, another threat to add to the big board, eh? Well, kinda.

'Who was it that attacked you?"

In a bit of a convenient cop out, Psylocke's psi-knife messed up Jean's memories of the incident. She has no idea it was the Shadow King, even though Psylocke was in earshot when Lian called herself the Shadow Queen, so assuming the big monster might be the Shadow... King... wouldn't be the biggest stretch. For now, all they knew that there was 'something' wrong on the astral plane... 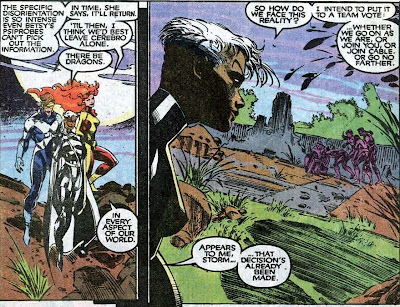 Still, the point is moot, because the issue closes with the X-men getting kidnapped by Lila Cheney to the Shi'ar empire where they'd fight an evil, mind controlling Charles Xavier for a couple of issues before realising in # 278 he was actually a disguised Warskrull. We all covered it here.

Point is: within minutes of being rescued, Charles (still naked and covered in Skrull bio-gunk) became aware of the Shadow King when Banshee mentioned Moira's odd behaviour and Storm started infodumping, trying to cover the events of the past 75+ issues in a single panel. 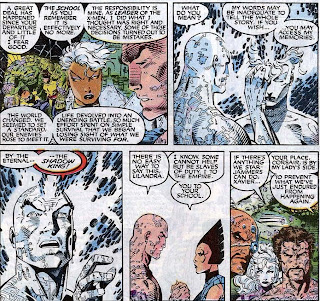 So, how's that for keeping the story moving forward? When you least expect it, Chris Claremont neatly weaves multiple plotpoints from # 273's 'downtime' issue into a single, mind control heavy thread as professor Xavier returns home to deal with the Shadow King once and for all.

Posted by Clarmindcontrol at 8:23 AM