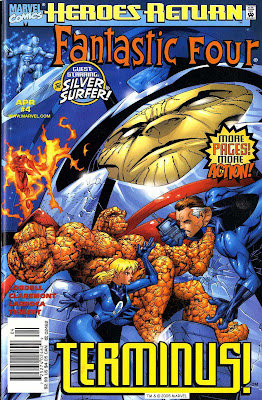 Claremont's tenure on the book is quite interesting, least of all because he was never supposed to be writing the title after Marvel relaunched it in the wake of the Heroes Reborn fiasco. Nope, it ws up to Scott Lobdell and Alan Davis to tell the tales of Marvel's first family... and they did.

Just why Lobdell and Davis were removed from the book has never been revealed. Most likely, a falling out or editorial spat can be blamed. Fact remained: Scott & Alan were gone and the double sized fourth issue of Fantastic Four needed to be written. Chris Claremont, working on staff at the time, stepped in and picked up the slack while also using several of the ongoing storylines. After all, issue # 3 ended with an imminent threat to Mole Man and all of Subterranea... 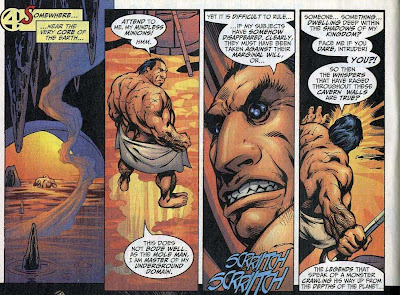 "Attend to me, my mindless minions!"

Seeing that Danny DeVito lookalike halfnaked and without his trademark glasses is worth the 1.99 cover price alone. So, something was hiding in the dark, secretly claiming Mole Man's faithful servants. Wonder who it could be? 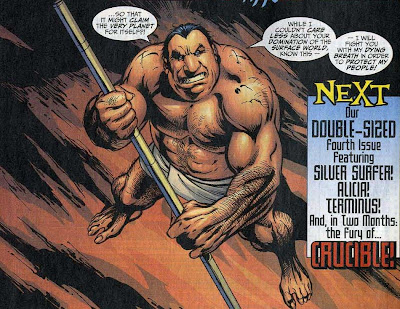 "While I couldn't care less about your domination of the surface world, know this... I will fight you with my dying breath in order to protect my people!"

An impressive speech and an even more impressive choice to keep the identity of this mystery villain under wraps. Makes you want to rush out and buy the next issue to find out who it is we're dealing with... That is, unless you read the 'next issue' promo blurb and find out who the baddie is. And no, it isn't the Silver Surfer... Or Alicia Masters.

Working from Lobdell's established storylines, Claremont dutifully penned #4, which saw the Silver Surfer and his companion Alicia seek out the Fantastic Four's help in tracking down the same threat the Mole Man had been facing underground. The Surfer guided the Fantastic Four to the source of the disturbing energy readings he had picked up... and it turned out to be in the middle of a small town in Canada, where the people behaved... oddly. 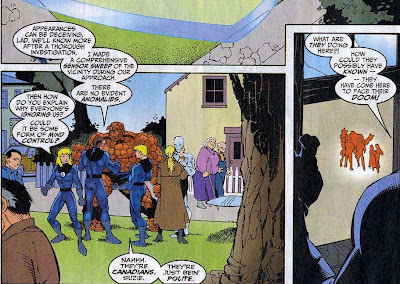 "Could it be some form of mind control?"

Ha! Kudos for the self deprecation there, Chris. As it turns out, no, the citizens of Yorkton were in their right minds... But, being Canadian, they were ignoring their famous guests to be polite. Still, the local arm of the law did show up to get some answers... and to get some handy dandy additional exposition out of the way as well. 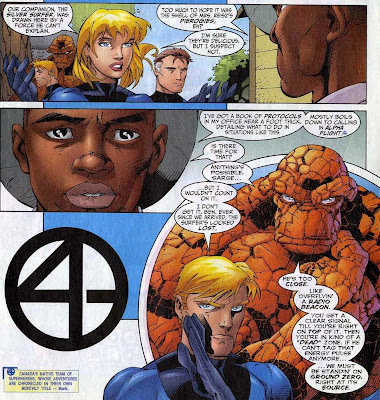 You can't help but admire Salvador Larroca's dutiful sense of filling the entire page. If the talking heads don't quite cover, just thrown in the logo. Whatever works, right? Also: kudos to Claremont for remembering that Ben Grimm worked as a (test)pilot before turning into the Thing. His explanation of radio beacon blindness is factual, informative and makes him seem like a well rounded character for a change.

In spite of the Surfer's temporary 'blindness', the story progresses when Mole Man comes stumbling out of the local church to greet his oldest adversaries. The usually grandiose ruler of Subterranea is remarkably subdued and as the FF follows him inside, they learn why... 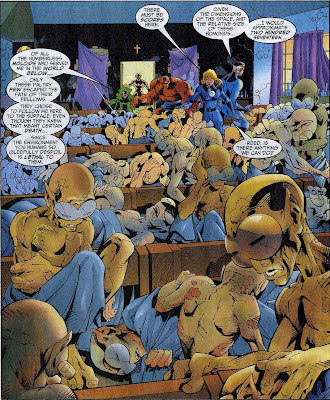 The Moloids are suffering from a mysterious, seemingly lethal infection. The FF promise to help look for a cure, but before they can get to work the church is attacked by Terminus, an old foe of both the Avengers and the Fantastic Four.

Originally created by John Byrne to be a new type of Galactus-level threat, Terminus is a giant, planetary scavenger that raids an entire world's natural resources so it can sell it to the highest bidder. And this time around, Terminus is after more than gold, oil or uranium... 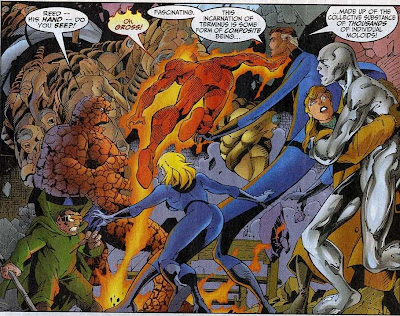 "Fascinating. This incarnation of Terminus is some form of composite being... made up of the collective substance of thousands of individual Moloids!"


Sounds pretty awful, makes you wonder what... Oh, what's that, Reed? You have more to add? Well, go ahead then... 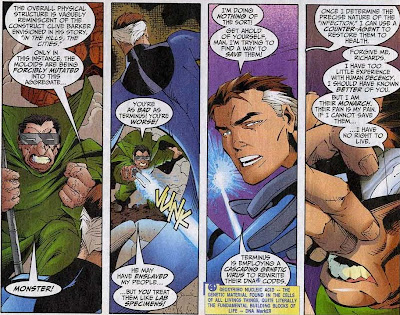 "Monster! You're as bad as Terminus! You're worse! He may have enslaved my people...
but you treat them like lab specimens"

Standing around hearing his sworn enemy compare a creature comprised of your followers as 'something reminiscent of Clive Barker story' makes Mole Man mad. His people are more than lab specimens, or so he claims. That's actually a little rich, considering he's ruled the Moloids with an iron fist for years, caring very little about their survival... 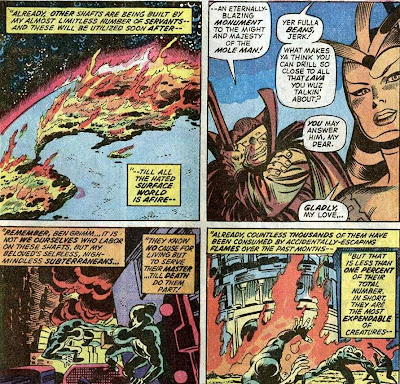 "It is not we who labor on these shafts, but my beloved's selfless, nigh-mindless Subterraneans... Already, countless thousands of them have been consumed by accidentally escaping flames over the past few months."

But hey, I get how Mole Man might be affected by watching helplessly as his faithful servants were getting absorbed into the collective creature calling itself Terminus... Their hapless, numb features an ever present reminder he had failed them. Luckily, the Silver Surfer decided to use the power cosmic he's known for... 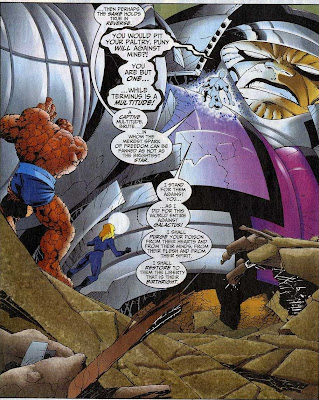 Terminus actually deemed himself the liberator of the Moloids... even though his idea of liberation was consuming their very mind and bodies. But that didn't prevent the Silver Surfer from using his powers to free the Moloids...

"This incarnation of the behemoth has been laid to rest.
No trace of him remains along the Moloids."


So all's well that ends well... Back to underground enslavement, you Moloids you. Ya know ya love it!
Posted by Clarmindcontrol at 8:27 PM

Thanks for the great post! That Danny DiVito line had me literally laughing out loud.

I've been fascinated with Mole Man recently, as you can tell from my blog: http://cobyscomics.blogspot.com/2013/09/ultimate-mole-man.html. He is such an interesting character!